A 400-pound bear took a trip to a LA suburb, and residents were fascinated 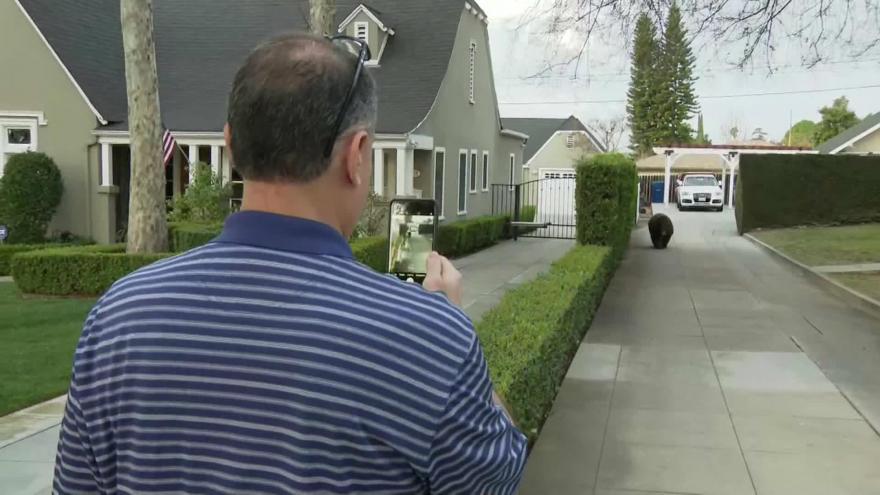 The bear, in the distance, doesn't have a care in the world. California authorities tranquilized the 400-pound bear after the creature was spotted taking a leisurely stroll through a residential neighborhood.

(CNN) -- California authorities tranquilized a 400-pound bear on Friday, after the creature was spotted taking a leisurely stroll through a residential neighborhood.

The bear decided to take a day trip to Monrovia, California -- just outside of Los Angeles -- on Friday morning, according to CNN affiliate KCAL. Undoubtedly, she was bored of her forest living and wanted a change of pace.

As news vans, paparazzi and curious residents followed her around, she didn't seem to mind the fame -- ambling along the sidewalks and visiting the local sites, like homes and schools.

"It's nice to be able to get this close," resident Elizabeth Riteholz told KCAL.

And residents were indeed able to get quite close to the bear, who, like any vacationer, seemed rather languid during her stay. She didn't really show any aggression toward the locals, KCAL reported.

Eventually, officers from California Fish and Wildlife tranquilized the bear, moving her to the Angeles National Forest.

The agency told KCAL that the bear was probably just hungry, and that bears will often visit neighborhoods on trash day in search of food, the agency said.

It was, in fact, trash day in Monrovia when the bear decided to visit, KCAL said. And who among us hasn't traveled great distances for a tasty snack?