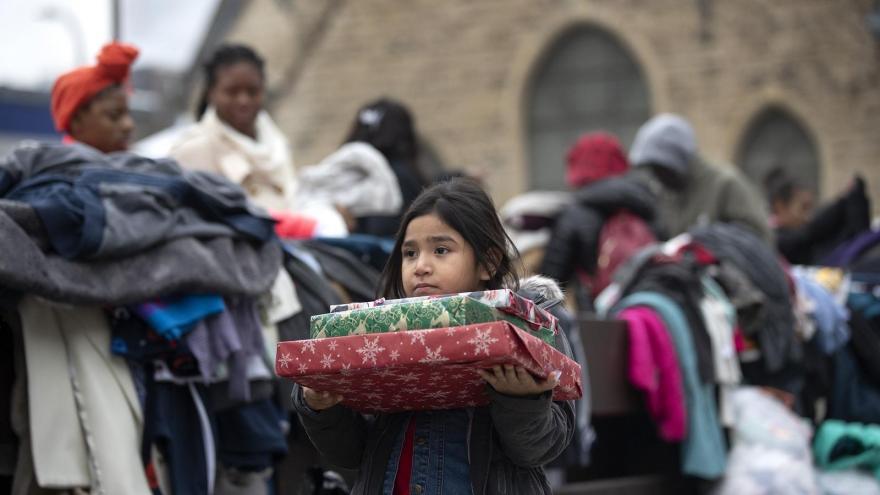 (CNN) -- The Minneapolis community has made so many donations for the more than 200 people displaced on Christmas by a four-alarm fire that officials had to stop accepting the outpouring of diapers, socks, mittens, blankets and other essentials.

"I've lived in Minnesota a long time and I've never seen anything like this here," Tiana Terry, one of the fire victims, told CNN affiliate WCCO. "So, this made me have more hope in my city."

Crews concluded fire suppression efforts on Thursday afternoon, the Minneapolis Fire Department tweeted. The cause of the fire remains under investigation.

"These are real people that need a roof over their head, who need help," Mayor Jacob Frey told the Star Tribune. "These are people's lives. This is their home. They're concerned about everything from a wallet or a phone so they can get in touch with a loved one on Christmas, to where is their baby going to get formula."

With temperatures dipping into the 30s, Metro Transit provided buses to keep warm the residents who were suddenly without a place to stay, spokesman Howie Padilla said. The Red Cross provided food and drinks, Tyner said, and they also worked to make arrangements for victims to find a place to stay overnight.

But for all the other essentials, WCCO reported, Minnesotans came to immediate aid.

Donations were brought in such large numbers in just a few hours that officials had to stop accepting them and ask that people give money instead, the station reported.

Brothers Andrew and Brandon Brundidge even brought their own presents to donate to the fire victims.

"I decided we should take some of our Christmas gifts and donate them to the kids and people that lost things in the fire, since they're probably having a rough Christmas," Andrew Brundidge, who gave his autographed Kyrie Irving basketball sneakers to one of the children, told the station.

"I decided to give it away because I was so excited to play it," he said.

Fire surges after officials report it was controlled

There have been no reported deaths at this time, but three people with minor injuries were taken to the hospital. One person had suffered smoke inhalation, and two others suffered minor injuries when they evacuated the building.

A tweet around 3:30 a.m. (4:30 a.m. ET) said four hotel rooms had caught fire on the second story of the three-story hotel. Rescuers were searching the building and the evacuation was near completion.

Shortly thereafter, the department reported most of the blaze had been "knocked down" and rescuers had finished searching the building.

Around 3:50 a.m., crews on the third floor reported that the fire had spread to the hotel's attic and then to the third floor. Crews themselves evacuated the building about 30 minutes later, "switching to an exterior defensive attack," the department tweeted.

It's unlikely the entire building can be salvaged, Tyner said.

Built in 1926 as a luxury hotel, the Drake Hotel now serves as temporary housing for the homeless and as an overflow shelter when other shelters are full, the Star Tribune reported. It has 146 rooms.