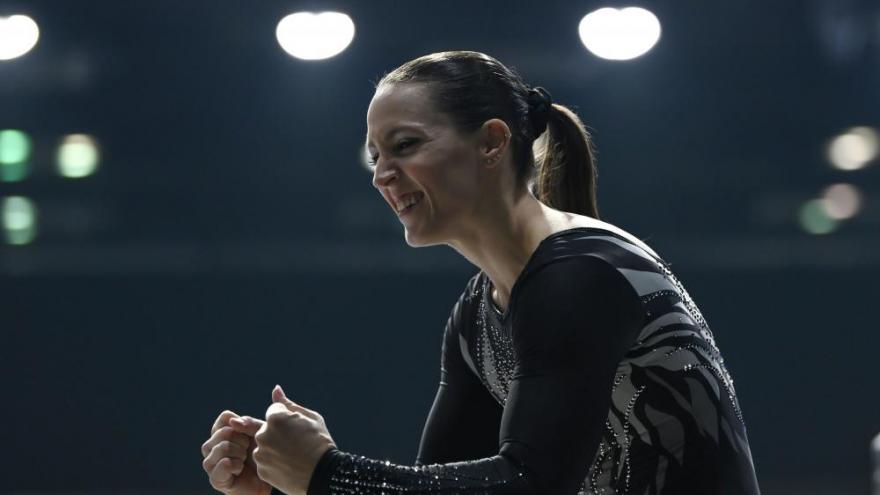 Chellsie Memmel celebrates after competing on the balance beam at the Indiana Convention Center in Indianapolis.

(CNN) -- An Olympic silver medalist and mom of two children came out of her nine-year retirement at age 32 to compete in a gymnastics tournament Saturday.

Chellsie Memmel competed in two events at the GK US Classic in Indianapolis, scoring 13.750 on the vault and finishing with an 11.800 score on the beam.

The Wisconsin native won an Olympic silver medal in 2008, and in 2005 she was first US woman to win the all-around gold medal since 1994 when Shannon Miller won her second straight title, according to her bio.

Memmel decided to return to the sport from her hiatus to get in shape after having children, according to NBC Sports Network.

"I love doing gymnastics," the mom of two said following the competition. "There's definitely are those hard days, but those days are the ones where I'm like remembering 'You're just pushing yourself. You're having fun. You're seeing how far you can actually take this when people said 'you should have retired when you were 20 or when you're 24. You can't have kids and come back to a sport."

Memmel said she didn't know how she would feel when she got back on the floor but was happy she did.

"I feel like this is a win," she said. "I didn't know what to expect honestly when I got out on the floor ... obviously beam didn't go as I wanted but I'm happy. I put myself out there and I couldn't have asked for a better day."

Memmel said she hopes her return to the sport encourages others to follow their passions and chase their dreams.

"I just wanted to put that message out to anybody who thought they missed their chance at something or didn't get a chance to try it," she said. "No one should be stopping you. Just don't hold yourself back."