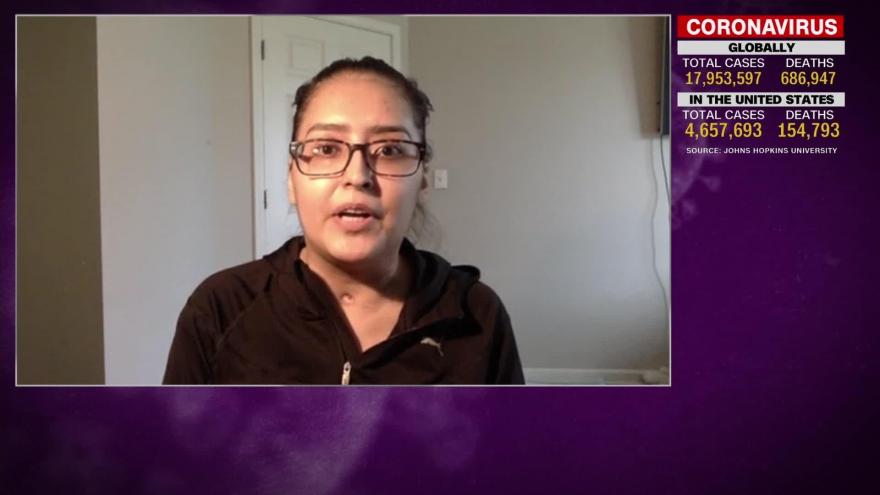 (CNN) -- Mayra Ramirez says she was careful about following every health precaution she could before the day she was admitted to a Chicago hospital with coronavirus symptoms.

The 28-year-old arrived at the Northwestern Memorial Hospital's emergency room on April 26 and within minutes -- giving her barely enough time to call her family -- her harrowing experience began.

"All I remember was being put to sleep as I was being intubated and then six weeks of complete nightmares," she told CNN. "Some of the nightmares consisted a lot of drowning and I attribute that to not being able to breathe."

Coronavirus had taken a deadly toll on her body: her lungs had been irreversibly damaged and other organs were beginning to fail, she said. After Ramirez spent more than a month on a ventilator, her family flew from North Carolina to say a final goodbye after she says doctors announced they were unsure if she'd survive.

There was one option to save her life: a double-lung transplant.

"Without the transplant, she would not have made it," Dr. Ankit Bharat, the chief of Thoracic Surgery at Northwestern Medicine in Chicago, adding Ramirez had multiple complications linked to the virus.

The fact that she was young and had otherwise been healthy, he says, made her a good candidate for the rare procedure.

"I looked at myself and I couldn't recognize my own body," Ramirez said, after waking up in the hospital following her procedure. "I couldn't talk, I could barely lift a finger, I couldn't move. I was in a lot of pain, I was very confused."

Ramirez is now the first known American to have undergone the procedure after a battle with coronavirus, according to a news release from Northwestern Medicine. It's been now nearly two months since the surgery and she's recovering at home. She says she's still weak and struggling to breathe.

She's one of more than 4.6 million Americans who have been infected with coronavirus. At least 154,860 people have died.