A 194-year-old apple tree, the matriarch of the Northwest apple industry, has died 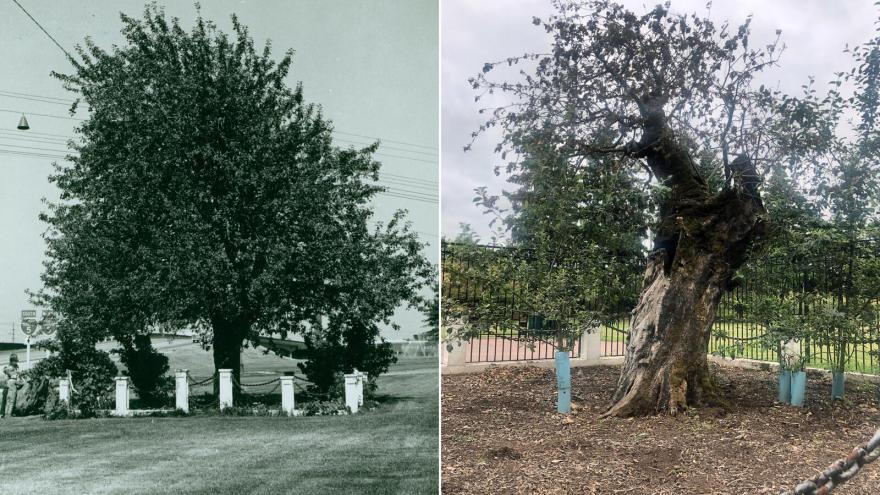 The Old Apple Tree in Vancouver, Washington, in an undated historical picture, left, and in 2020.

(CNN) -- An apple tree thought to be the oldest in the Pacific Northwest has died this summer at 194 years of age.

The Old Apple Tree in Vancouver, Washington, was planted in 1826 when fur traders of the Hudson's Bay Company settled in the area. It was considered the matriarch of the region's bustling apple industry and produced a green apple that was bitter to the taste but great for baking.

"While we knew this day would come, we hoped it was still years away," Charles Ray, urban forester for the City of Vancouver, told CNN.

Around 2015, the team of experts caring for the tree noticed that the cambium layer -- the growing part of the trunk -- was starting to die back, Ray explained. That contributed to the creation of a spiral crack in the trunk, which hollowed out over the years. The tree finally died in June.

"The tree itself has taken on its own persona. It's a living organism, just like us, and it's been faced with a lifetime of challenges," Ray said. "It stood there for generations and witnessed the world change around it."

The Old Apple Tree weathered countless storms and the construction of railways and highways in its vicinity, becoming a beloved community landmark.

"Local schools would take trips to the tree, it has touched generations of people throughout the Northwest, and probably around the nation," Ray said.

The tree is a well-known celebrity among heritage apple experts, who are interested in preserving and studying ancient kinds of apples originally planted by early settlers.

"When anybody speaks of the oldest apple tree in the Northwest, everybody knows it was that apple tree," David Benscoter, a retired FBI agent who now runs "The Lost Apple Project" told CNN. "I'm sure people never thought it could reach that age," Benscoter said.

RELATED: 10 kinds of apples that were thought to be extinct have been rediscovered

In 1984, a public park was built around the tree, and since, every October the city has held a festival to celebrate it. This year's edition was canceled due to the coronavirus pandemic.

On Sunday, members of the Vancouver community held a memorial for the tree on Facebook, sharing stories and memories.

Legend has it that The Old Apple Tree came to Vancouver as a seed, transported by a British naval officer.

Royal Navy Lieutenant Aemilius Simpson received the seeds at a dinner in London before departing for the Hudson's Bay Company's fur trading outpost in the Pacific Northwest.

"A young woman that was there with him, as she was bidding him farewell, slipped a few apple seeds from her dessert into his jacket pocket, and suggested that he plant those when he reached the Northwest," said Brad Richardson, executive director at the Clark County Historical Museum.

After arriving at Fort Vancouver, Simpson handed the seeds to Chief Factor John McLoughlin, who oversaw the establishment of local orchards and gardens for sustenance.

Notably though, the tree is not located within the perimeter of the historic Fort Vancouver's orchard, but about half a mile away from it, in what would have been the living quarters for workers on the Fort. Specifically, it's possible that the tree initially grew in the yard of a house where John Johnson, a British cooper, lived with his wife, according to a history of the Old Apple Tree written by National Parks Service archaeologist Robert Cromwell.

Later on, the Fort became a US Army base, and among those who served there was Ulysses S. Grant.

That's not the only time in its long life that the Old Apple Tree had a brush with presidential history.

Richardson said that in 1934, President Franklin Delano Roosevelt, visiting the area, was presented with a pie baked with apples from the tree. The pie was baked by Ms. Fay Peabody, the "official apple pie baker" of Oregon and Washington, according to news reports of the time.

RELATED: On the hunt for rare seeds in the middle of a pandemic

A descendant of the Old Apple Tree was planted near the Clark County Historical Museum in the 1950s, according to Richardson.

"It'll dump a whole bunch of these green apples all over our walk every year," Richardson said. "It produces very prolifically."

Apples produced by the Old Apple Tree were dubbed "English Greenings," a generic classification used to describe old-world apples, according to Charles Ray.

"The Old Apple Tree is not identical to any other named variety in a worldwide collaborative data set of several thousand apple variety DNA profiles," Cameron Peace, a professor of tree fruit genetics at WSU told CNN.

"The Old Apple Tree is therefore unique, one-of-a-kind. It will carry genetic factors not present in other heirloom or modern cultivars," Peace added.

Scientists were able to establish that the Old Apple Tree is almost certainly a grandchild of the French Reinette, a 500-year-old variety dubbed "the grandmother of all apple cultivars," Peace explained. The French Reinette is a close direct ancestor of most modern varieties and also a parent or grandparent to many heirloom varieties.

As the Old Apple Tree's trunk was dying over time, several "root suckers" -- or new shoots -- started coming out of its root system.

"We made the determination to start nurturing these root suckers so that in the future we would have a new tree," Charles Ray told CNN.

"It's still the same root system, the same tree growing within that location," Ray added.

One of the saplings will remain in the same location to become the "new" Old Apple Tree over the years. Part of the original trunk will be removed to allow more light for the new tree, but part will remain on site to decay and illustrate the life cycle of trees.

"It will still be referred to as the Old Apple Tree to assure this legacy lives on," Ray said.

The other saplings will be transplanted to the nearby Fort Vancouver historic orchard managed by the National Parks Service, according to Ray.

Do you own a piece of the Old Apple Tree?

If you attended the yearly Old Apple Tree Festival in Vancouver over the years, chances are you might be in possession of a living piece of the Old Apple Tree.

Since 1984, festival visitors would receive cuttings from the tree in every edition to be planted in their backyards.

In Ray's estimation, around 200 cuttings would have been given away each year.

"Over the years, people would come back and tell us stories, their memories of the tree, and whether or not their cuttings took or were starting to grow -- from all along the Pacific, all along the West," Ray said.

Ray believes that getting involved with community forests and planting trees is a great way for people across the nation to make history, "so that in 20 years, or 200 years, there will be heritage trees for others to enjoy and stories to be told."