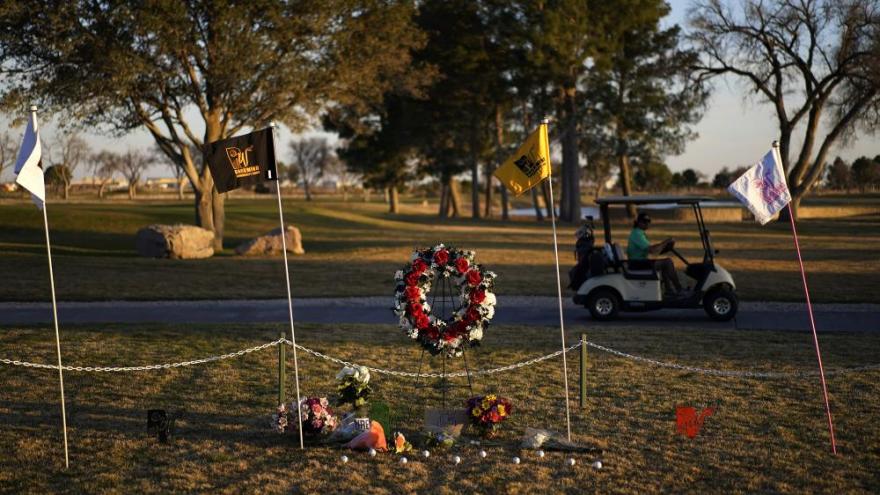 A makeshift memorial for the crash was set up at the Rockwind Community Links in Hobbs, New Mexico, on March 16.

(CNN) -- A 13-year-old boy drove the pickup truck involved in a fiery head-on collision in Texas that killed nine people, including six University of the Southwest golfers and their coach, a National Transportation Safety Board official said Thursday. The 13-year-old died in the wreck, along with an adult who was riding with him in the pickup.

Investigators were able to identify the remains of the driver by his size, NTSB Vice Chairman Bruce Landsberg said.

Preliminary information indicates the left front tire of the pickup was a spare that failed, causing the vehicle to pull hard to the left into oncoming traffic of a two-lane roadway, Landsberg said. Both vehicles were probably moving close to the posted speed limit of 75 mph, he said.

In Texas, a minor can begin the classroom part of a driver education course at 14 but must be at least 15 to apply for a learner license, according to the public safety department website.

Henrich Siemens, 38, of Seminole, Texas, was in the truck with the boy, authorities said. He was among the nine people killed in the Tuesday evening crash.

Two survivors of the crash, both students, are still hospitalized.

"One of the students is eating chicken soup," Tipton told reporters. "I spoke with the parents and they are there with them and they are recovering every day. It's a game of inches and every hour leads to them one step closer to another day... There is no indication as to how long it's going to take but they are both stable and recovering and every day making more and more progress."

According to the Texas Department of Public Safety (DPS), a Dodge 2500 pickup drove into the approaching lane of a highway just outside Andrews, Texas, and hit a Ford Transit van carrying members of the New Mexico university's men's and women's golf teams.

Six students and a coach in the van were killed as were the driver of the pickup and a passenger. Two other golfers were initially in critical condition at University Medical Center of Lubbock, Texas, according to the Texas Department of Public Safety.

The NTSB dispatched a 12-member team to investigate.

Landsberg said in it's unclear why the full-sized spare blew out before the crash.

"On the highways 100 people (are killed) a day," he said. "Every two days we are killing the equivalent of a Boeing 737 crashing. Now just think about that. That's what's putting this into perspective. And it's long overdue that we start to do something about it."

On Thursday, at least six people were killed in a multi-vehicle accident on Interstate 57 in Missouri, the Mississippi County Coroner told CNN.

Emergency responders heading to the crash were told by a dispatcher there were two vehicles on fire with people trapped inside, according to recordings on Broadcastify.com, which monitors radio traffic among many emergency departments.

One of the first responders to arrive said: "All units, I've got wrecked units on both sides of the highway, fully involved vehicles. I'm still trying to get up on scene and see what we have."

Members of the men's and women's golf teams at the University of Southwest were traveling back to their Hobbs, New Mexico, campus from a tournament in Midland, Texas, school officials said.

The remainder of the two-day tournament, hosted by Midland College, was canceled. There were 11 schools in the competition, which included both men's and women's teams, Midland College Athletic Director Forrest Allen said.

The weather in the area of the crash was clear with no fog, CNN Meteorologist Chad Myers said. There were no freezing temperatures, and the wind was light at around 5 to 8 mph.

'Crushed and broken but strong'

As investigators worked to determine what caused the deadly collision, the University of the Southwest is dealing with the emotional toll on its community.

"Our institution is crushed and broken but strong," Paula Smith, the university's vice president for financial services, said Thursday.

Many students at the small Christian university -- with an enrollment of about 1,100 students, including about 300 on campus -- will be returning from spring break over the weekend, and the school is planning a memorial assembly for next week, according to Tipton, the provost.

"These aren't the kind of things that you ever even dream of happening. And they shouldn't happen," he said.

Tipton said officials have said they may never know what caused the pickup truck to veer into the van's path.

"For any of you that have lost a loved one or a member of your family, it's the same feeling here," he said. "They're not only students and coaches. They are loved ones to us. They are members of our family here on campus."

One victim was Laci Stone, a freshman member of the women's golf team who was majoring in global business management, according to a family member.

"Last night Laci's golf team was involved in a crash leaving a golf tournament. Our sweet Laci didn't make it.," Laci's mother, Chelsi Stone, posted on Facebook. "Our Laci is gone! She has been an absolute ray of sunshine during this short time on earth."

Laci, 18, of Nocona, Texas, was one of three siblings.

"We will never be the same after this and we just don't understand how this happened to our amazing, beautiful, smart, joyful girl," her mother said.

The school identified the other students who died as Mauricio Sanchez, 19, of Mexico; Travis Garcia, 19, of Pleasanton, Texas; Jackson Zinn, 22, of Westminster, Colorado; Karisa Raines, 21, of Fort Stockton, Texas; and Tiago Sousa, 18, of Portugal.

USW President Quint Thurman confirmed the death of coach Tyler James, who was 26.

"Great coach and a wonderful man," Thurman said in an email. "Don't make them any better!"

James' bio on the school website said he was in his first season as head coach and played golf at Ottawa University and Howard Payne University.

"He always cared for us and made sure we were always doing good on and off the golf course," said freshman Phillip Lopez, who did not participate in the tournament.

"I just can't believe that my teammates and my coach are gone," Lopez told CNN.

A memorial of flowers and golf balls has been set up at the teams' home course, Rockwind Community Links in Hobbs, CNN affiliate KCBD reported.

Correction: An earlier version of this story misidentified the driver of the pickup. It was a 13-year-old child, according to the NTSB.