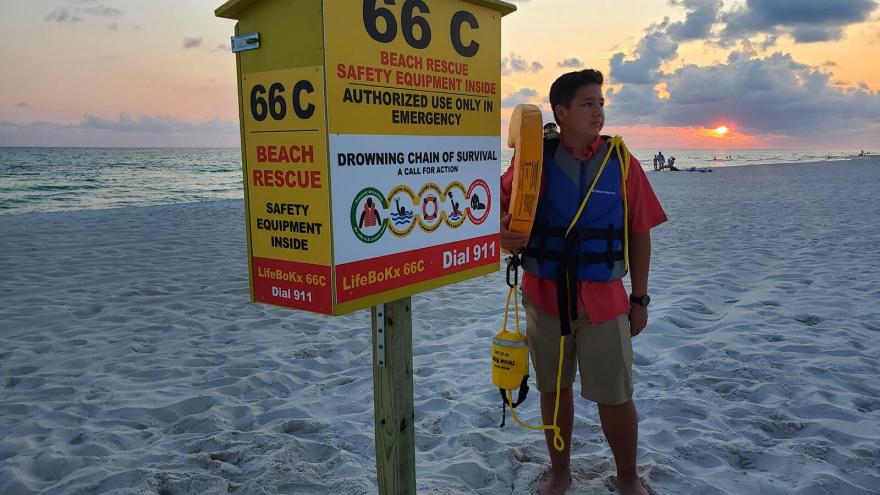 (CNN) -- Florida shores may soon become a bit safer thanks to the ingenuity of 13-year-old Kaial Hajik in Panama City Beach.

After hearing of several drownings in the Gulf of Mexico over the past few years, Kaial, a Boy Scout and aspiring Air Force Academy cadet, worked with his father to devise a emergency kit prototype called the "LifeBoKx".

"It's very simple... but it's also very important in order to saving somebody's life," Kaial said in an interview with CNN affiliate WJHG.

The LifeBoKx contains basic lifesaving equipment and educational material to be positioned along the shoreline of Panama City Beach. The idea, Kaial's father, Joe Hajik, told CNN, is not just to save those drowning but to also provide resources for those responding to an emergency.

The emergency kit includes two life vests, a tethered life preserver and visual aids including the "Drowning Chain of Survival," a visual representation from the International Life Saving Federation detailing how to safely respond to a drowning.

Kaial and his father say the story of Richard Stacey Redman is a major motivator for the creation of the LifeBoKx. Redman drowned on Panama City Beach in 2019 attempting to rescue a drowning child.

"What we saw is that it's not just people drowning. It's actually the pursuers -- working to help save these people -- that are the ones that are perishing," Joe Hajik told CNN.

The LifeBoKx is just an idea for now, but the father-son team envisions positioning the emergency kits throughout the Panama City Beach shoreline. Each kit would be assigned a specific identifier to facilitate a quicker response from lifeguards and emergency personnel.

Drownings in the area have increased over the years, with 10 in 2018 and 12 in 2019. This year, Panama City Beach has witnessed eight confirmed drownings, according to city officials, with strong rip currents a main factor.

In response, the city implemented new protocols at the start of the year, including public education initiatives. And it expanded its lifeguard programs and emergency response presence along the beaches.

Wil Spivey, director of the newly created Beach Safety unit -- part of the city's fire department -- was a key part of the changes.

Kaial and Joe Hajik presented the LifeBoKx to Spivey and his team. When CNN asked about the prototype, Spivey praised the motivation behind the project, especially from a 13-year-old.

"Our main sentiment is that we just thought it was really exceptional -- that a young man saw a need or problem in his community and tried to take initiative and stand up and do something proactive about it," Spivey said.

The LifeBoKx could not stand as a replacement to lifeguards and trained emergency responders -- there was no "magic bullet" for that -- but Spivey says it offers some useful tools, particularly the educational materials, and the potential to help expedite emergency response.

"Prevention and education are really about 95% of what we do as beach safety and lifeguards," Spivey said. "Thought it a good opportunity to work with Kaial and his idea."

For Kaial and Joe Hajik, the idea centers on providing the resources to save lives, both for those needing rescue and rescuers.

"If you save one life by doing that, whether it be yours or somebody else... that system is paid for," Joe Hajik said.

After presenting their idea to the local Optimist Club of the Beaches, a national organization dedicated to youth empowerment, Kaial and Joe Hajik plan to present the LifeBoKx to other groups and ultimately to the city council.