A 12-year-old boy was among several killed in Nevada shootings, police say 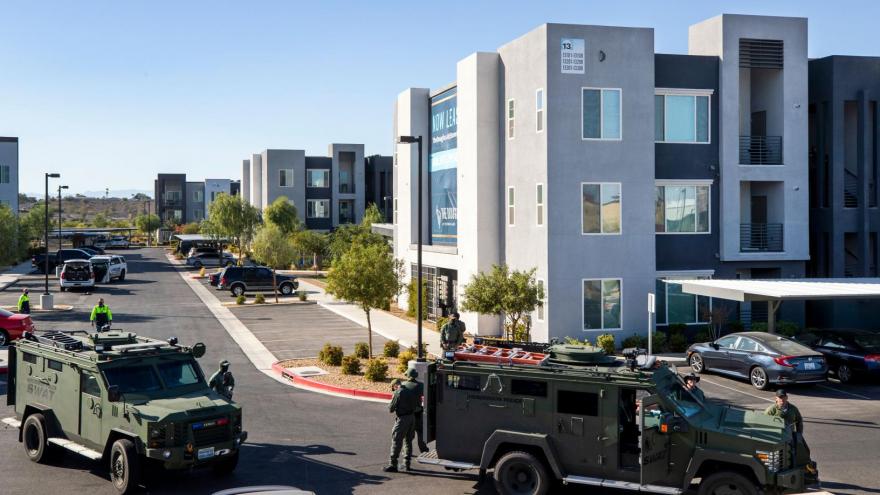 A 12-year-old boy was among several killed in Nevada shootings, police say.

(CNN) -- The victims in a triple homicide at a Nevada apartment complex Tuesday included a 12-year-old boy that a gunman was holding hostage in a car, as well as two women, police say.

The suspect, Jason Neo Bourne, 38, also died in an encounter in which officers fired their weapons as Bourne held a gun to the boy's head in Henderson, just southeast of Las Vegas, police said Wednesday.

Bourne fired multiple rounds in the vehicle, Henderson police said, but numerous details have yet to be publicly released, including precisely how Bourne and the child died.

A 16-year-old girl also was shot at the complex, and she was being treated at a hospital, police said.

Police have said they believe Bourne lived in a unit at the complex, above where the victims were staying. A Catholic educational center in Utah, however, has said three of the victims had ties there, some 400 miles to the northeast.

How police say the shootings unfolded

Someone at the apartment complex called police around 11 a.m. Tuesday to report hearing gunshots and seeing someone down in an apartment doorway, Henderson police said.

Officers arrived and saw two women, ages 39 and 33, dead, and a 16-year-old girl injured, all with gunshot wounds, police said.

Officers then saw Bourne and the 12-year-old boy in a nearby car, with Bourne armed with a handgun and holding the boy hostage, police said.

"As officers attempted a de-escalation dialogue with the suspect, the suspect held his firearm to the juvenile's head, resulting in an officer-involved shooting," Henderson police said in a news release.

Police have said Bourne and the boy suffered injuries -- but they haven't said how, or who injured them. Investigators believe Bourne "fired multiple rounds inside the vehicle," police said in the news release.

Officers took the boy out of the vehicle and began life-saving measures, but he and Bourne died at the scene, police said.

Police have not released the victims' names, or what the believe led to the shootings.

The girl was taken to a hospital in stable condition, police said. No officers were injured, the Henderson department said.

Though police haven't named the victims, a Catholic education center in Utah said one of the women was a substitute teacher there, and she was the mother of the two children.

That slain woman was Diana Hawatmeh, the Skaggs Catholic Center in Draper, Utah, said in a letter to the center's community Wednesday.

At least one of the children -- the boy, Joseph -- was a middle school student at the campus, according to the center, which also includes a high school and an elementary school some 20 miles south of Salt Lake City.

"It is with a heavy heart that we inform you of the passing of Diana Hawatmeh, and her son Joseph, a seventh-grader at Saint John the Baptist Middle School," the letter reads. "... They tragically passed in Henderson, Nevada, yesterday morning."

"(Her) daughter, Yasmeen, is in critical condition at a Las Vegas hospital," the letter reads.

Diana Hawatmeh was a substitute teacher at the center's elementary and middle schools, according to the letter.