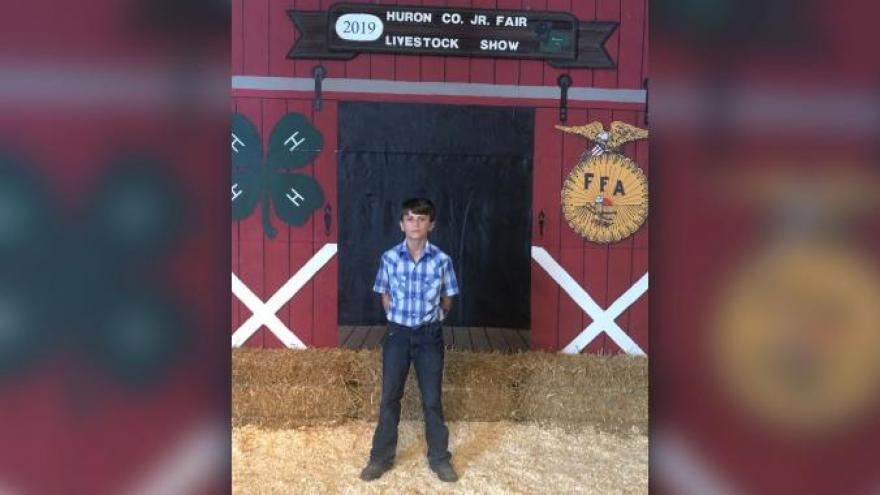 Diesel Pippert, a 12-year-old from Huron County, Ohio, auctioned off a pig for $15,000 at a county fair on Saturday. He'll donate his winnings to St. Jude Children's Research Hospital.

Diesel Pippert, a seventh grader from Huron County, Ohio, will donate every penny of his auction proceeds to St. Jude Children's Research Hospital.

Diesel's generous decision stemmed from a bit of friendly competition. He'd heard about a teen in nearby Medina County who auctioned off his hog for $11,000 and donated the proceeds to the nonprofit children's hospital in Memphis. So he set out to one-up him, his mother Erin Sanders told CNN.

He told Saturday's crowd at the Huron County Fair large animal sale about his plans. Auctioneers started the bidding for Diesel's hog at $500, and quickly grew from there. By the time the final bidder lowered their paddle, the boy had raised $15,000, Sanders said.

Diesel's a regular at the fair, his mother said.

He's auctioned off pigs, cows and dairy steer since age 9. Now, she hopes he'll keep up his giving streak and donate his earnings to St. Jude every year.

"Our hearts are full of joy," she said. "He's a remarkable young man."

The family's planning a visit to the Memphis hospital, Sanders said, where they'll hand-deliver toys and games to the pediatric patients.

Western Reserve Schools superintendent Rodge Wilson said he wasn't surpised when he heard about Diesel's good deed. In a Facebook post, the school district called the 12-year-old a "hero."

"We're very proud of what an upstanding young man he is," he said.

"His kindness demonstrates that age does not limit kids from fundraising and making a difference in the lives of other children battling cancer at St. Jude," she said in a statement to CNN.