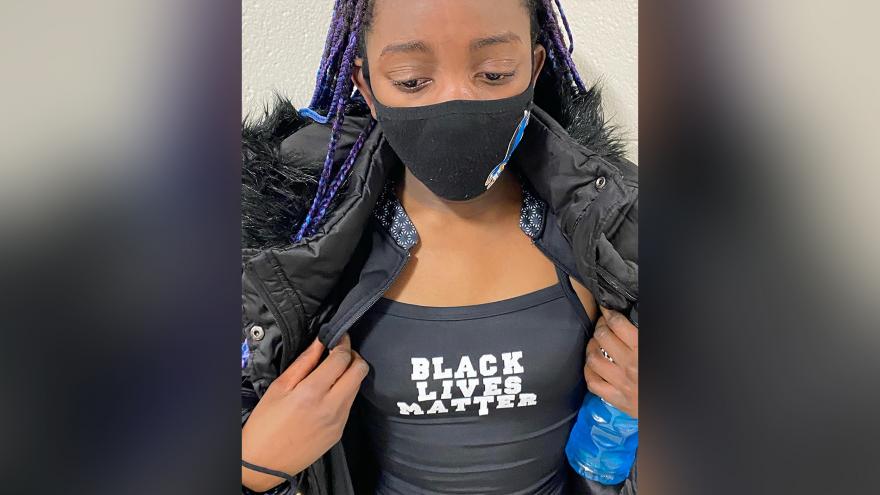 (CNN) -- A 12-year-old Black swimmer was nearly disqualified from a meet in Superior, Wisconsin, for wearing a Black Lives Matter swimsuit.

"An independent volunteer official inappropriately barred a student athlete from taking part in the meet, due to their 'Black Lives Matter' swimsuit, stating that it 'went against USA Swimming's policy of no political language,'" according to the Duluth Area Family YMCA, which sponsored the event Sunday at Superior High School.

Sarah Lyons said her daughter Leidy wore the swimsuit because the Black Lives Matter movement is important to her.

"She is very passionate about social justice. She has been through a lot already at a young age. It's a big part of her, which I think is wild at 12," Lyons told CNN affiliate KBJR.

Black Lives Matter started with a hashtag in 2012 after the shooting death of Trayvon Martin in Florida and has grown into a social juggernaut.

The protest movement was reignited in the days after George Floyd was killed by police in Minneapolis in May 2020 and aims to shine a light on what it calls systemic racism and police brutality from America's small towns to its urban centers.

Leidy told her mother she didn't want to change into a different swimsuit to participate in the meet, KBJR reported. "And I said, 'You go girl' and 'okay,'" Lyons told the station.

"The Duluth YMCA is saddened that the student, their family, and teammates had to endure this unacceptable behavior. The Duluth YMCA will continue our ongoing commitment to train all staff and volunteers on diversity, equity, and inclusion," the organization said in a statement.

CNN has reached out to USA Swimming, which is the national governing body for competitive swimming in the United States.

Leidy's mother also reached out to the Duluth NAACP to help with the dispute, according to KBJR.

"We need to protect our young Black girls and stand up against racism without being performative," a statement from the Duluth NAACP chapter said.

The YMCA said it prioritizes diversity and inclusion.

"The Duluth Area Family YMCA is committed to being an anti-racist organization and stands with BIPOC communities throughout the Northland and throughout our country. We know that Black Lives Matter and we will continue to work to educate ourselves, to stand against inequality, and to strive to be active allies in the ongoing fight for diversity, equity, and inclusion," the organization said.

Superior, Wisconsin is about 4.5 miles south of Duluth, Minnesota.