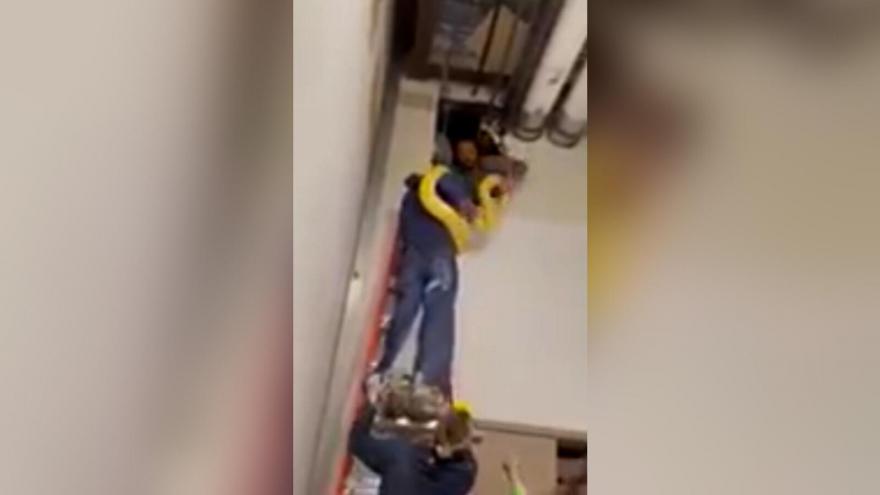 Cara is carried out of a hole in a wall, in video posted by the aquarium Thursday morning.

(CNN) -- Breathe easy, python fans: The search for Cara, a 12-foot serpent on the loose from her Louisiana mall aquarium exhibit, has ended happily.

Cara, a yellow Burmese python, was found "safe and healthy" after a search that had closed the Blue Zoo aquarium at the Mall of Louisiana in Baton Rouge for several days, the aquarium said Thursday morning.

Cara was where searchers thought she was -- somewhere in a wall or ceiling space -- a video posted to the facility's Facebook page appears to show.

The footage shows a worker carrying Cara out of a large hole cut high into a wall, stepping down a ladder with the help of others. The post doesn't say where precisely this wall is or exactly where Cara had been hiding.

"We couldn't be more excited to share with you that the search is over!" the post reads.

Aquarium workers believe Cara escaped from her exhibit Monday night through brute force, bending through a corner of her tank.

The entire mall -- home to more than 140 stores -- closed briefly Tuesday morning when Cara was discovered missing. All tenants except for the aquarium soon reopened after Blue Zoo staff persuaded others that Cara was likely hidden somewhere in the store.

Burmese pythons are nonvenomous snakes that kill prey like mammals, birds and reptiles by constricting them, but they present a low risk of attacking humans.

Snake trackers and experts were brought in to help search for Cara after Baton Rouge police and firefighters failed to find her over several hours Tuesday, Blue Zoo said.

Blue Zoo, which features Cara in aquarium shows for children, opened its mall location in April.