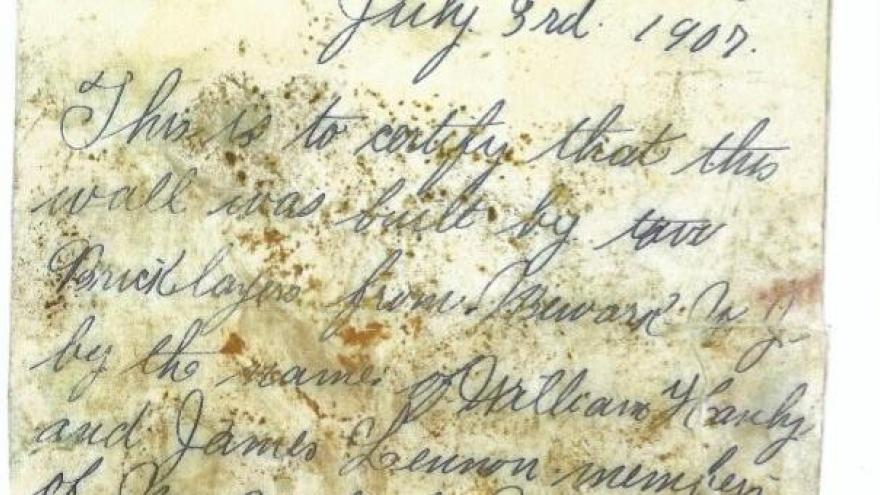 A closer view of the letter found during renovations.

(CNN) -- Renovations at Montclair State University in New Jersey uncovered a 112-year-old letter from the workers who built one of the original buildings on campus, the university said.

Robert Kanaby, a demolition worker, found the letter inside a beer bottle while taking down a wall in the College Hall building in February.

"It's a very old brick wall, about 14 feet with three layers of brick," Kanaby said. "So I was going brick by brick with a tool."

He heard glass break and knew something was wrong, he said. When he cleared the debris, he found the bottle with a letter inside.

"This is to certify that this wall was built by two bricklayers from Newark, N.J., by the names of William Hanly and James Lennon, members of No. 3 of the B.M.I.U. of America," read the letter, which was dated July 3, 1907.

"These guys were working on this before, just working around July 4 and drinking beers, and they decided to write this note for us to find," said Kanaby.

He immediately brought it to Sharon Mahoney, the university's director of construction management, who was astonished by the discovery.

"Amazing to think, if he started chipping a few feet in either direction, the bottle may have been inside a wall section which was taken down in one piece and may never have been found," Mahoney said.

University officials have spent the last several months learning more about the men who left the note. In records from the 1920 census, they found a William J. Hanly, 33, who lived on Central Avenue in Newark. They also found a bricklayer named James Lennon, born around 1875, who also lived in Newark, from 1930 census data.

The university also has been trying to find family members related to the men who wrote the note, but haven't had much luck. The university is planning to exhibit the letter and the bottle, as well as other artifacts found at the construction project, said Mike Zanko, the university's associate vice president for capital planning and project management.

"These two men laid the original bricks of Montclair State University, and are a part of its history and its transformation from a New Jersey Teachers College to a research doctoral institution, a public research university, and the second-largest institution in the state," said a spokesperson for the university. "They are forever a part of our community, and we hope their message -- and ours -- will find their descendants so that we may properly welcome them into the Red Hawk family."