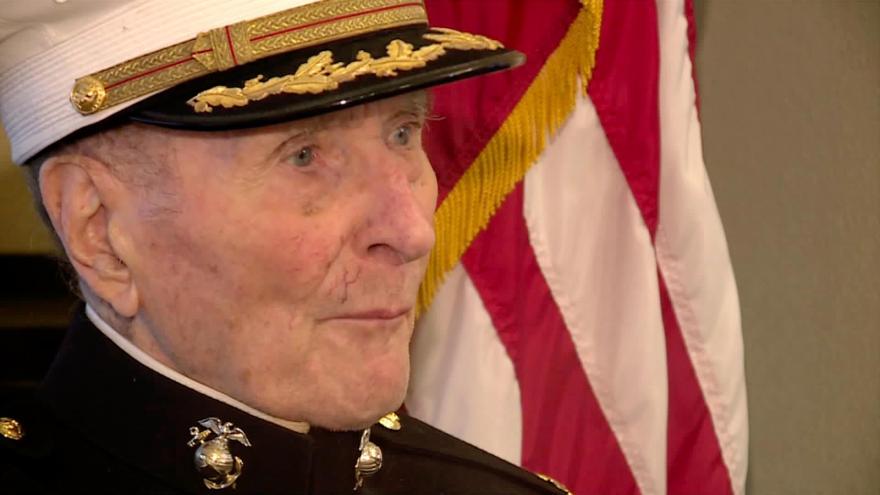 (CNN) -- A 104-year-old US Marine Corps veteran who served in World War II is asking people to send him cards for Valentine's Day.

Maj. Bill White, a California native, has had a lifetime full of unforgettable experiences. He has collected objects and filled scrapbooks to remind him of special memories which he keeps on a bookshelf organized by year.

But now, the young-spirited veteran wants to expand his collection of memories, and he's asking the public to help by sending him a card this Valentine's Day.

"I'll save every one of them like I've been saving little things that have come up until right now and they'll be a personal part of my history," White told CNN affiliate KTXL.

And that history of his is more than eventful.

White earned a Purple Heart for surviving the Battle of Iwo Jima in 1945. The bloody battle between the US Marines and Imperial Army of Japan lasted five weeks, killing nearly 7,000 US Marines and more than 20,000 Japanese fighters.

"When I was wounded, I didn't have any choice in the matter. A grenade blow up about 6 inches from me," White told KTXL.

"The fact that I even survived is something. There weren't too many of us."

The veteran, who spent 30 years on active duty, was taken off the battlefield as a result of his injuries.

White told KTXL his love for scrapbooking keeps him busy, allowing him to "keep track" of his life's special events.

But the real key to his long and positive life, he said, was simple: "Just keep breathing."

If you'd like to send White a Valentine's Day card, you can mail it to:

The Oaks at Inglewood