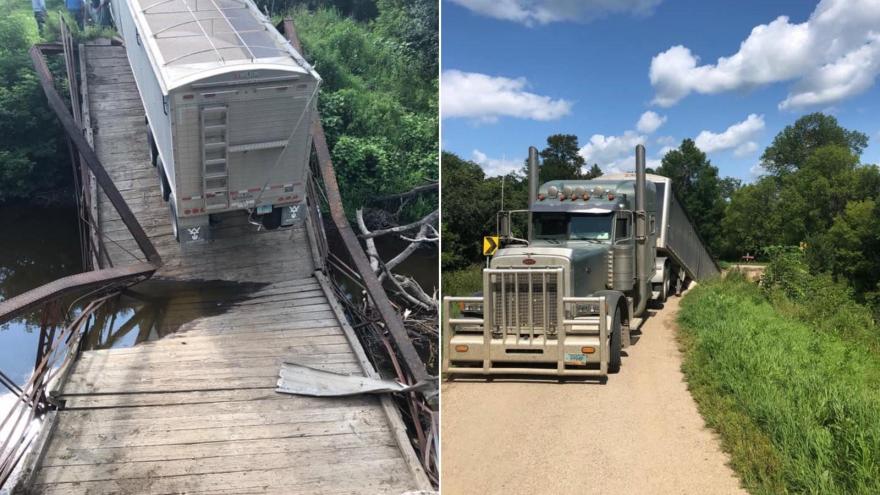 (CNN) -- A historic bridge in North Dakota collapsed under the weight of 42 tons of dry beans.

A tractor-trailer carrying more than 84,560 pounds of beans brought down a steel bridge near Northwood on Monday afternoon, according to the Grand Forks County Sheriff's Office.

The truck and driver made it to the other side of the 56-foot structure, but the bridge fell under the trailer, which hung off the gravel road toward the Goose River below.

Officials said that driver Michael Dodds of Minnesota wasn't harmed in the incident. They fined him $11,400 for exceeding the weight limit of the bridge, which could safely support only 14 tons.

The historic bridge was built in 1906 and added to the National Register of Historic Places in 1997. A rebuild could cost between $800,000 and $1 million, according to the sheriff's office.

Shane Olson, who owns the truck, told the Minneapolis Star-Tribune that Dodds was unfamiliar with the area and entered his destination into GPS, which led him across the old bridge.

He said he had forgiven Dodds and would not fire him.

Court records show that Dodds was twice convicted of exceeding load limits in 2017 in two Minnesota counties, the Star-Tribune reported.

Bridges in the US aren't getting fixed as often

Nearly 40% of American bridges are in need of repair as they age, but fewer are getting fixed every year, according to an April report from the American Road & Transportation Builders Association.

North Dakota has some of the country's most structurally deficient bridges, with nearly 11% in need of repair.

Although they don't pose an immediate threat to safety, older bridges will become only more dilapidated as the rate of repairs slows, the association said. Notable structures like the Brooklyn Bridge and the San Mateo-Hayward Bridge over San Francisco Bay were deemed deficient.

It will take an estimated 80 years to fix them all, according to the report.