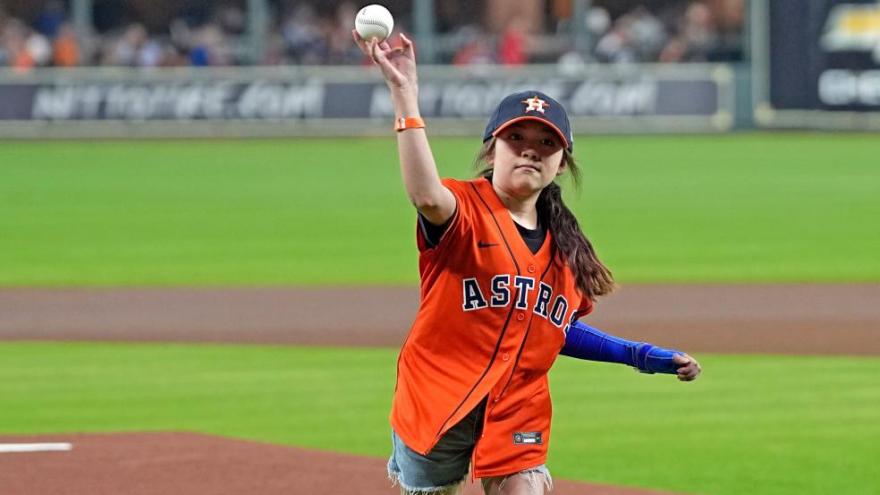 10-year-old Uvalde survivor, Mayah Zamora, who spent 66 days in a hospital and lived near the shooter is getting a new home.

(CNN) -- Sometime during her 66-day hospital stay, Uvalde school shooting survivor Mayah Zamora learned she had lived just blocks from the gunman -- and she found it too hard to return home when she was released, a non-profit organization says.

So donors are building a new house for the Texas 10-year-old and her family, spurred in part by the organization founded by baseball pro Carlos Correa.

The plan was announced Tuesday at a Houston Astros game at Minute Maid Park, where Mayah threw the ceremonial first pitch at the invitation of the Correa Family Foundation, started by the former Astros shortstop.

Mayah, wearing an Astros jersey and cap, tossed to home plate as the crowd cheered. Correa, playing in Houston for the first time since he signed in the offseason with the day's visitors, the Minnesota Twins, said he wanted to make Tuesday special for Mayah.

Mayah's path home has been daunting and heartbreaking.

She was severely wounded in the May 24 massacre at Robb Elementary School in Uvalde, Texas, in which a gunman killed 19 of her schoolmates and two teachers.

With gunshot wounds to her hands, arms, chest and back, she underwent more than 20 surgeries during a hospital stay of more than two months.

She was the last victim left hospitalized when she was released from San Antonio's University Health hospital on July 29. She handed roses to nurses and other staff as she left, with people in the hall clapping and chanting, "Mayah! Mayah!" video tweeted by the hospital shows.

But she didn't end up back at her childhood home, Correa's foundation says.

"During her hospital stay ... Mayah discovered that the shooting suspect lived just blocks away from her home," the Correa Family Foundation said in a statement obtained by CNN affiliate KTRK.

"Since she was discharged from the hospital, that knowledge has been too much to bear, and she has been unable to return to her childhood home."

After hearing this, the foundation, along with Puerto Rican pop superstar Bad Bunny and the co-founders of TokenSociety.io, gave Mayah's family a grant for alternative lodging, the statement reads.

On Tuesday, the foundation announced "that thanks to the generosity of numerous donors, CFF has secured the funding to build Mayah and her family a new home in a location where she feels comfortable," the statement reads.

The home will be fully furnished, the foundation said.

The foundation says it was started to help children with cancer, though it also supports families impacted by other serious hardships, such as tragedies and natural disasters.

Each month, the foundation brings a child it supports to a baseball game. Mayah's appearance at Minute Maid Park was part of the foundation honoring her as its "hero of the month," according to the organization.

When Correa heard about the Uvalde massacre, he texted the foundation's president, he told MLB.com.