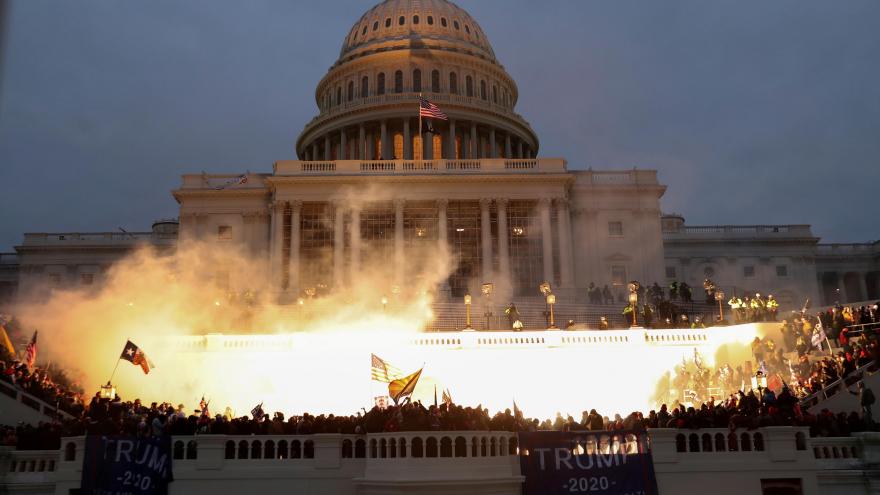 (CNN) -- The US Capitol Police confirmed the death of one of their officers late Thursday from injuries suffered when a mob of President Donald Trump's supporters stormed the Capitol a day before.

Capitol Police said in a statement that Officer Brian D. Sicknick died at approximately 9:30 p.m. ET Thursday "due to injuries sustained while on-duty."

The death is being investigated by the DC Metropolitan Police Department's homicide branch, the US Capitol Police and their federal partners.

"Officer Sicknick was responding to the riots on Wednesday, January 6, 2021, at the U.S. Capitol and was injured while physically engaging with protesters. He returned to his division office and collapsed. He was taken to a local hospital where he succumbed to his injuries," the statement read.

Sicknick had joined the Capitol Police in July 2008, and most recently served in the department's First Responders Unit.

(CNN) -- A Capitol Police officer is on life support Thursday night after a mob of President Donald Trump's supporters stormed the US Capitol a day before, according to Capitol Police union chair Gus Papathanasiou.

Papathanasiou told WUSA -- a local Washington, DC, television news station -- that the officer died. Later Thursday, the Capitol Police released a statement stating no officers had died as a result of Wednesday's riot.

Papathanasiou retracted his statement to WUSA and told CNN the officer was still on life support.

One woman was shot and killed by Capitol Police as the crowd breached the building and three others suffered medical emergencies that proved fatal.

Shortly after 1 p.m. ET Wednesday hundreds of pro-Trump protesters pushed through barriers set up along the perimeter of the Capitol, where they tussled with officers in full riot gear, some calling the officers "traitors" for doing their jobs.

About 90 minutes later, police said demonstrators got into the building and the doors to the House and Senate were being locked. Shortly after, the House floor was evacuated by police. Vice President Mike Pence was also evacuated from the chamber, where he was to perform his role in the counting of electoral votes.

An armed standoff took place at the House front door at about 3 p.m. ET, and police officers had their guns drawn at someone who was trying to breach it.

As a result of the episode, US Capitol Police Chief Steven Sund is resigning. He said in a statement earlier Thursday that Capitol Police and other law enforcement officers were "actively attacked" with metal pipes and other weapons.

Still, lawmakers say they are perplexed at the lack of preparedness among law enforcement given that it had been known for weeks that Trump was promoting a rally he said was aimed at preventing the certification of Biden's win.

Rep. Mike Quigley, an Illinois Democrat who was locked in the House chamber during an armed standoff between Capitol Police and a rioter, praised the officers who were in the building that put their lives on the line, but made clear that they were outnumbered and law enforcement was under prepared.

"The Capitol Police I was around did an amazing job under difficult circumstances," Quigley told CNN. "My concern wasn't with how valiant the Capitol Police were. It was that an hour before the debate started, I looked at the throngs of people surrounding different sections of the Capitol and said, we don't have enough security."

Quigley added: "I'm no expert in security, but you can tell we were out-manned in an hour before the debate," referring to Congress' proceedings to certify Biden's win.

CORRECTION: This story and its headline have been corrected to reflect that the officer is on life support. This story is breaking and will be updated.