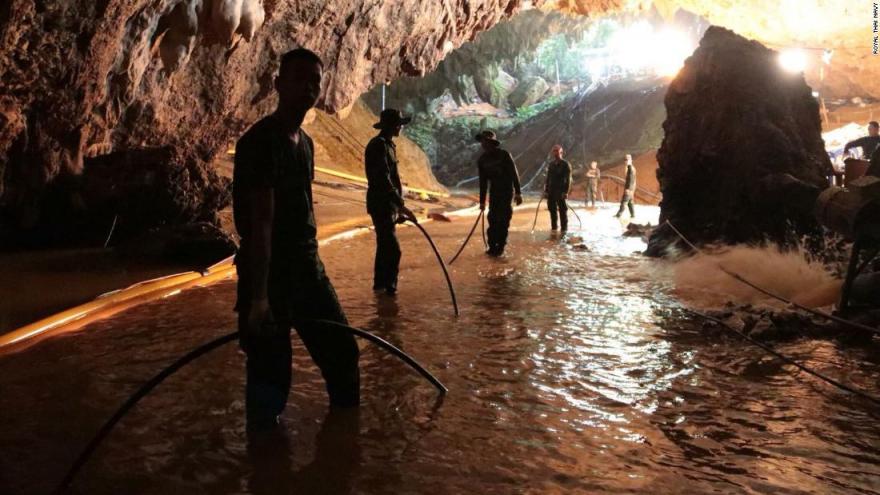 (CBSNews) -- U.S. President Donald Trump on Tuesday congratulated rescuers who saved a Thai soccer team that had been trapped in a cave amid rising floodwaters.

"On behalf of the United States, congratulations to the Thai Navy SEALs and all on the successful rescue of the 12 boys and their coach from the treacherous cave in Thailand," Mr. Trump tweeted.

"Such a beautiful moment - all freed, great job!"

The parents of some of the soccer players rescued from a cave in Thailand have been able to visit their children in the hospital, Thai media reported Tuesday.

Four of the kids were allowed to have their parents enter their rooms, though they were required to wear face masks and stand 6 feet away from the boys, Thai media said. The parents of the other boys were able to see their children through a glass window. All the boys were quarantined because of the risk of infection.

Thai public health officials said that the first four boys who were rescued were able to stand up and walk around their beds on Tuesday. At least two of them may have lung infections, but none has a fever, officials said.

(CBSNews) -- The last young members of the Wild Boars soccer team are believed to be out of the sprawling cave complex in northern Thailand where they were trapped for more than a week.

Officials confirmed to CBS News that all 12 players and their assistant coach were safe on Tuesday.

The 12th member of the team was brought out of the cave complex on a stretcher only about eight hours after officials announced Tuesday's 3rd phase of the rescue operation. The 25-year-old assistant coach was the last out.

The conditions of the boys pulled out of the cave on Tuesday, and their coach, remains unclear, but officials have said the eight previously rescued are in relatively good health at a hospital in Chiang Rai.

Only a doctor and three Thai Navy SEALS who helped with the rescue effort will still need to get out safely before the operation is wrapped up.

MAE SAI, Thailand (AP) -- The Latest on the rescue of a youth soccer team from a flooded cave in Thailand (all times local)

Three ambulances, their lights flashing, have been seen leaving the site of the flooded Thai cave where rescuers are involved in an all-out effort to rescue members of a youth soccer team and their coach trapped deep within.

Earlier Tuesday, Thai navy SEALS said a ninth boy had been brought out of the cave on the third day of the rescue effort. The departure of the three ambulances suggests others also have been rescued, but there was no immediate official confirmation.

Rescuers hope to complete their mission Tuesday after rescuing four boys on each of the previous two days. That left four boys and their 25-year-old coach still in the cave.

The 12 boys and their coach were trapped by flooding in the cave more than two weeks ago.

MAE SAI, Thailand (AP) — A ninth boy was rescued from a flooded cave in northern Thailand on Tuesday as divers were carrying out what they hope is a final mission to save the youngsters and their soccer coach trapped for more than two weeks.

Thailand's Navy SEALs said on their Facebook page that "the 9th Wild Boar was out of the cave at 4:06 p.m.," referring to the name of the soccer team they are all members of.

Eight of the 12 trapped boys were brought out of the cave by divers in the past two days. The third day of the intricate and high-risk mission aims to rescue the remaining boys and their coach and also bring out a medic and three Thai Navy SEALs who have stayed with the teenagers in their dark refuge deep within the sprawling cave.

"We expect that if there is no unusual condition ... the four boys, one coach, the doctor, and three SEALs who have been with the boys since the first day will come out today," he told a news conference to loud cheering.

Nargonsak said this phase may take longer than the previous two rescue missions. The first and longest mission took 11 hours.

The eight boys brought out by divers over the previous two days are in "high spirits" and have strong immune systems because they are soccer players, a senior health official said.

Doctors were being cautious because of the infection risk and were isolating the boys in the hospital. They did get a treat, however: bread with chocolate spread that they'd requested.

The plight of the boys and their coach has riveted Thailand and much of the world - from the heart-sinking news they were missing to the first flickering video of the huddle of anxious yet smiling boys when they were found 10 days later by a pair of British divers. They were trapped in the Tham Luan Nang Non cave that became flooded by monsoon rains while they were exploring it after a soccer practice on June 23.

At a news conference, Jedsada Chokdumrongsuk, permanent secretary at the Public Health Ministry, said the first four boys rescued, aged 12 to 16, are now able to eat normal food, though they can't yet take the spicy dishes favored by many Thais.

Two of the boys possibly have a lung infection but all eight are generally "healthy and smiling," he said.

"The kids are footballers so they have high immune systems," Jedsada said. "Everyone is in high spirits and are happy to get out. But we will have a psychiatrist to evaluate them."

It could be at least seven days before they can be released from hospital, Jedsada told a news conference.

Family members have seen at least some of the boys from behind a glass isolation barrier, and Jedsada said doctors may let the boys walk around their beds Tuesday.

It was clear doctors were taking a cautious approach. Jedsada said they were uncertain what type of infections the boys could face "because we have never experienced this kind of issue from a deep cave."

If medical tests show no dangers, after another two days parents will be able to enter the isolation area dressed in sterilized clothing and staying 2 meters away from the boys, said Tosthep Bunthong, Chiang Rai Public Health Chief.

The second group of four rescued on Monday are aged 12 to 14.

At least nine ambulances and a convoy of other vehicles were at the cave site Tuesday.

Heavy rains in the morning cleared during the day, a reassuring sign for rescuers who have feared monsoon rains could imperil the rescue.

Narongsak said he was grateful for Musk's support but the equipment was impractical for the rescue mission.

Musk on Tuesday visited the cave and posted pictures and videos online. He said he left the equipment there in case rescuers could use it in the future.