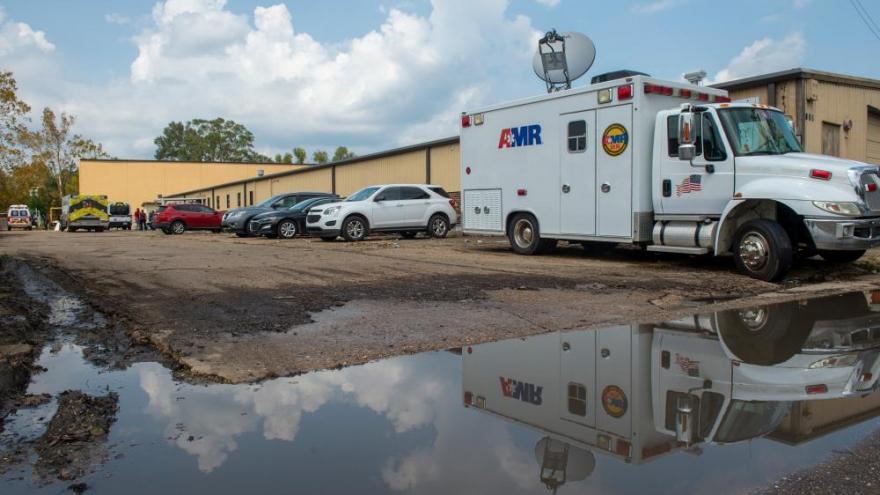 Emergency responders evacuate people on September 2 from a facility in Independence, Louisiana.

(CNN) -- The 911 calls made from a Louisiana warehouse where more than 800 nursing home residents were sent to shelter during Hurricane Ida depict a chaotic scene, according to logs of the calls obtained by CNN.

At least 30 calls were made requesting emergency assistance to the facility in Independence for medical episodes that included heart attacks, seizures, unresponsive patients and stopped breathing.

Many of the 63 call logs detail medical emergencies, including one instance in which a caller says a diabetic patient needed emergency transport because they had "not eaten due to them having no more supplies."

One dispatcher writes early on August 28 that a resident called 911 saying she thought she had been "kidnapped."

"She is a senior citizen that was in a nursing home evacuated here due to the hurricane," the log continues.

CNN spoke with Debbie Strickland, the 66-year-old woman who made that call.

"It was horrible," Strickland said.

The staff refused to let her use her wheelchair, she said.

"(They) wouldn't help me get out of the bed or nothing," Strickland said.

CNN reached out to the seven nursing facilities for comment but did not immediately receive a response.

A review of business licenses by CNN has found that Bob Dean Jr. of Baton Rouge is listed as an executive with all seven nursing facilities, in addition to the warehouse.

When questioned about the warehouse by CNN affiliate WVUE, Dean said that, "we only had five deaths within the six days and normally with 850 people, you'll have a couple a day, so we did really good with taking care of people."

The calls began Friday, August 27, the date that the Louisiana Department of Health says the residents were evacuated to the warehouse.

"(Caller) reporting a patient is having trouble breathing," reads one log of a call received at 4:54 p.m.

At 1:06 p.m. on August 28, an operator writes in a log about someone reporting a patient "gasping and having trouble breathing."

Three hours later, two other calls were reported: One caller reports a "person that is having seizures" and another says a person's breathing had stopped.

"Caller adv that patient in the shelter is fighting everyone and they need him removed," one log from a 7:56 p.m. call says.

The logs also show that some of the residents called 911 themselves.

"Caller adv that he is at the warehouse and he is a stroke patient and he is laying on the floor and he is being treated poorly," one entry from August 29 at 11:57 a.m. reads.

"I am at the place where we came for Ida I am disabled with the nursing home and supervisor threatened to call her son to jump on me I need the police I am trying to (be) patient," another log from August 31, 2:01 p.m. reads.

In one entry, a 911 caller reports an individual being struck in the head by falling board.

The state's health department moved everyone out of the building by the evening of Thursday, September 2.

The seven facilities that lost their licenses also had their Medicaid provider agreements terminated, the state Department of Health said.

"Let's be clear; there is no emergency-preparedness plan that allows for residents to be kept in such an unsafe, unsanitary, and unhealthy condition," said Stephen Russo, director of legal, audit and regulatory affairs for the health department. "The lack of adequate care for these residents is inhumane, and goes against the rules, regulations, and applicable statutes."

Changes must be made, state leader says

"To pack that many people into one warehouse is just unthinkable. And how can this happen after we've gone through Katrina, and had those deaths in the nursing homes then, and set things in place so this would never happen again?" Nungesser told CNN. "It's just unthinkable. It's embarrassing."

In addition to the warehouse deaths, the New Orleans Health Department said Monday it found five people dead during its post-Ida checks at multiple senior apartment complexes in the city. Ten of the complexes were deemed unfit for occupancy and evacuated, the department said.

Nungesser, a Republican who has been in office since January 2016, said "there's going to be some changes here in Louisiana to where this could never happen again."

He said he wants more checks and balances of officials who approve plans and how those plans get approved. He said local elected officials and people in the industry should have a say in those plans.

Five of the seven deaths have been classified as storm-related, the state's health department said in a recent news release.

Three of the nursing homes are in Jefferson Parish, two are in Orleans Parish, one is in Lafourche Parish and the other is in Terrebonne Parish.

The coroner's office in New Orleans is investigating after five residents of senior apartment complexes were found dead during post-storm wellness checks, according to a news release from the New Orleans Health Department.

Ten of the facilities visited during checks Friday and Saturday were deemed unfit for ongoing occupancy and evacuated, officials said.

Dr. Jennifer Avegno, director of the New Orleans Health Department, said at a news conference Monday that immediately after the storm, the department began its typical outreach to leadership at facilities that it knew housed many elderly, vulnerable and disabled residents to assess their immediate needs.

Health officials and emergency responders went door to door to check on every resident, Avegno said.

"In some of these facilities, we found fairly stark conditions, no power, no elevators, no lights, individuals in their rooms who couldn't access normal supports or services," she said. "Tragically in some places, our staff discovered residents who had died and had not yet been discovered."

Officials determined there were "emergent threats to life and safety for the people who were remaining there," and "quickly mobilized, getting those individuals to state shelters, as soon as possible," Avegno said.

Close to 600 residents of these buildings were safely evacuated to state shelters, where they are now "secure and comfortable," Avegno said.

New Orleans Mayor LaToya Cantrell said at the same news conference Monday that "what we found was unacceptable, and accountability will be across the board. But right now, we will remain focused on improving the conditions of the facilities that we closed in order to bring our citizens back, we do not want to bring them back in those conditions that they left."

Christopher Homes Inc., which describes itself as "a senior living ministry of the Archdiocese of New Orleans," owns several of the facilities that were closed by the health department and housed three of the residents who were found deceased.

The Archdiocese of New Orleans provided a statement on behalf of Christopher Homes Inc. that said, "Residents are independent living tenants with leases, and before storm season, all residents were required to provide a personal evacuation plan to property management, which verifies the plan."

"Without a mandatory evacuation order, Christopher Homes could not close the buildings for Hurricane Ida. All residents were encouraged to evacuate. Two hundred eighty-six residents in Orleans Parish chose to stay in their apartments or did not have the means to evacuate without the resources usually provided by the City of New Orleans in a mandatory evacuation," the statement said.

"In the days following Sunday's landfall, Christopher Homes leadership repeatedly requested assistance and resources from civil authorities," the statement said. "After the death of one of our residents was reported five days later, on Friday, September 3, civil authorities finally responded and provided resources to evacuate those residents who had not voluntarily evacuated."

Cantrell was asked about the Archdiocese's accusations at Monday's news conference and said, "I don't play the blame game ... If there is an issue that this is a city matter, I own it every step of the way, including all of the people who stand with me to deliver services. This is not one of them."

"I think accountability needs to be where it is. And that's all on these institutions."