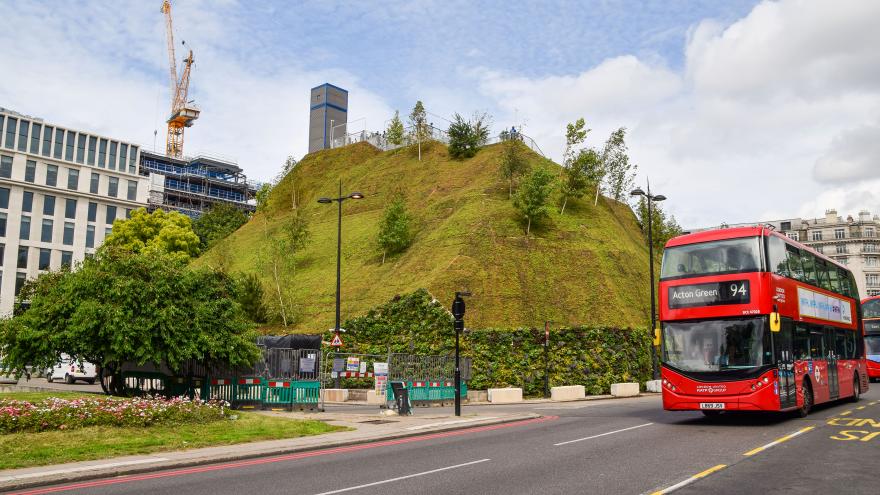 The much-derided Marble Arch Mound, which cost a reported £6 million ($8.15 million), and was overseen by Westminster Council, will close January 9 after developing a reputation as a major disappointment and having been the source of widespread mockery on social media since July.

Ahead of its impending closure, tickets to the attraction are being sold for free, and are available on the door as well as on the Mound's official website.

The Mound -- situated on the corner of Hyde Park and Oxford Street -- had promised sweeping greenery, unique views of the city and a light exhibition inside. It was conceived by Westminster Council as part of a "smarter, greener" future for the borough.

But when it opened, visitors were shocked to discover that elements of the attraction were clearly unfinished. Scaffolding used in the development of the structure was still visible and the lush greenery that had been promised was sorely lacking, as photos on social media showed.

The views at the top of the Mound -- 130 steps up -- were described as underwhelming and less than had been expected.

In a review written for The Critic when it first opened, Dan Barker said that the marketing material around the Mound had described entering into the inside of the structure as "descending into the heart" yet felt "a little soulless rather than a beating heart, an empty space used to store hand sanitizer and temporary signs."

Barker also said the café and the shop that was promised, along with a light exhibition by W1 Curates which has since appeared, had yet to emerge when he visited in its opening days.

In his review, Barker compared the Mound to "that famous Cristiano Ronaldo statue" -- in reference to the sculpture of the soccer star that failed to capture any of his features -- rather than "Michaelangelo's David" and concluded that the money spent on the attraction by the council "could have been better used."

When the news that the Mound would be shutting down reached Twitter, users were quick to use the opportunity to mock the attraction one last time.

Otto English -- the pen name that the writer and journalist Andrew Scott goes by -- bid farewell to the Mound and pointed out that it had cost taxpayers millions of pounds.

Author Edwin Hayward questioned whether any visitors ever actually came to London just because of the Mound and called it a "dire expenditure by the local council, despite their protestations."

And when the Mound first opened to visitors, one said it was "the worst thing I've ever done in London."

Despite its many detractors, there were some that still tried to defend the Mound before it closes for good. Tony Devenish, a Conservative Assembly Member for Hammersmith and Fulham and Kensington and Chelsea, said the Marble Arch Mound "drove footfall at a time when the West End was trying desperately to protect jobs and recover from the impact of Covid."

While its time in the English capital may have been short-lived, the Marble Arch Mound will always be remembered -- although not for the reasons its creators might have liked.