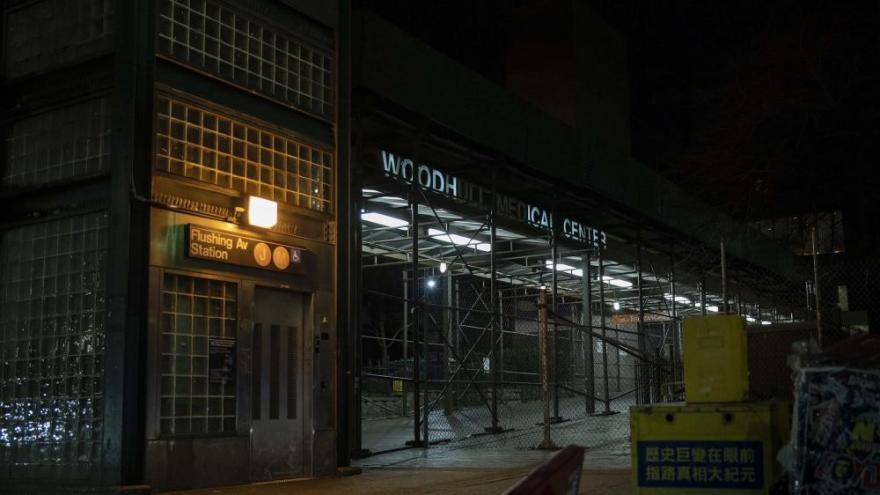 The Woodhull Medical and Mental Health Center in Brooklyn is where an 86-year-old woman with dementia died.

(CNN) -- An 86-year-old woman who broke coronavirus social distancing guidelines and grabbed onto another patient's IV pole in the emergency room was shoved, fell to the floor, hit her head and later died, according to a report from the New York City Police Department.

Janie Marshall, broke the recommended six-foot space between herself and patient Cassandra Lundy, 32, when she grabbed Lundy's IV pole to get her balance at the Woodhull Medical and Mental Health Center in Brooklyn on March 28.

A family member told CNN that Marshall had dementia.

Lundy was arrested and charged with manslaughter and assault on April 2, the NYPD said.

Lundy faces charges of manslaughter in the first and second degree, assault in the second degree, and criminally negligent homicide, according to the Brooklyn District Attorney's Office.

CNN has been unable to identify an attorney for Lundy.

In a statement to CNN, Woodhull Hospital said they are working with the NYPD on the investigation.

"We are terribly saddened by this death. We are committed to ensuring a safe, health-focused environment in these very demanding times so our heroic health care workers can continue to deliver the quality, compassionate care New Yorkers need more than ever," the hospital said in a statement.

Antoinette Leonard-Jean Charles, Marshall's grandniece, told CNN that Marshall had been admitted to the ER on March 27 after experiencing stomach pains related to a bowel obstruction. She said the hospital has not been communicative in providing details on how Marshall died. Instead, she has been relying on local news reports to get more information on the altercation.

The hospital had cited the health privacy law HIPAA as to why they could not give more information, even though her mother and Marshall's niece, Eleanor Leonard, was listed as her next of kin, Charles said.

The hospital told CNN it was unable to release further information.

Though Charles only knows as much as what's in the police report, she speculated that because Marshall had dementia, she may not have understood her surroundings, so she wandered around, eventually running into Lundy amid the chaos of the ER that day.

Marshall, born in 1934 and the youngest of 12 children, was "one of the sweetest, friendliest women you could ever meet," said Charles. According to her obituary, Marshall worked for the Social Security Administration and was one of the first African American women to receive a Commissioner Citation, the agency's highest award.

Marshall "never wanted to be anybody's victim," she added, which was perhaps the hardest part of learning of her death -- that the family wasn't there and Marshall was ultimately a victim of circumstances in being in the wrong place at the wrong time.

As the hospitals in New York City and across the country grapple with surging coronavirus-related hospitalizations, Charles stressed that violence in uncertain times will never change anything.

One fearful action could lead to serious, unintended consequences, she said.

"Violence is not going to change anything."