8 takeaways from the November Democratic debate 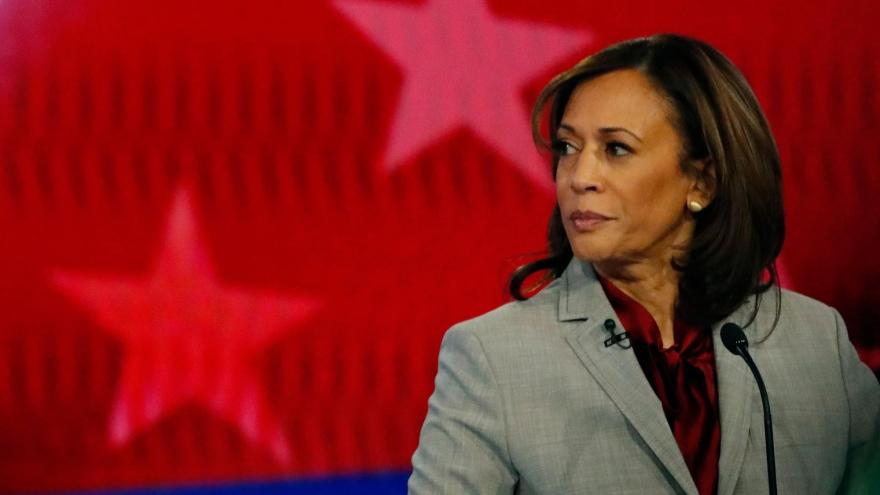 (CNN) -- Democratic voters are overwhelmingly focused on finding a candidate they believe can beat President Donald Trump. In Wednesday night's debate, the party's leading contenders offered their clearest arguments yet about how they plan to do that.

"The question black women voters have for us as candidates is: Where you been, and what are you gonna do?" Harris said.

Former Vice President Joe Biden also staked a claim to the Obama coalition, but stumbled into an awkward moment while doing so.

Meanwhile, Vermont Sen. Bernie Sanders used his closing statement to try to reach Latinos, a crucial part of the electorate in Nevada -- the third state to vote in the Democratic nominating process and key for Biden -- as well as California and Texas, which will award huge swaths of delegates on Super Tuesday.

"I am the son of an immigrant," he said. "I have some sense of an immigrant experience. I will stand with the 11 million undocumented immigrants in this country."

Minnesota Sen. Amy Klobuchar made her most forceful case yet that her history of winning in red and purple portions of the Midwest -- despite the reality that in politics, "women have to work harder" -- give her a strong claim to the centrist lane in the 2020 primary field.

And South Bend, Indiana, Mayor Pete Buttigieg, who has rocketed to the top of Iowa polls in recent weeks, fended off Klobuchar's characterization of him as merely a "local official" and questions about his virtually nonexistent support from African Americans.

Here are eight takeaways from the fifth Democratic presidential debate:

Buttigieg's rise to the top of the Iowa polls meant he entered Wednesday night with the biggest target on his back.

Those attacks primarily came later in the debate. Buttigieg largely emerged from the night unscathed -- a relief for his campaign, which knew his opponents were more eager than ever to knock him down.

The first contender to take direct aim at Buttigieg was Klobuchar, who questioned his experience and chided the small-city mayor as a "local official."

Buttigieg responded by quickly pivoting to an attack on Washington.

Hawaii Rep. Tulsi Gabbard also took a swing, saying Buttigieg lacked judgment when he suggested using the US military to help combat cartel violence along the border for security cooperation.

Buttigieg called her claim "outlandish, even by the standards of today's politics" and criticized her for meeting with Syrian President Bashar al-Assad.

And Harris implicitly knocked Buttigieg for his struggles with courting black voters. Buttigieg accepted her criticism -- "I completely agree," he said to the California senator -- and then acknowledged that the lack of African American support is a problem but said he will "welcome the challenge."

Then, there were more subtle jabs -- like when Booker noted that he is the "other Rhodes Scholar" in the race. But for all but the most engaged viewers, those moments might not have registered.

Klobuchar had a clear goal Wednesday night: Plant serious doubt in Democratic voters' minds that Biden is the most electable candidate and that Buttigieg is the voice of the Midwest.

She hit those marks more effectively than ever before.

Contrasting herself with Buttigieg, Klobuchar said that "women have to work harder, and that's a fact." Then, she transitioned into the hard work she's done: Winning even the red and purple congressional districts in her battleground state, and then playing a role in the passage of a long list of legislation in the Senate.

She also took a broad shot at progressive policy goals like "Medicare for All" and free college tuition.

"I'm not going to go for things just because they sound good on a bumper sticker and then throw in a free car," she said.

It's far from clear that Klobuchar changed her trajectory in any major way. Her campaign is built entirely on the prospect of a strong finish in Iowa, where polls show her moving into the mid-single digits but still far from the 15% threshold she'll need to hit at individual caucus sites to actually pick up delegates. And the core of her argument -- that many bold ideas with broad support among progressives are unserious -- might not motivate many voters.

But the Minnesota senator's play is for the center lane. And on Wednesday, she mounted her clearest case yet that her record and electoral history in Minnesota are assets Biden and Buttigieg don't have.

Biden walked himself into several awkward moments in the latter portion of Wednesday night's debate.

Another came when Biden -- attempting to reference former Illinois Sen. Carol Moseley Braun, who is a strong backer of his campaign -- claimed to have been endorsed by "the only African American woman who's ever been elected to the United States Senate."

Correcting himself, Biden said, "I said the first."

The former vice president also had strong moments. Much of the debate's second half focused on foreign policy, and at one point, in a moment that would mark a significant break from US policy, Biden pledged to end weapons sales to Saudi Arabia and treat the country like "the pariah that they are."

The exchange over black voters started when Booker chastised Biden over marijuana. The former vice president had said days earlier that he is opposed to legalizing marijuana on the federal level, saying he wants more research into whether it's a "gateway drug."

"I thought you might have been high when you said it," Booker said.

The New Jersey senator has long advocated for the federal government to legalize marijuana. So have all the other leading Democratic contenders -- except Biden.

To be clear, Biden's position on marijuana legalization is well to the left of existing federal policy. He argued that marijuana should be decriminalized, with all marijuana arrests expunged from the records of those convicted. He has also said marijuana should be removed from the list of Schedule I drugs so that researchers can study its effects.

But Booker was arguing that legalizing marijuana is a matter of racial justice, and that Democrats won't be able to rebuild the coalition of voters assembled by Barack Obama if black voters are alienated. He specifically pointed to a drop in black turnout in Wisconsin in the 2016 election.

Biden, touting his endorsements from black congressional leaders and his strong poll numbers with African-American voters nationwide and especially in South Carolina, said, "I'm talking to that Obama coalition. I come out of the black community, in terms of my support."

The question was about Democrats who chant "Lock him up!" at the mention of President Trump, and whether he approved, but Sanders had something else on his mind: climate change.

Later on, when the moderators did ask about climate change, Sanders took exception with their framing.

"Your questioner said, 'What are we going to do in decades?' We don't have decades," Sanders said. "What the scientists are telling us is, if we don't get our act together within the next eight or nine years, we're talking about cities all over the world, major cities, going under water."

He went on to tick off the potential catastrophes that lie ahead, in particular the potential for a climate refugee crisis that sets off a national security emergency. Sanders also took a page from his Green New Deal plan, suggesting that fossil fuel companies should face legal scrutiny for misleading the public.

"They have lied and lied and lied when they had the evidence that their carbon products were destroying the planet and maybe," Sanders said, "we should think about prosecuting them as well."

Former President Barack Obama left office three years ago, but on Wednesday night, his legacy hovered over the Democrats vying for the job he once held.

Buttigieg turned a question about unity toward the former president. Harris defended Obama as a way to attack Gabbard. And a host of candidates -- led by Biden -- touted their ability to rebuild the coalition of voters that elected Obama.

The focus on Obama came days after the former president made his most political comments in months. The former president, in comments to donors last week, urged 2020 Democrats to by "rooted in reality" to avoid turning off key swaths of the electorate and not to be "diluted into thinking that the resistance to certain approaches to things is simply because voters haven't heard a bold enough proposal."

With Obama in the news, the candidates responded.

"As President Obama commented recently, we are not in a different reality than we were even 12 years ago," Buttigieg said.

"I think it's unfortunate that we have someone on this stage that is attempting to be the Democratic nominee for the president of the United States who during the Obama administration has spent four years full-time on Fox News criticizing President Obama," Harris said to Gabbard.

The politics around Obama and the current debate remain complicated. He is -- by far -- the most popular Democrat in the country, making it difficult to criticize him, even though some candidates have outlined policy differences on issues like deportations.

On Wednesday night, though, it was all praise.

"We're aiming to do in this cycle is build off that progress," said Democratic National Committee Chairman Tom Perez, who was Obama's labor secretary. "Not reflect on some nostalgia, but reflect on the remarkable lessons of how we can indeed get things done."

For the first time, a Democratic presidential debate wasn't the biggest political story on the day it took place.

The explosive testimony in the House's impeachment inquiry dominated headlines and cable news all day Wednesday, and -- even though there is no real disagreement among the Democratic candidates that Trump should be impeached -- it was the first topic moderators raised.

Sanders urged Democrats to focus on policy matters, rather than just Trump's impeachment.

"He is likely the most corrupt President in the modern history of America. But we cannot simply be consumed by Donald Trump. Because if we are, we are going to lose the election," Sanders said.

Warren, meanwhile, used the topic to highlight her pledge to break Washington's long-standing pattern of top campaign donors receiving ambassadorships -- such as Gordon Sondland, Trump's ambassador to the European Union who gave $1 million to his inauguration fund.

"We are not going to give away ambassador posts to the highest bidder," Warren said.

The first four Democratic debates featured lengthy clashes between the progressive and moderate candidates over health care: whether to push for Medicare for All or instead attempt go the less costly route of expanding Obamacare with a public option.

Nobody wanted a fifth round.

The candidates didn't press to go there. The audience -- at least those chattering about it on social media -- had no appetite for it. And the moderators only hit health care in a perfunctory way.

Each of the four leading candidates quickly hit their marks. Buttigieg touted his "Medicare for all who want it" plan. Biden questioned the cost of Medicare for All. Warren touted her new plan. Sanders recycled his laugh line, thanking the moderators for going to him and saying, "I wrote the damn bill."

And then everyone seemed happy to move on.