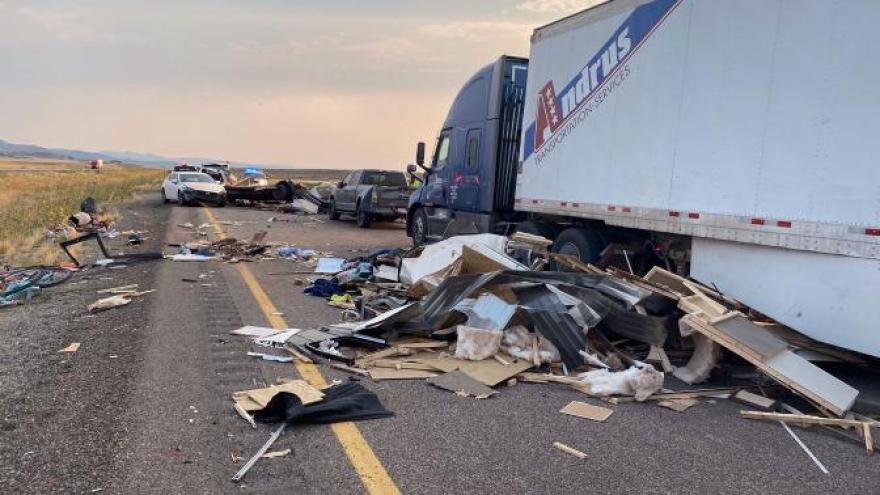 A sandstorm in Millard County, Utah, caused reduced visibility and led to a series of crashes on I-15 July 25, officials said.

(CNN) -- Eight people are dead and several more were critically injured when authorities say a sand or dust storm caused visibility issues that led to a series of crashes involving 20 vehicles in Utah Sunday evening.

The crashes happened on I-15 near Kanosh, the Utah Department of Public Service (DPS) said in a news release.

Four of the deaths were adults and four were children under the age of 15, according to a press release from the Utah Department of Public Safety.

Ten people were transported to area hospitals, and at least three of those people are in critical condition.

"It appears that 20 vehicles were involved in Sunday's crashes after high winds caused a sand or dust storm and impaired visibility on the roadway," the release said. "The Utah Highway Patrol summoned troopers from Richfield and Beaver to assist. Multiple ground and air ambulances also responded to transport victims."

Images of the crash site show multiple tractor trailers and several damaged passenger vehicles littering the road, with debris scattered for yards. At least one vehicle appears to have had its passenger doors ripped off.

DPS closed the road in both directions following the crash, which occurred just before 5 p.m., officials said.

A strong thunderstorm was reported southeast of Kanosh around 4:30 p.m., with strong winds occurring as the storm decayed, CNN Meteorologist Gene Norman said. A nearby report of a 51-mph wind gust was also recorded.

The crash occurred in a region that is experiencing some of the worst drought conditions in the country, which makes dust storms more likely. The entire state of Utah is in the two most extreme drought categories as of last week, according to the US Drought Monitor.

Though the weekend thunderstorms brought beneficial rain to isolated areas, the precipitation wasn't significant enough to prevent gusty winds from kicking up dust and dirt and carrying it for miles. The National Weather Service on Sunday noted a different storm, south of the crash, also created a dangerous dust storm.

Names of the crash victims won't be released until 24 hours after their families have been notified, the release said.

Kanosh is about 155 miles southwest of Salt Lake City.