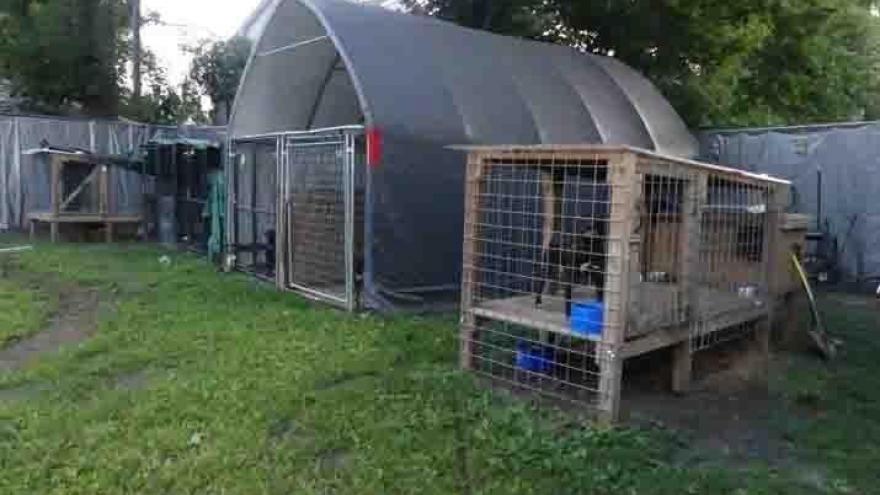 MERIDEN, Connecticut (WFSB) -- The state’s Attorney General is seeking state custody of eight pit bulls that were believed to have been involved in a multi-state illegal dog fighting ring.

The dogs were seized in a raid of a Meriden property at 109 Britannia St. back on July 31.

What neighbors’ thought was part of dog’s normal upbringing, was actually, according to police, part of their life as fighters in an illegal multi-state ring.

Neighbors who did not want to go on camera, remember the last night of July when police swept through this property on Britannia street in Meriden and seized these eight dogs.

Officials believe they’re all between one and five years old.

Neighbor Two said, “they don’t jump at the fence or anything like that. They’re not aggressive so the only time I heard them bark and scream the way they did was the day Animal Control was taking them.”

Neighbor One said, “Constant barking at all hours of the night, owners going out and yelling at them. I saw the owners walking the dogs, they’d be skinny, but they looked like nice dogs though.”

The affidavit reveals the dogs were licensed and belonged to Jose and Nelson Rivera.

We did get in contact with one of them, but at their lawyer’s advice, they declined to comment.

The evidence in the affidavit also paints a picture of the alleged operation.

“That hurts, no one should be treating their animals like that. That’s not right,” said Neighbor One.

Neighbor Two said, “I just hope that wasn’t the case, because that’s not what we witnessed or saw. The pictures do look disturbing, like that little ring thing, I don’t know what dog fights look like. I’m hoping that’s not what it was.”

Officials said the dogs appear to be between 1 and 5 years old, and are physically healthy. Two of them had healed scars that are consistent with dog fighting.

Also, a state animal control officer determined two dogs were too aggressive to be safely removed and returned to their kennels for a complete examination, a press release said.

“Dog fighting is cruel and illegal. These pit bulls were viciously abused and conditioned to be aggressive and violent fighters. A multistate police investigation is ongoing and those responsible for these heinous crimes will be held to justice. We are moving today for permanent state custody to ensure the safe care of the abused dogs,” said Attorney General William Tong.

The dogs are currently in state police custody amid an ongoing investigation into the dog fighting ring.

Tong is seeking to place the dogs under permanent custody of the Dept. of Agriculture.

“Dog fighting is a despicable illegal underground activity with negative ramifications for the domestic animals subjected to this abuse,” said Agriculture Commissioner Bryan P. Hurlburt. “We encourage anyone who suspects such an activity of taking place to report it to the proper authorities to ensure the health and safety of the animals.”