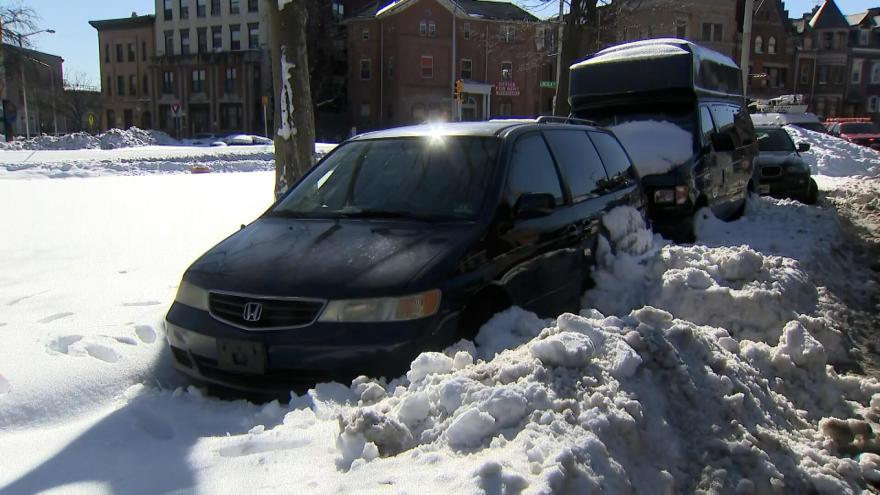 Newark firefighters rescued a 77-year-old woman from this minivan on Thursday.

(CNN) -- Firefighters in Newark, New Jersey, on Thursday rescued a 77-year-old woman who said she had been trapped inside her van for at least four days during this week's winter storm.

The woman was identified by CNN affiliate News 12 New Jersey as Janet Ward, who is currently living in the vehicle. She told the station she had parked Sunday night before a snowplow blocked her in with snow.

"I was blowing the horn to tell them I was in here. But they didn't get the message, so I've been in here ever since," she said. Fortunately, she had food and water with her, the station reported.

According to a news release from the Newark Department of Public Safety, the woman contacted police at 3:30 p.m. ET on Wednesday. She told them she was unable to leave her van because it was stuck in the snow.

However, officials said there was "human error" in logging the address she provided, and when police responded they were unable to find her blue mini-van. Authorities tried to contact her but were unsuccessful.

Public Safety Director Anthony Ambrose said officials "combed through our records to pinpoint exactly when this incident was initially reported to us."

Officials didn't hear from the woman again until Thursday at 9:30 a.m., when she got in touch with the Newark Fire Department.

First responders arrived on the scene six minutes later, the officials' news release says, and shoveled a path to her door, freeing her. According to the news release, the woman refused medical attention and declined help finding a shelter or a family member's home.

"I don't want this to happen to anybody else," Ward told News 12 New Jersey.

The statement from the Department of Public Safety added that the Newark Office of Homeless Services is "working to offer assistance to the woman."

"We regret that human error played a role in delaying our response to the correct address, although we attempted to call her for a correction," Ambrose said. "I'm grateful that she reached out again today and that this incident didn't end tragically."