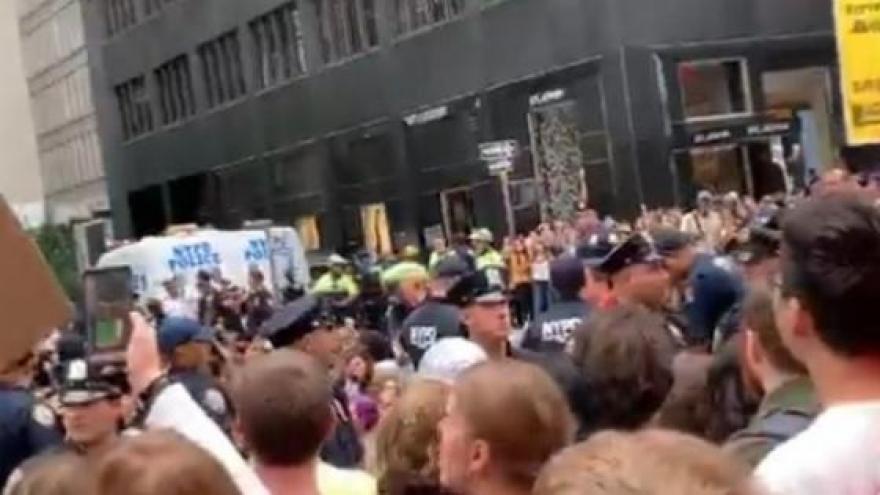 Protesters outside a Microsoft store on 5th Avenue in New York City protesting the company's contract with ICE.

The demonstrators staged a sit-in at the Microsoft store on Fifth Avenue to demand the tech company stop allowing the US Immigration and Customs Enforcement (ICE) to use their technology, according to a press release from the "Close the Camps NYC" coalition that organized the protest.

"As members of this society it is our responsibility to hold US corporations accountable," said Beatriz Lozano, an organizer with Close the Camps NYC. "By being complicit in their actions we are being complicit in the targeting of the Latinx community and the racist torture and trauma that is being inflicted. We have the power to end this cruelty. "

In videos posted to Twitter, protesters could be seen in front of the Microsoft store holding signs and chanting "this is the price for business with ICE."

The NYPD spokesman said 50 women and 26 men were arrested.

"We're grateful to the NYPD for their help with protestors at our store on 5th Avenue. We've closed the store for the rest of the day and look forward to opening our doors again soon," a Microsoft spokesperson said in a statement to CNN.

The spokesperson also sent a June statement from Microsoft President Brad Smith in which he discusses his take on immigration bills and how immigrant children need protection.

Microsoft CEO Satya Nadella also wrote his thoughts on immigration in a June article on LinkedIn.

"I want to be clear: Microsoft is not working with the U.S. government on any projects related to separating children from their families at the border," Nadella wrote. "Our current cloud engagement with U.S. Immigration and Customs Enforcement (ICE) is supporting legacy mail, calendar, messaging and document management workloads."

Last month, 100 people were arrested when the same coalition held a protest against ICE on Manhattan's West Side Highway, temporarily closing all lanes of traffic.