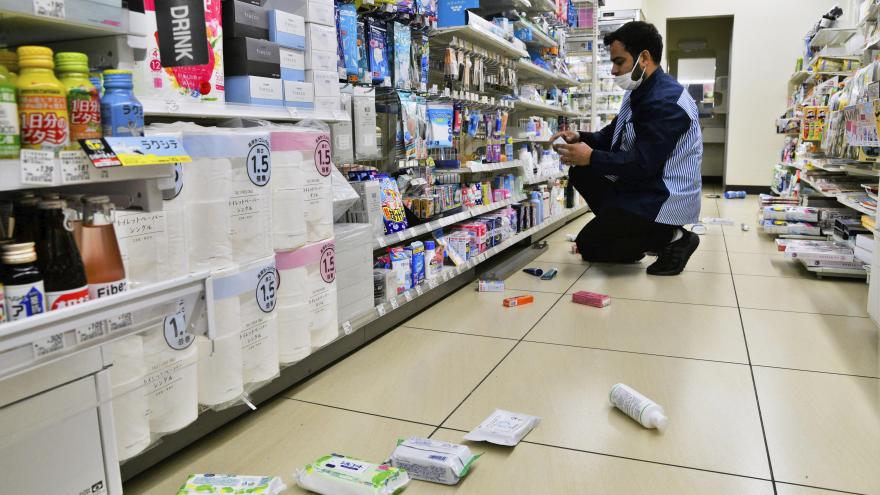 (CNN) -- A tsunami advisorywas issued by Japanese officials Wednesday following a 7.3-magnitude earthquake that hit off the coast of Fukushima prefecture, where a 2011 quake caused a disaster at a nuclear power plant.

The tsunami advisory was made for Fukushima and Miyagi prefectures in eastern Japan following the quake that had a preliminary epicenter depth of 60 kilometers (37 miles), according to the Japan Meteorological Agency.

The advisory warns of tsunami heights reaching up to 1 meter above normal tidal levels, with the initial waves reaching shore around midnight local time (11 a.m. ET).

Tremors could be felt in Miyagi and the capital Tokyo, with footage showing shaking lights and buildings. The quake knocked out power to more than 2 million households in Tokyo and nearby prefectures, Tokyo Electric Power said on its website.

According to the US Pacific Tsunami Warning Center, a Pacific-basin-wide tsunami is not expected at this time.

One of Fukushima's nuclear power plants was being checked and a second one was unaffected, Chief Cabinet Secretary Hirokazu Matsuno said in a press conference.

The Japanese government said agencies will "work together to make every effort to respond" following the quake, Japan's Prime Minister Fumio Kishida's office wrote on Twitter.

The epicenter of Wednesday's quake was 55 miles (89 kilometers) from that of the devastating 2011 quake that caused a tsunami with 30-foot waves that damaged several nuclear reactors in the area. More than 22,000 were killed or went missing in that disaster. Deaths were caused by the initial earthquake and tsunami and by post-disaster health conditions.

The 2011 Japan earthquake was 9.1 magnitude, some 63 times stronger, and released about 500 times more energy than Wednesday's quake.