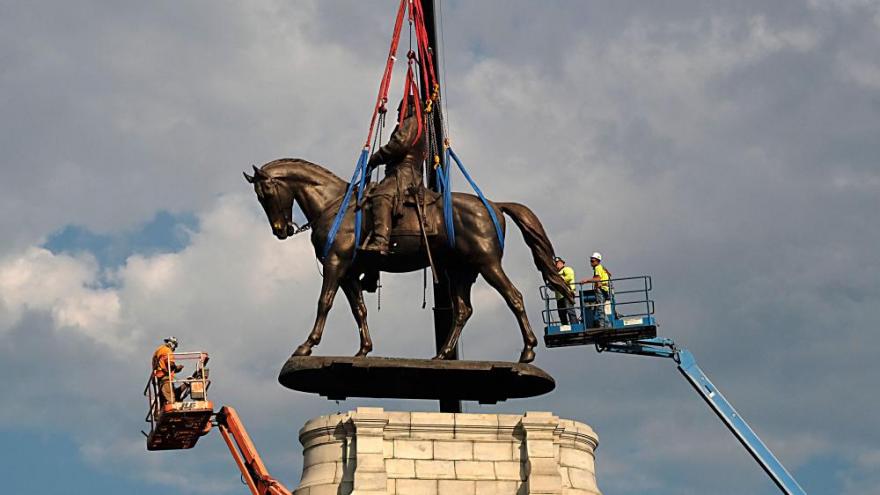 A statue of Confederate Gen. Robert E. Lee is removed from its pedestal on Monument Avenue on September 8, 2021, in Richmond, Virginia.

(CNN) -- After 73 Confederate monuments were removed or renamed in 2021, there are now 723 left in the US, according to the Southern Poverty Law Center.

The findings were announced Tuesday during the group's news briefing on the release of the third edition of "Whose Heritage?" The report is part of the organization's efforts toward "eradicating hate and white supremacy" in collaboration with activists nationwide.

The removals and renamings come at a time when Americans continue to grapple with whether Confederate monuments belong in public spaces. These statues stand as symbols of racism in the US dating back to the Civil War, civil rights activists and some historians say.

Although the 73 removals do not compare to the data from the previous year, the report's authors say grassroots campaigns are steps in the right direction.

"Destroying these monuments and these memorials will not erase the legacy of slavery," said SPLC researcher Kimberly Probolus on Tuesday. "But abolishing these memorials is a first and essential step in combating the white supremacist values of the Confederacy ..."

After the murder of George Floyd in 2020, the SPLC reported that 157 memorials were removed in the US. A year of heightened awareness about police brutality, nationwide protests and calls for action sparked the most Confederate monument removals in one year, according to the SPLC.

Amy Spitalnick, the executive director, of Integrity First For America -- a civil rights nonprofit -- stressed that the existence of Confederate statues continues to have dangerous consequences.

"Confederate imagery continues to serve as a rallying cry for far-right extremists, not just across the country, but we're now even seeing across the globe," Spitalnick said. "In certain ways ... that's what makes it all the more crucial that we tackle this legacy of hate and violence head on and that we not allow these symbols to be glorified."

The SPLC reported that the remaining 723 Confederate monuments are memorials that stand in the US and its territories. That did not account for the 741 roadways, 201 schools, 51 buildings, 38 parks and 22 holidays honoring the Confederacy, the group said.

With the remaining Confederate memorials that "we know of still publicly present across the US, there is still a lot of work to be done," said Lecia Brooks, the chief of staff and culture for the SPLC and the SPLC Action Fund.

The fight to get Confederate monuments removed had been gaining steam before 2020, but the racial and political reckoning accelerated calls for the removals. Many civil rights activists argued that structures were racist and offensive because they honored leaders who promoted the enslavement of Black Americans.

Last year, a towering statue of Gen. Robert E. Lee was removed in Richmond, Virginia, and added to the growing list of Confederate symbols that had been taken down across the country. This week, Richmond began the process of removing the pedestals that once held the monuments to the Confederacy, which included Thomas "Stonewall" Jackson, Jefferson Davis and others, according to CNN affiliate WRIC.

"We don't want our future to be reflective of honoring people that were leaders within the confederacy," said the Rev. Rhondalyn Randolph, president of a local NAACP chapter in Kentucky. Randolph is working to remove a Confederate monument in the city Owensboro.