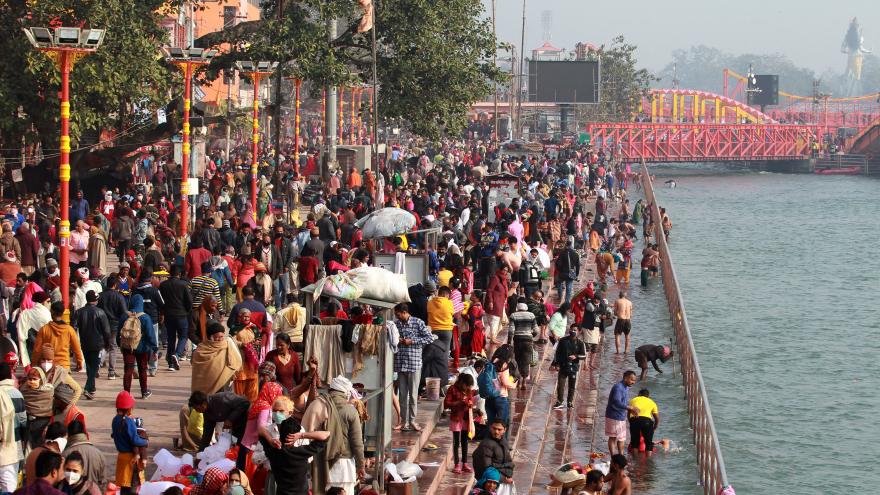 (CNN) -- Every year, tens of millions of Hindu pilgrims wade into the Ganges River, seeking salvation from the eternal cycle of life and death. Holy men lead prayers and offer blessings, and devotees wash their sins away in the sacred waters.

But this year, India's Kumbh Mela -- the largest pilgrimage on Earth -- is drawing alarm, with some authorities warning of a potential mass Covid-19 outbreak if crowds gather and bathe together without masks.

Kumbh Mela, a months-long mass pilgrimage, is one of the most important Hindu celebrations. According to some myths behind the festival, the Ganges river water turns into "amrita," or the nectar of immortality, on particular days.

Bathing in the sacred waters of the "sangam," where the Ganges, Yamuna and Saraswati rivers meet, is believed to achieve "moksha," or release from the cycle of life and death.

The pilgrimage was supposed to begin on Thursday, known as Makar Sankranti, or the first day of the holy baths. But this year, officials decided to push the pilgrimage back a month.

"We will issue for (the pilgrimage) to start sometime in the third week of February," and run through the end of April, said Madan Kaushik, Uttarakhand Minister for Urban Development and Housing. Within those few months, there will be four days designated for people to dip into the Ganges, he said.

"This festival will not be postponed further. We will take the precaution and do everything possible but we will not delay or cancel the Kumbh Mela," he added.

Despite the postponement, hundreds of thousands of people from across the country congregated in the ancient city of Haridwar, in the northern Uttarakhand state, on Thursday to celebrate Makar Sankranti. 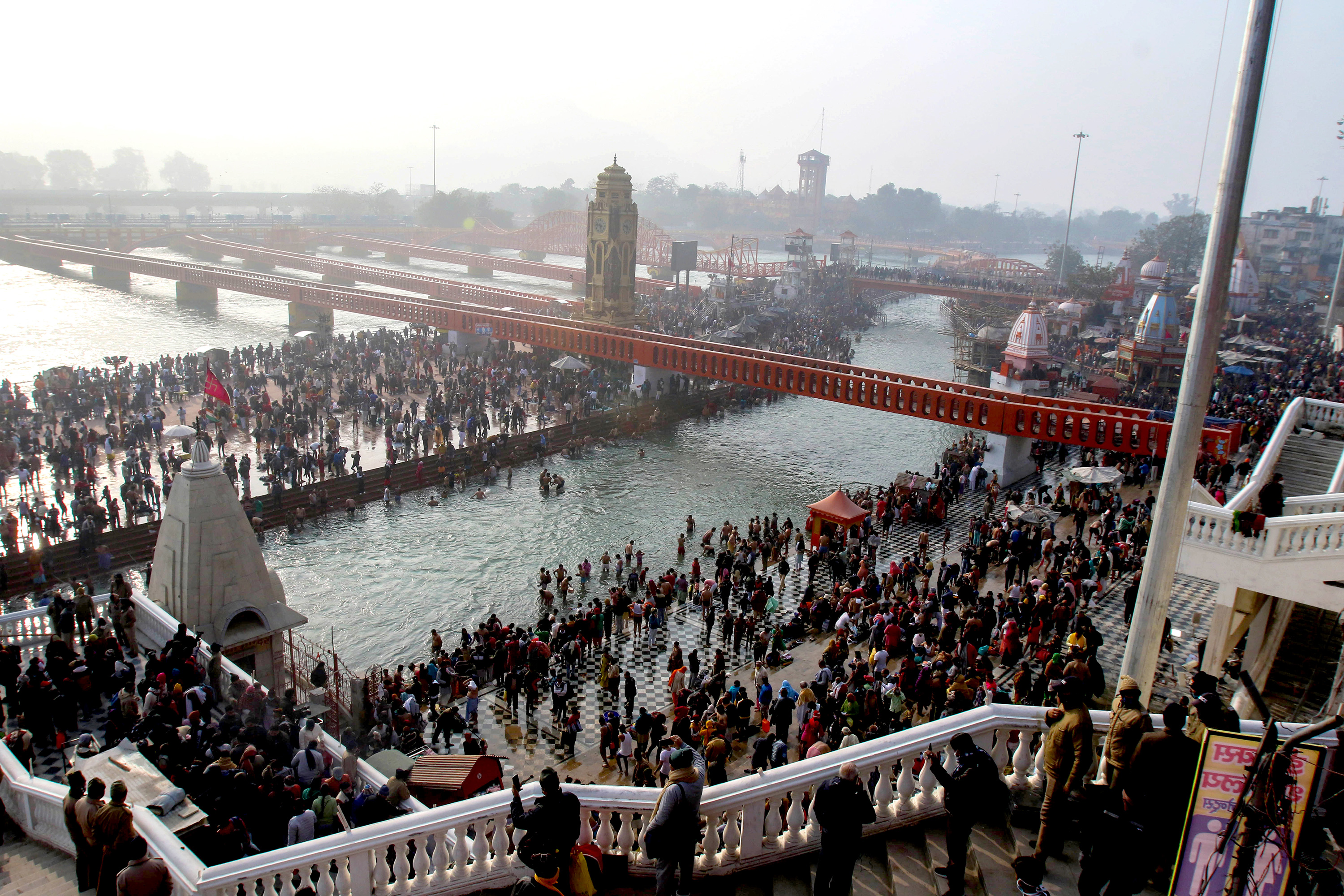 Devotees began arriving on Wednesday; photos show families taking dips in the river, groups walking or sitting along the banks, and holy men performing evening prayers. Shopkeepers decorated their storefronts, while open-air vendors laid their goods along the streets in anticipation of the crowds. By Thursday, about 700,000 people were in attendance, according to Kaushik.

As the first throngs of people dipped into the waters, authorities braced for the potential of a super-spreader event, with the country still reporting between up to 20,000 new Covid-19 cases a day.

Globally, India has the second highest number of cases and third highest death toll. As of Friday, it has reported more than 10.5 million cases and 151,000 related deaths, according to a tally by Johns Hopkins University.

And though the pilgrimage has been postponed, it could still pose a threat when it takes place a month from now. Last year, up to 55 million people attended the festival over several months, according to CNN affiliate CNN-News18. Even if the attendance falls this year, that's still millions of people congregating in close quarters for hours a day, sharing public facilities, having meals together, and bathing in the same waters.

However, leaders warn that vaccine or not, the danger of infection is still high, and residents should continue taking precautions.

"Covid protocols will have to be implemented during this, even a bit of looseness can cause damage," said Prime Minister Narendra Modi on January 11.

The Uttarakhand High Court issued a court directive on January 11, highlighting the danger of the festival and urging authorities to provide more detailed safety measures. Unless the flow of people is controlled, with safe accommodation and transportation, "Kumbh Mela 2021 may become the breeding ground for spread of COVID-19 pandemic," the court warned.

"Since people from all over the country and abroad do congregate at Kumbh Mela, the infection of COVID-19 may be carried back by the pilgrims to different parts of the country," the court said, adding that the government needed "concrete plans" to minimize the threat.

Siddharth Chakrapani, the organizer of this year's festival, acknowledged health and safety concerns -- but said they were taking precautions, according to CNN-News18. "I have confidence that Mother Ganga will protect all of them," he added.

Devotees coming from outside the city will need to go through thermal scanning and random test sampling, said Haridwar Additional District Magistrate KK Mishra on Thursday. District administrators have been deployed throughout the city to raise awareness, and provide safety training for shopkeepers and business owners, he said.

On Thursday, volunteer teams conducted temperature checks on devotees near the Ganges. People who want to partake in the holy baths are also required to register online and receive e-passes, according to CNN-News 18. National guidelines are still in place, including mandatory face masks and a required six-feet social distancing rule in public spaces.

But it's unclear how closely those precautions will be followed, or how they will be enforced -- especially during next month's pilgrimage.

Photos from Thursday show people packed together at the river banks, without the required distance between individuals. Many of those pictured wore face masks or coverings, but a sizable number were bare-faced as well, including children and the elderly -- and especially during group rites.

There's also no guarantee that people will wait until the official start date. The significant religious dates are based on planets' astrological positions, so devotees could well travel to the Ganges on those dates for the holy baths, regardless of authorities' approval.

Authorities have good reason to be nervous. Around the world, several religious gatherings have caused Covid-19 clusters, some spreading beyond their community to the entire nation.

One of the earliest and most well known cases was the Shincheonji religious group, which became the center of South Korea's outbreak in February. By March, thousands of cases had been linked to its members -- more than half of all the country's cases at the time -- prompting local lockdowns. and extensive contact tracing and testing.

In the US, too, churches have found themselves at the center of community outbreaks; one church in California was linked to at least 70 cases, while another church in Ohio saw more than 90 related cases.

India faced its own crisis in mid-March, when a gathering of a conservative Muslim missionary group in New Delhi led to a highly publicized cluster. Thousands of members traveled from across the country and abroad to the event -- by the following months, more than 4,200 cases had been linked to the gathering, across 23 states and union territories.

But the Muslim group's gathering was met with a much stronger fallout and public hostility than the instances in other countries, largely due to India's long-standing Muslim-Hindu tensions, which ratcheted up alongside fear and paranoia during the pandemic.

The majority of India's 1.3 billion population is Hindu; Muslims make up about 200 million people in the country. The Delhi cluster amplified existing prejudices, which have been growing in recent years under Modi's Hindu nationalist Bharatiya Janata Party (BJP). Muslims around the country reported being harassed and beaten; some had their houses raided by police; some BJP leaders described the gathering as an act of terrorism.

Other non-Muslim gatherings still went on during the same time period but faced significantly less backlash. For instance, the chief minister of Uttar Pradesh state traveled to another city for a Hindu ritual even after the lockdown was announced, reportedly surrounded by at least 20 people. Afterward, his media adviser told local media there were around 10 people present.

There was almost no sign of public outcry this week, either, for the hundreds of thousands of Hindus who congregated in Haridwar. Modi, who has a strong Hindu base, tweeted about the holiday on Thursday, making no mention of Covid-19 or safety measures.

"Makar Sankranti (the first day for holy baths) is marked with enthusiasm in several parts of India," he wrote. "This auspicious festival illustrates India's diversity and the vibrancy of our traditions."

Indian political commentator Sanjay Kapoor isn't surprised that authorities are pushing ahead with the pilgrimage next month despite obvious safety concerns.

"I don't think it will ever be canceled -- it's too big," he said, adding that the festival has grown substantially since the BJP came into power, reflecting their emphasis on Hindu nationalism -- as well as the cultural and political sway of India's Hindu majority. It's all the more stark when considering that the Muslim gathering in March had been "venomously" targeted and made an example of, he said.

"They're not even allowing Parliament to come together on account of Covid, but these mega events are allowed to happen. How do you explain that to the world?" Kapoor said. "The pandemic hasn't gone away."