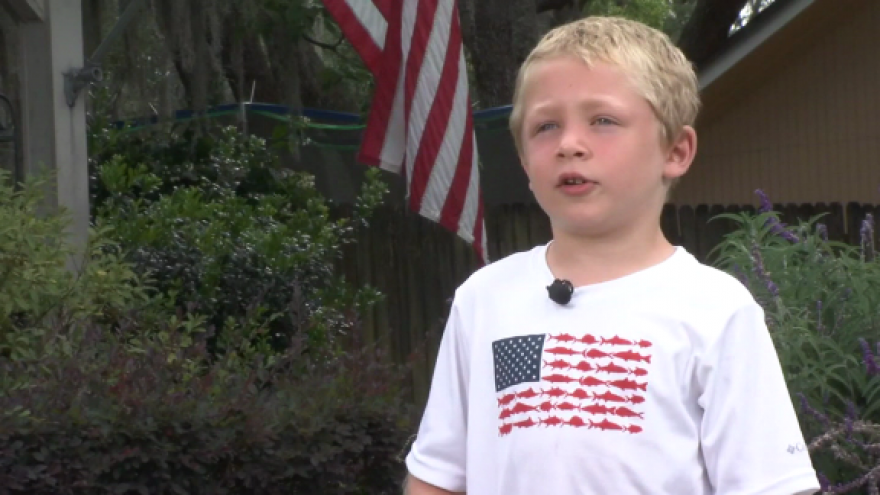 (CNN) -- A 7-year-old boy in Florida is being hailed a hero after he swam ashore to get help when his sister and dad got swept away by a current.

Steven Poust told CNN affiliate WJXT that he anchored his boat on the St. Johns River in Jacksonville, Florida, to let his two children, Chase, 7, and Abigail, 4, swim, on Friday.

All of a sudden, Abigail, who usually hangs out at the back of the boat, had to let go because the current was so strong, Chase said.

The 7-year-old decided to also let go in order to try to keep her from drifting, but then he was stuck.

Poust jumped in to try and help them, and told Chase to swim to shore while he tried to reach his daughter, who was wearing a life jacket.

"I told them I loved him because I wasn't sure what's going to happen," Poust said. "I tried to stick with both of them. I wore myself out. She drifted away from me."

It took Chase an hour to get to shore. He told WJXT that he floated on his back and doggie paddled so he wouldn't get worn out. When he reached land he ran to the nearest house for help.

Meanwhile, his dad and sister drifted about a mile and a half to two miles away from the boat's location, according to the Jacksonville Fire and Rescue Department (JFRD).

JFRD reached the boat but had to call in other agencies to expand the search, spokesperson Eric Prosswimmer said in a news conference.

If it wasn't for the help of his colleagues the outcome could have been different, Prosswimmer said.

"We had every resource we could have possibly had coming quickly and we're happy to say all three have been recovered, and all three are doing well," he said. "We couldn't ask for a better outcome."

Correction: An earlier version of this story gave the wrong call letters for CNN affiliate WJXT.