7 things to watch in tonight's Democratic debate in South Carolina 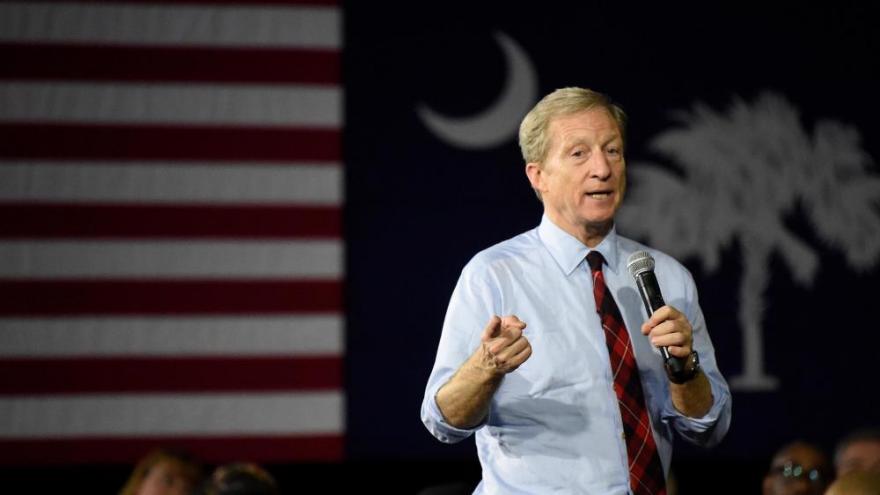 Democratic presidential hopeful Tom Steyer speaks at a campaign town hall event on February 10, 2020, in Rock Hill, South Carolina. If Biden loses South Carolina, it won't just be because Sanders is surging -- it'll be because businessman Tom Steyer played the role of spoiler.

And tonight will test how well he wears that crown.

This is the final time that the primary field will appear together onstage before "Super Tuesday" on March 3, when Sanders could, with victories in California and Texas, claim a runaway lead in the Democratic nomination fight.

His rivals know it and, unlike during the last time out in Las Vegas, appear dead set on blunting his momentum.

"This debate needs to be about one candidate," an adviser to former New York Mayor Michael Bloomberg said. Both former South Bend, Indiana, Mayor Pete Buttigieg and Sen. Amy Klobuchar have, since Nevada, told voters that they should worry about Sanders atop the party's ticket, a point Butitgieg reprised at a CNN town hall on Monday night. Former Vice President Joe Biden has been telegraphing his shots at Sanders over the last 48 hours and Sen. Elizabeth Warren looks primed to throw a few jabs of her own.

Warren will probably focus more of her attention on Bloomberg, whom she, like Sanders, has cast as the billionaire embodiment of all that is broken with the democratic process. Both progressives are expected to target the former New York mayor, who couldn't cope with the onslaught during his debate stage debut last week.

Here is what to watch for at tonight's Democratic debate:

Is Bernie Sanders ready for what's coming his way?

The Vermont senator is now the unquestioned frontrunner in the primary. On Tuesday night, he is going to be treated like it.

Viewers got a taste of what's coming in the second hour of the Las Vegas debate, a mouthful in the days since, and a second serving during a CNN townhall on Monday night.

Sanders should expect to face pointed questions over how he will pay for his revolutionary suite of public policy proposals, his past comments about Fidel Castro's Cuba and the behavior of his supporters on social media. To start.

His answers on Monday night suggest he still has some preparation to do. Sanders suggested that criticism from Democratic House members over his Castro comments stems from their allegiance to other candidates; South Florida Reps. Debbie Mucarsel-Powell and Donna Shalala, who have denounced Sanders' remarks, have not yet endorsed in the primary.

For Sanders, though, this will be about more than playing defense. His campaign launched a late, $500,000 ad buy in South Carolina, as he tries to secure a close second-place finish, at least, and press his advantage ahead of the critical Super Tuesday contests next week.

Can Mike Bloomberg find his footing?

Bloomberg had a rough first debate. And his team knows it.

Bloomberg, ahead of the debate, is signaling an all-out focus on Sanders, the race's ascendant frontrunner. The former New York mayor, just in the last few days, has slammed Sanders for past laudatory comments about Cuban leader Fidel Castro, suggested nominating him would be a "fatal error" and taken on the Vermont senator's less-than-stringent voting record on guns.

"This debate needs to be about one candidate: Bernie Sanders," said a Bloomberg adviser.

The question for Bloomberg, though, is whether he can deliver those lines under the lights of the debate stage and as his opponents, many of whom have shown outright antipathy towards him, take him on.

Ahead of the debate, a person familiar the mayor's preparation told CNN that the former mayor's team is well aware that the candidate's demeanor -- one where he struggles to show empathy and can come across as dismissive and snippy -- is a challenge.

It's unclear what the campaign is constructively doing to address the clear deficit.

That means he'll need to turn in his best performance yet in the final debate before those states all vote.

His approach to Sanders was made clear in a web ad Biden's campaign released Monday: Highlight reports of the Vermont senator's consideration of a 2012 Democratic primary challenge to then-President Barack Obama. He'll characterize Sanders as unable to continue Obama's legacy -- a potentially potent message in a state where more than half the party's primary electorate is African American.

Against Bloomberg, Biden could continue to pile on over Bloomberg's past support and comments about controversial policies such as stop-and-frisk policing and redlining. His most important audience could be donors, who Biden needs to convince not to sit on their hands and allow Bloomberg to emerge as the strongest Sanders alternative in the Democratic field. After all, Biden's campaign hasn't yet spent a cent on television ads in Super Tuesday states.

Warren commanded the debate in Las Vegas. Her reward: a major boost in fundraising at a time when money concerns were mounting.

But for practical purposes, at least in Nevada, Warren's headline-grabbing night came too late. With so many of the votes already cast during early caucus days, the sense of momentum that followed her offstage didn't translate into a strong showing on Saturday.

This time around, though, she will have an opportunity to make her case -- and the case against her rivals -- with South Carolinians still days away from casting their primary ballots.

From the early days of her campaign, Warren has put issues specific to African-American voters, especially women, at the center of her plans. Her challenge on Tuesday night will be to find a happy medium between the attack dog performance she put in last week, when she spent nearly two hours eviscerating Bloomberg, and making a winning appeal to voters here on her own behalf.

Buttigieg to keep focus on Sanders

Buttigieg, possibly more than any other candidate, has warned about the rise of Sanders, hoping that blunt assessments may turn up Democratic fears about the Vermont senator.

Buttigieg, at the last debate, urged Democrats to "wake up" to the possibility that Sanders is on track to be the nominee. After Sanders ran away with the Nevada caucuses, Buttigieg said Sanders' "inflexible ideological revolution that leaves out most Democrats," And on Monday, Buttigieg tweeted that Democrats "can't risk nominating someone who doesn't recognize" human rights issues in Cuba, an attack against comments the senator made about Cuban leader Fidel Castro on 60 Minutes.

Buttigieg aides have said privately that the mayor is not the kind of candidate that will keep campaigning if he doesn't see a path towards the nomination, something acknowledged by a Buttigieg campaign memo worrying that Sanders could have an "insurmountable delegate lead by March 3.

But Buttigieg's problem in debates -- especially in last week's debate in Las Vegas -- is the fact that Klobuchar was able to draw the former mayor into repeated, direct confrontations that somewhat obscure his attacks on Sanders.

Buttigieg will also likely be called to again address his lack of support among black voters, who are expected to make up a majority of the Democratic primary electorate in South Carolina on Saturday night.

Can Klobuchar break through the crowded middle?

Minnesota Sen. Amy Klobuchar rose into the upper ranks of the Democratic presidential race on the strength of her debate performances -- and vaulted to a stronger-than-expected third-place showing in New Hampshire on momentum from her widely praised debate there.

But her last debate was uneven, as Klobuchar and Buttigieg pulled each other into contentious back-and-forths that did little to elevate either of the two candidates vying with Biden and Bloomberg for the moderate lane.

Klobuchar needs to surprise again in order to maintain a path forward in the Democratic race. Her campaign is leaner than some of her rivals, so she's not under immediate pressure to drop out. But Super Tuesday could be a major disappointment without an infusion of enthusiasm and money to spend on ads.

She too, is expected to target Sanders as a way to show she is the moderate candidate best positioned to take him on.

"Just as Amy has shown on the debate stage, she is the best person to take on Bernie Sanders and the best candidate to beat Donald Trump," campaign manager Justin Buoen wrote in the memo released on Monday. "Both ​on​ and ​off​ the debate stage, Amy has highlighted the consequences of having Bernie Sanders lead the top of the ticket, including his divisive politics and health care plan that would kick 149 million Americans off their insurance."

If Biden loses South Carolina, it won't just be because Sanders is surging -- it'll be because businessman Tom Steyer played the role of spoiler.

Steyer has made winning over black voters in South Carolina his campaign's foremost objective -- and polls show he's had some success, with an NBC/Marist poll Monday showing him in third place at 15% overall and 19% with black voters in the state.

That makes Saturday's primary the Super Bowl for a candidate whose support appears to be largely made up of people who previously backed Biden.

Steyer has already spent $21 million on ads in South Carolina. But his results in Nevada, where he spent $15 million on TV ads and got about 9 percent of the vote, show the limits of his spending. Steyer didn't qualify for the last debate, so his return to the stage Tuesday is likely his last, best chance to vault himself into serious contention.

How will he do it? In previous debates, Steyer has largely been a jovial presence -- but has insisted his business experience best qualify him to take on Trump on the economy. He might need to be more aggressive Tuesday night.