7 takeaways from the final Trump-Biden debate 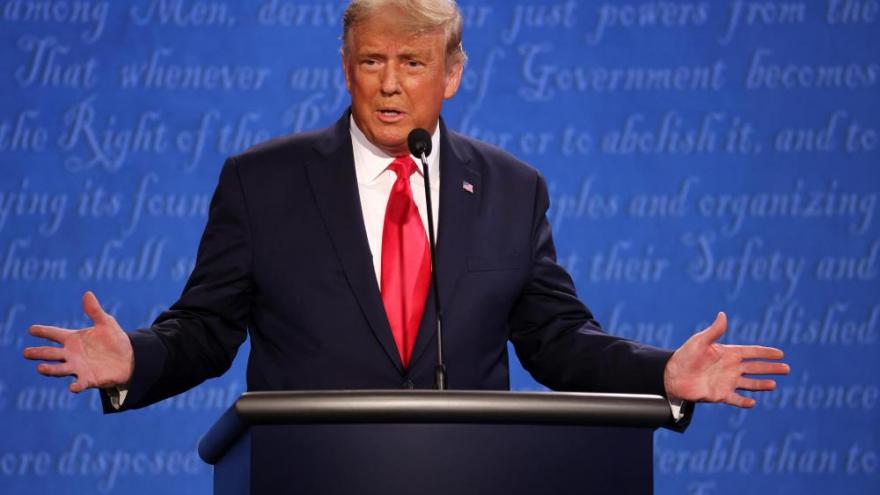 (CNN) -- The second and final showdown between President Donald Trump and Democratic challenger Joe Biden looked much more like a normal debate than their first meeting.

But it probably didn't do anything to change the race's trajectory.

Amid a plethora of lies, Trump hammered Biden for failing to solve problems like institutional racism during his time in the Senate and as vice president, casting him as a typical politician.

Biden lambasted Trump in policy terms, criticizing his handling of the pandemic and his approach to health care, the economy and immigration. But at times, the former vice president got personal -- at one point calling Trump "one of the most racist presidents we've had in modern history."

Here are seven takeaways from the last 2020 presidential debate:

Trump entered Thursday's debate with near unanimous consent among his advisers: cool down. None could say with any confidence whether he would take the advice.

He did, mostly -- aided, in part, by a new muting rule he lambasted ahead of the face-off.

Yes, he still issued falsehoods. Yes, he still lobbed personal attacks. Yes, he downplayed the coronavirus -- the single biggest crisis facing the country -- while taking no responsibility for it. Yes, he insisted that hundreds of migrant children separated from their parents are being well taken care of.

But for most of the face-off, he seemed more subdued and more intent on sticking to a plan. He was even courteous to moderator Kristen Welker of NBC, telling her at one point he approved of her performance.

After the last debate, Trump felt he won and few advisers told him otherwise. But after watching clips of himself, Trump acknowledged that he could tone it down somewhat.

The result was a massive sigh of relief among Republicans, who feared another abrasive performance that turned off voters. And it made for a more substantive debate, with voters able to hear definitive answers.

How that helps Trump isn't clear. Often his answers -- particularly on health care and race -- lacked substance. And he again avoided laying out a concrete second term agenda, something he's failed to articulate for most of the campaign.

But if the race is hinging in part on Trump's behavior, his approach Thursday is more in line with what his team was hoping for.

Trump's very first answer -- which was meant to state how he would lead during the next stage of the coronavirus -- relied instead on looking backward and wishful thinking about a vaccine.

And like many of his answers over the rest of the evening, Trump's central argument seemed to be that things could be a lot worse.

Thought it was delivered in a new, less aggressive style, Trump's answer amounted to the same dismissal of the pandemic he's been offering for months -- one that voters have largely rejected.

As he does nearly every time he is pressed on his pandemic response, Trump cited his decision to close travel to China, though thousands of people were exempt and were still able to enter the country. He insisted the United States was suffering alongside Europe, which is also experiencing new spikes. But unlike Trump, leaders there -- including French President Emmanuel Macron -- have imposed new lockdowns.

And he placed nearly all of his optimism on a vaccine, which he claimed would arrive "within weeks." There is no indication that is true; vaccine trials are still underway and the Food and Drug Administration has imposed rules requiring months of data for emergency use of a new vaccine.

Later, Trump acknowledged his promise of a vaccine "within weeks" was not a "guarantee." But he said he was hopeful for one by the end of the year.

His answers were a sign that Trump doesn't plan to change his approach to coronavirus, even as cases surge. He said as much earlier this week; in a town hall event, Trump responded when asked what he would do differently: "Not much."

Instead, the key distinction Trump sought to make was his aversion to any further lockdowns to prevent further contagion. "We can't close our nation," Trump said. "We can't lock ourselves up in a basement like Joe does."

Biden offered a much bleaker view of the virus, predicting that a "dark winter" is coming as he accused Trump of denying responsibility for its spread in the United States and squandering months that he said should have been used to accelerate production of protective medical equipment and prepare schools and businesses for reopening.

"Anyone who's responsible for that many deaths should not remain as President of the United States of America," Biden said.

Biden was much more measured than Trump in discussing how he'd handle the virus. He said he would establish national standards for opening schools and businesses and would seek stimulus money to prepare them.

He also offered a more dour view of the time line for a potential vaccine -- one that aligns more closely to what public health experts have projected -- by saying that "there's no prospect that there's going to be a vaccine available for the majority of the American people before the middle of next year."

Biden did, though, deliver a unifying moment as he criticized Trump for laying blame on Democratic governors for the virus spreading in their states.

"I don't look at this the way he does -- blue states and red states. They're all the United States," Biden said. He pointed out that spikes have occurred in recent weeks in Republican-leaning states. "They're all Americans," he said.

Trump dusts off his 2016 playbook

With nearly 50 million votes already cast and time almost out to reverse his polling fortunes, Trump resorted to the tactics that helped him win four years ago.

He tried to cast Biden as a typical politician, just like he did Hillary Clinton. He repeatedly pointed out that Biden was in elected office for 47 years, blaming Biden for failing to solve problems like systemic racism.

The tactic could have backfired at times, though, because it gave Biden an opening to recount the policy achievements of the Obama administration.

Trump was less effective, though, in trying to turn a series of convoluted and unproven allegations about Biden's son Hunter into a campaign-altering moment. Outside the right-wing echo chamber Trump and his most fervent supporters occupy, he did not deliver one, and he opened himself up to sharp responses from Biden about Trump's own business operations in China and failure to release his tax returns.

"The guy who got in trouble in Ukraine was this guy," Biden said, pointing to Trump, "trying to bribe the Ukrainian government to say something negative about me, which they would not do." Trump's actions in Ukraine led the House to impeach him.

Trump's eagerness to turn back the clock even extended to falsely accusing Biden of referring to Black people as "super predators" during discussion of the crime bill in the early 1990s. He did not; the term was used by Clinton.

The former vice president's most effective moments Thursday night might have been his evisceration of Trump's economic, health care and immigration policies.

Those policy-focused moments underscored a grim reality for Trump: Though Congress could stand in the way, Biden is campaigning on a series of detailed policy proposals -- and frequently explains what they'd mean to average Americans. Trump, though, has repeatedly failed to detail what he'd seek to do if he wins a second term.

Biden hammered Trump for seeking to have the Supreme Court undo the Affordable Care Act, and its protections for those with pre-existing conditions -- a pool of Americans that Biden pointed out will soon include those who had Covid-19. Trump, who has long promised a plan to protect those people but has never delivered one, denied the reality that their protections would be repealed if his administration's court effort is successful. Biden detailed his proposal to allow Americans to buy into a public health insurance program and introduced a new phrase to describe it: "Bidencare."

He also forcefully argued for increasing the minimum wage from $7.25 to $15 an hour, while Trump said the matter should be left to states to decide.

Most significant could have been the portion of the debate that focused on immigration, when Biden eviscerated Trump over this week's report that 545 children who were separated from their parents at the border have still not been reunited with their families. Trump claimed that the children are "very well taken care of" -- even though they have been apart from their families for months or years.

"They got separated from their parents, and it makes us a laughingstock and violates every notion of who we are as a nation," Biden said.

A question on the "talk" goes unanswered

Trump and Biden were both asked a provocative and important question about race: Could they understand why Black parents give their children the "talk" about how to handle encounters with law enforcement?

Trump's instinct was to insist he's done more for African Americans than any previous president since Abraham Lincoln -- and to attack Biden for his record, including on a crime bill from the 1990s.

Trump didn't specifically address the question, and instead he continued to insist he's done more for African Americans than any previous president since Abraham Lincoln -- and to attack Biden for his record, including on a crime bill from the 1990s.

"I'm the least racist person in this room," Trump said.

Biden, meanwhile, sought to cast Trump as stoking racial divisions, one of the driving arguments of his entire campaign.

"Abraham Lincoln here is one of the most racist presidents we've had in modern history," he said sarcastically, making reference to Trump's previous claim. "This guy has a dog whistle as big as a fog horn."

The candidates' responses were designed less to convince Black voters that either man would be better for them than to convince White voters that Trump is or is not racist. It's one of the factors that has driven down Trump's poll numbers among suburban women, who have been turned off by Trump's constant stoking of divisions.

How Trump simply stating that he is not racist reverses that impression -- given the ample evidence of him stoking racist conspiracies or fomenting racial divisions -- isn't clear. For a candidate who believes he can peel of support among Black men from Democrats, failing to offer any sort of policy or action-based answer seemed like a missed opportunity.

Biden says he 'would transition from the oil industry'

The debate moment that Republicans were seizing on Thursday night was Biden's comment that he "would transition from the oil industry, yes."

"That is a big statement," Biden said. "Because the oil industry pollutes significantly."

He went on to say he wanted a gradual transition to cleaner forms of energy -- but Trump sought to immediately turn the moment into a political advantage in oil- and manufacturing-heavy states.

It's not clear that the moment is the kind of political game-changer Trump might hope it is. It could, however, be problematic for Democrats running in red areas like Texas.

After the debate, Biden's campaign sought to clarify the exchange, saying the former vice president was specifically talking about eliminating oil subsidies.