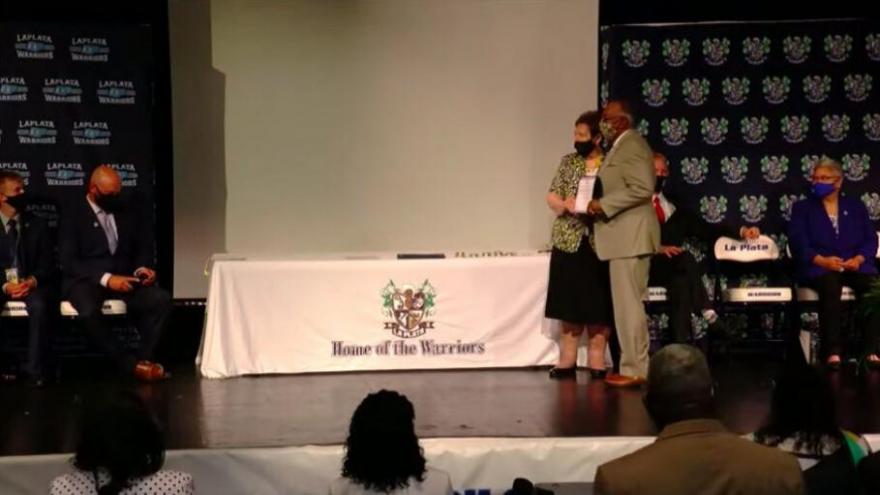 A high school in Maryland held a special ceremony to finally give seven students their diplomas 52 years after they graduated.

(CNN) -- A high school in Maryland held a special ceremony to finally give seven students their diplomas 52 years after they graduated.

Some students from the class of 1969 at La Plata High School were punished for being part of a sit-in that occurred the same year.

"The graduation came on the heels of student unrest, a sit-in and protests spearheaded by black students after no students of color were selected for the majorette or Warriorette squads," Latina Wilson, chairperson of the Charles County Board of Education, said at the ceremony.

The students who participated were able to walk for graduation in 1969, according to Wilson, but the actual diplomas were mailed to them after school ended for the year. Seven diplomas never made it and were returned to the Board of Education.

Fifty-two years later, during the pandemic, Wilson said the school staff found the diplomas still in their envelopes and decided to return them to their rightful owners.

"Your actions improved the culture at La Plata High School and set an example for students who would follow," Wilson said. "You followed your conscience and you risked the consequences. It could have not been easy to stand your ground."

The students' actions and persistence led the school to agree that the selection was unjust. The board of education, at the time, even released a statement saying that the process was undemocratic. The school came up with a new selection process that included both white and black judges as a direct result of the protest.

"We do not wish to bring up old wounds," former student Dale Contee said before she received her diploma. "Naturally we felt hurt and disappointed that we could not receive our diplomas with our classmates, but we want to make it known we were peaceful back then and we are peaceful today."

Contee said none of the students have any animosity towards the current board of education.

"All that we suffered and endured did not make us bitter, it made us better," Contee said.

Those in attendance walked across the stage and finally received their long awaited diploma.