8 killed in shootings at 3 metro Atlanta spas. Police have 1 suspect in custody 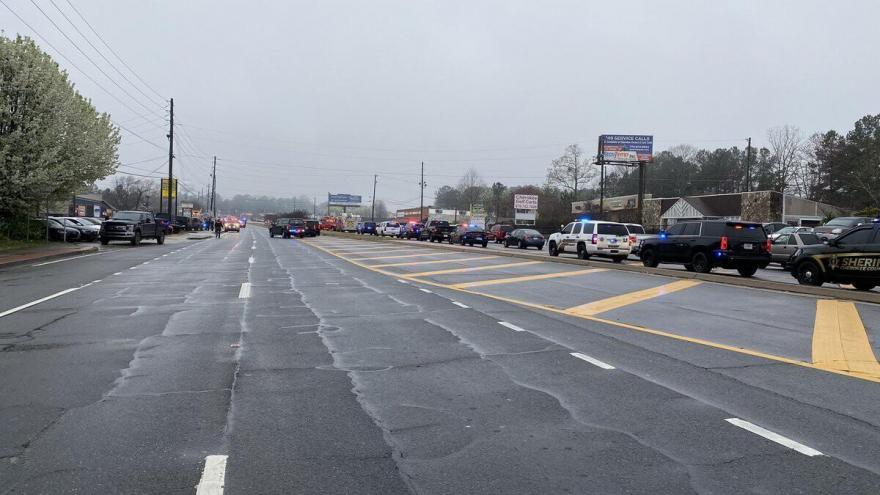 A photo from the Cherokee County Sheriff’s office of the suspect outside of Young’s Asian Spa in Acworth, GA.

(CNN) -- Video evidence suggests "it is extremely likely" that the same person was responsible for the three deadly shootings at massage parlors in the metro Atlanta area, police said Tuesday.

Eight people were killed and one person was wounded in the attacks. Two of the shootings were at spas across the street from each other in northeast Atlanta and the other happened about 30 miles away in Cherokee County to the northwest of the city.

"Video footage from our Video Integration Center places the Cherokee County suspect's vehicle in the area, around the time of our Piedmont Road shootings," the Atlanta Police Department said in a news release. "That, along with video evidence viewed by investigators, suggests it is extremely likely our suspect is the same as Cherokee County's, who is in custody. Because of this, an investigator from APD is in Cherokee County and we are working closely with them to confirm with certainty our cases are related."

Officials in each jurisdiction said there were no immediate indications of motive.

The suspect in the Cherokee County shootings was taken into custody in Crisp County, about 150 miles south of Atlanta, around 8:30 p.m. -- about 3 1/2 hours after the killings. The Cherokee County Sheriff's Office identified him as Robert Aaron Long, 21, of Woodstock.

In a video on the Crisp County Sheriff's Department Facebook page, Sheriff Frank Reynolds said the agency and the highway patrol were alerted Long was headed their way. After his vehicle was spotted, a chase ensued on Interstate 75 and a state trooper performed a maneuver that sent the SUV out of control.

"The suspect was taken into custody without incident ... and transported to the Crisp County jail," the official said.

Five people were shot in suburb

Responding deputies found five people with gunshot wounds. Two people were pronounced dead at the scene and three were transported to a hospital, where two died, Baker said.

The massage parlor is about 30 miles from the sites of the Atlanta shootings, which took place about an hour later.

Then there were two more shootings

Atlanta police said they responded to a robbery call at the Gold Massage Spa on Piedmont Road in Atlanta and found three people dead.

While there, police received another call of shots fired directly across the street at the Aroma Therapy Spa, where they found one person dead, Atlanta Police Chief Rodney Bryant said.

The four victims were female and appear to be Asian, Bryant said, adding it was too early to say what their connection was to the spas.

Authorities in Atlanta's Zone 2 said they were increasing patrols around similar businesses.

In New York, members of the police department's critical response command deployed to Asian communities throughout the city in response to the shootings, a spokesman for the NYPD told CNN.

The FBI is assisting law enforcement with the shooting investigations, according to FBI spokesman Kevin Rowson.