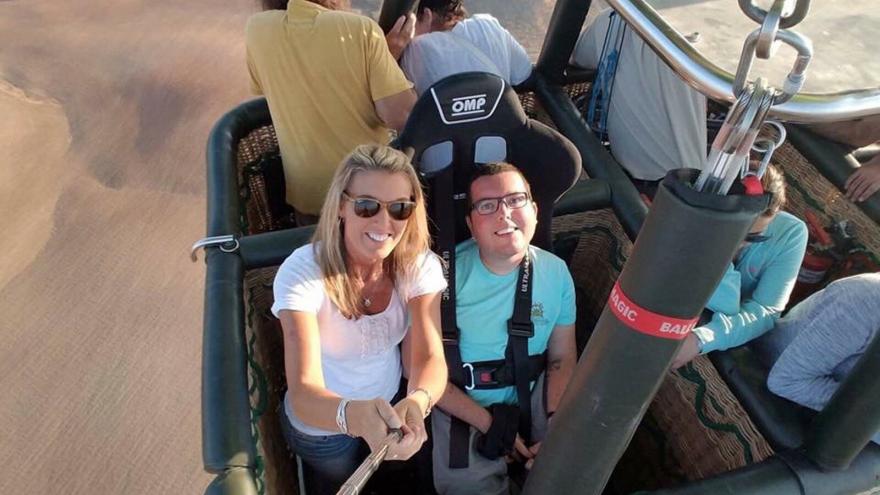 Cory Lee and his mother, Sandy Gilbreath, on a hot air balloon over the Negev Desert, Israel

(CNN) -- Going to Antarctica is a bucket list goal for many, but for Cory Lee, it was that and much more.

Exploring the world on his wheelchair and blogging about it since 2013, Lee visited the White Continent in February -- just before Covid-19 upended travel plans for so many. The trip accomplished Lee's goal of traveling to all 7 continents, a first for a powered wheelchair user, he believes.

"I remember the moment we arrived," Lee told CNN, "I immediately just started crying. It was such an emotional moment for me, because I had worked so long and so hard to get to that point."

The sights in Antarctica "completely blew me away," Lee said. He traveled aboard a cruise ship, after thoroughly researching every detail for two years before departure.

"To finally be there and see the whales, the penguins, the seals and the icebergs was totally surreal."

At the age of two, Lee was diagnosed with spinal muscular atrophy, a form of muscular dystrophy. He started using a wheelchair full-time when he was 4 years old.

In his international adventures, Lee actively seeks out what he calls "thrilling experiences."

He has flown on wheelchair accessible hot air balloons over Las Vegas, and in Israel and Spain. He went ziplining at Gatorland in Orlando, Florida, using a special sling.

In Morocco, Lee rode a camel using a specially designed seat. "It had a full back rest, and it was basically like I was sitting in a chair, but on top of the camel," he explained.

"That was an experience I never thought I would be able to have as a wheelchair user," Lee added. "It was incredible."

Planning trips as a wheelchair user requires a lot of research, and through his blog "Curb Free with Cory Lee," he has been sharing his tips on what to look for and where to go to have the best time.

He starts researching each trip six to 12 months in advance, looking for accessible transportation options and attractions, and calling hotels or rental homes ahead of time to request pictures and verify that they are truly accessible to him, something he recommends others do too.

In his early traveling days, Lee said he would arrive in hotels that promised to have accessible rooms, only to find that yes, he could take an elevator to the room, but his wheelchair couldn't fit in the doorway.

"The word accessible means something different to every person just depending on your own individual needs. So, If you really want it to be accessible for you, then you really have to ask all the questions," Lee said.

Most and least accessible places

Lee says that even from the time he started blogging 7 years ago, there have been huge improvements in accessible options for disabled travelers around the world. Some destinations are ahead of the curve.

"Places like Finland, Sweden, Denmark and Iceland, those are some I keep going back to time and time again because they are so accessible," Lee said. "The people are incredibly friendly, the food is good, and it's easy to get around with a wheelchair."

Sydney, Australia gets the cake for most accessible city in Lee's experience.

He visited Sydney in 2014. "It was really the first time that I'd ever traveled somewhere and felt completely independent," Lee said. Getting on ferries, buses or taxis as a wheelchair user was very easy, and Lee was able to eat in any restaurant without issues.

"I really never had to worry about accessibility," he added.

His most challenging trip was to a city beloved by so many: Paris, France.

"I tried to use the Metro and it was not accessible at all. So, I finally found a wheelchair accessible taxi, but it was 650 euros per day," Lee said.

Accessible transportation is a crucial part of being able to plan a successful trip: "If they don't have wheelchair accessible taxis or public transportation, then I'm pretty much just stuck at the airport," Lee told CNN.

Even before arriving at a destination, the hardest part of traveling as a wheelchair user is still taking a plane, Lee said.

He has to be lifted out of his wheelchair and into airplane seats, and once seated, it's difficult for him to access the bathroom.

"The flying process really still has a long way to go to be truly inclusive," Lee told CNN.

"I hope that one day I can just roll on a plane with my wheelchair and stay in my own wheelchair throughout a flight. That would be my ultimate dream, and it would enable me to travel even more than I do now," he added.

Can flying be more inclusive?

For the travel industry, those missed opportunities translate to dollars not earned.

Open Doors Organization, a non-profit focused on improving accessibility for disabled consumers in travel and tourism, has been collecting data on the disability travel market since 2002. That market is fast growing, according to ODO's Director of Programs Laurel Van Horn, considering the American population is aging rapidly. Also, according to census data, nearly 40% of people age 65 and older had at least one disability, and mobility was the most common disability among older Americans.

Yet to be released data gathered by ODO and previewed by CNN shows that 38% of adults with disabilities (including physically limiting conditions as well as blindness or deafness) have taken a flight on a trip between 2018 and 2019, spending $11 billion, a $2 billion increase from 2015.

Van Horn told CNN the market could be double the size, as disabled travelers tend to not travel alone.

"What we find is that people travel on average with one other person with them," she explained.

Van Horn says the idea of tie-downs for wheelchairs on planes is being explored, however there are safety challenges to overcome. "There is no consistency in how wheelchairs are constructed, or how strong they are," Van Horn explained.

Defining details like fares, wheelchair placement on the plane, and how many seats to eliminate, could also be an uphill battle. "It's a regulatory negotiation process, whatever you're doing still has to be financially viable for the industry," Van Horn explained.

The most urgent battle, according to Van Horn, is for more accessible lavatories on planes, especially on single-aisle planes that are now used to cover much longer distances than in the past.

"People have to simply not drink any water, they dehydrate themselves in order to fly," Van Horn added.

Lee's advice for new travelers is to start small and local, something that has gained more popularity now that the pandemic makes long distance trips that much more difficult.

"When they think of travel, a lot of people think of going to these faraway places, but really travel can be anywhere that you are -- it's a state of mind," Lee said.

He recommends staycations or local getaways. "You can still have a really phenomenal time and even explore some new places in your own hometown," he added.

"Travel locally and domestically to figure out everything that goes into traveling with a wheelchair," Lee advised. "Once you start building more confidence with travel, you can go much farther."

During the pandemic, Lee has been doing road trips and staying in rental homes and cabins to observe social distancing. "I'm really focusing more on outdoor experiences, national parks and beaches."

Now that he has visited all 7 continents, visiting all the National Parks in the US is Lee's new "life goal." Other items on his bucket list include going snow skiing, eating pizza in Italy, seeing the Great Wall of China, and attending the Paralympics.

Lee credits his mother, Sandy Gilbreath, for instilling in him the passion for travel.

Raising him as a single parent, she still took him on local trips throughout his childhood and is now a frequent travel companion on Lee's international adventures -- she was with him on the journey to Antarctica.

Her influence was instrumental in pushing Lee out of his comfort zone.

"Growing up she always told me, 'if you can't stand up, stand out'," Lee said. "So that's why I think I seem to set a lot of big goals and try to go after my dreams so much. It's just because I really want to stand out the most that I can, and hopefully inspire other people."

To do so, Lee and his mother wrote a children's book, "Let's Explore With Cor Cor," about a kid exploring the world on his wheelchair. He hopes the character of Cor Cor will fill in a gap in representation for children with disabilities, something he felt throughout his childhood.

The book was published on July 26, the anniversary of the passing of the Americans with Disabilities Act in 1990, a civil rights law that prohibits discrimination against people with disabilities in a wide range of areas, including employment, public transportation and accommodations, access to government programs and services, and much more.

"That was also the year that I was born," Lee said. He feels fortunate to have grown up after the ADA was enacted, and had he been born earlier, "I wouldn't have experienced as much accessibility as I've been able to over the past 30 years," Lee added.