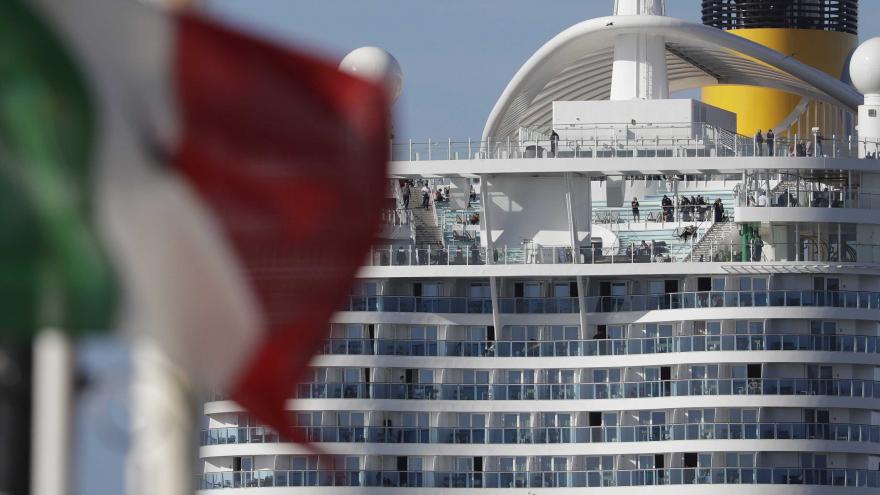 (CNN) -- Seven thousand people are being confined to a cruise ship docked in Italy as a couple is being tested for the Wuhan coronavirus, while Russia is closing off its border with China to stem the spread of the outbreak.

Fears are growing that the virus, which originated in the Chinese city of Wuhan in December and has since spread to 20 other countries and territories, could spread even further. The number of cases in mainland China shot up by 30% in just a day, reaching more than 7,700.

More than 100 people have been infected outside mainland China in places across Asia, North America, Europe and the Middle East, with India and the Philippines the latest to confirm the virus had reached their shores. Most concerning, instances of human-to-human transmission have been reported overseas, including in Germany, the first such case in Europe.

In Italy, meanwhile, the Costa Smeralda crusie ship is now docked at Civitavecchia port, a coastal town northwest of Rome. It had arrived from Palma de Majorca, Spain, as part of its tour of the western Mediterranean.

A spokesperson for Costa Cruises told CNN that a 54-year-old woman aboard the cruise ship was suffering from a fever and that she and her husband were both being tested for the virus. Six thousand people on board are passengers and around another thousand are crew members.

"All the other passengers are, at the moment remaining on board," the spokesperson said. Italian news agency ANSA and public broadcaster RAI reported that the woman and her husband were from Hong Kong and were being kept separately in solitary confinement in the hospital section of the cruiseliner. The passengers and crew will be held until the woman and her husband both test negative to the virus.

The couple is expected to receive results Thursday afternoon, ANSA reports. They are said to have arrived in Italy on January 25 at Milan's Malpensa airport from Macau.

As the number of confirmed cases of the Wuhan coronavirus continues to grow worldwide, the city at the heart of the outbreak marks a week since it was first placed under lockdown.

All 31 provinces and regions within China have now reported cases of the virus, including Tibet, which had instituted strict checks on travelers and shutdown tourist sites in an ultimately unsuccessful attempt to stop its spread to the region.

The World Health Organization (WHO) will meet again on Thursday to decide whether to declare the virus a global health emergency, something it has so far refrained from doing, despite widespread criticism.

Meanwhile, Russian state media reported Thursday that Prime Minister Mikhail Mishustin had signed an order to close Russia's border with China in the Far East in an effort to prevent the spread of the virus.

"An order has been signed today, it is in the works. Today we will inform everyone accordingly about the relevant measures to close the border in the Far Eastern region and other measures that have been taken by the government," Mishustin said, RIA reports.

Russia will also limit its railway service with China from Friday, TASS reported.

In Hong Kong, where 10 cases have been confirmed, the government has closed a high-speed rail station that would usually connect the city to China's mainland.

A CNN correspondent in Hong Kong spoke to people who had lined up for more than three hours to collect surgical face masks to help keep them safe from the virus.

Several countries, including the United States, Japan and some in the European Union, are evacuating their citizens from Wuhan.

Multiple major air carriers are also canceling flights to and from parts of China, including British Airways, American Airlines, Air Canada, KLM, Lufthansa and United. The moves follow travel guidance from multiple governments advising against "nonessential" travel to the country.

The semi-autonomous Chinese city of Hong Kong has introduced new limits it says will cut the amount of mainland Chinese travelers coming to the city by 80%.

Across Asia and elsewhere, strict checks and screening have been put in place for all travelers arriving from China -- though this may be ineffective as scientists previously warned that the virus can be spread while patients are asymptomatic.

Some 60 million people across Hubei, the province of which Wuhan is the capital, are on some level of lockdown, and many travelers from the region have been ordered to self-quarantine, holed up in their apartments or hotel rooms for days on end.

In Wuhan itself, 11 million people are marking a week on lockdown with no sign of immediate relief. Nor is there firm evidence that their sacrifice has been worth it, with the virus spreading around the country and scientists warning that other major cities could soon become self-sustaining epidemics.

Online, people trapped in their houses have been uploading videos and photos showing various ways they are staying busy -- staging makeshift Lunar New Year lion dances in their apartments, exercising, and urging others to keep their spirits up. But as the lockdown stretches on, such positivity may be harder to come by, particularly as some begin to feel the lost wages or business.

Chinese President Xi Jinping on Wednesday ordered the People's Liberation Army to aid in "winning the battle against the novel coronavirus epidemic." Military medical teams have already been sent to Wuhan and soldiers are also aiding with transporting supplies to the stricken city.

Outside of Hubei, infections are predicted to continue growing for weeks, if not months. Researchers at Imperial College London have estimated that at least 4,000 people were infected in Wuhan by January 18, almost a week before the lockdown began. Their model suggests a low national figure of 20,000 infections by the end of the month, potentially as high as 100,000.

Speaking to state media Tuesday, Zhong Nanshan, one of China's leading respiratory experts and a hero of the 2003 fight against SARS, said he expected the peak to come in up to 10 days.

"It is very difficult to definitely estimate when the outbreak reaches its peak. But I think in one week or about 10 days, it will reach the climax and then there will be no large-scale increases," Zhong said.