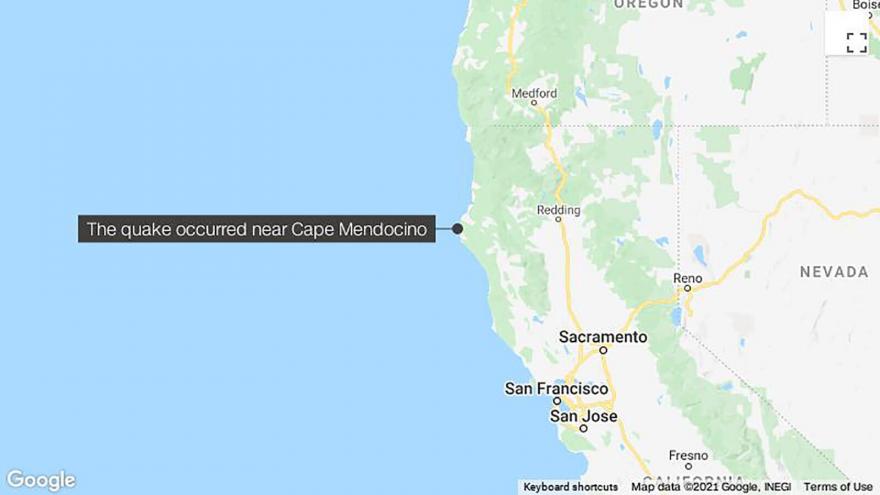 A 6.2 magnitude earthquake off the coast of Northern California rattled a wide swath of the state shortly after noon local time, according to data from the US Geological Survey.

(CNN) -- A 6.2 magnitude earthquake off the coast of Northern California rattled a wide swath of the state shortly after noon local time, according to data from the US Geological Survey.

The quake occurred just off Cape Mendocino near Humboldt County and was felt as far away as San Francisco and Chico, California.

"It was slow rolling at first, but then it really got going," Humboldt County Sheriff William Honsal tells CNN. "We haven't had a shake like this since 2010."

Humboldt County emergency responders are assessing damage but have had no word of injuries or catastrophic damage. Some minor damage to buildings, including broken glass, has been found, Honsal said.

Photos from a small grocery store in Ferndale, just north of the quake's epicenter, showed broken wine bottles and fallen bread, cereal and other items in the aisles.

"We have a lot of mess," store owner Rangeet Singh told CNN, estimating the damage at $15,000.

Most of the dry goods can be salvaged, but not the wine. Many of the broken bottles were expensive wines and champagnes in stock for the holidays.

Singh was surprised by the duration of the shaking. "I never felt one that long before," he said. None of his nine employees was hurt.

California's early earthquake warning system worked for those who are signed up for alerts to their mobile devices. Honsal said he received the alert about 10-15 seconds before feeling the earth shake.

The state's Office of Emergency Services is "actively monitoring" and "coordinating closely with local partners in the region to protect communities from any secondary impacts," the agency tweeted.

Humboldt County is sparsely populated, with about 135,000 residents spread over about 4,000 square miles. The area is near the California/Oregon border, about 270 miles north of San Francisco.

Several aftershocks have been detected, but a tsunami is not expected, according to the sheriff's office.