60 years after the Bay of Pigs invasion, many Cuban Americans' distrust of the Democratic Party still affects national politics 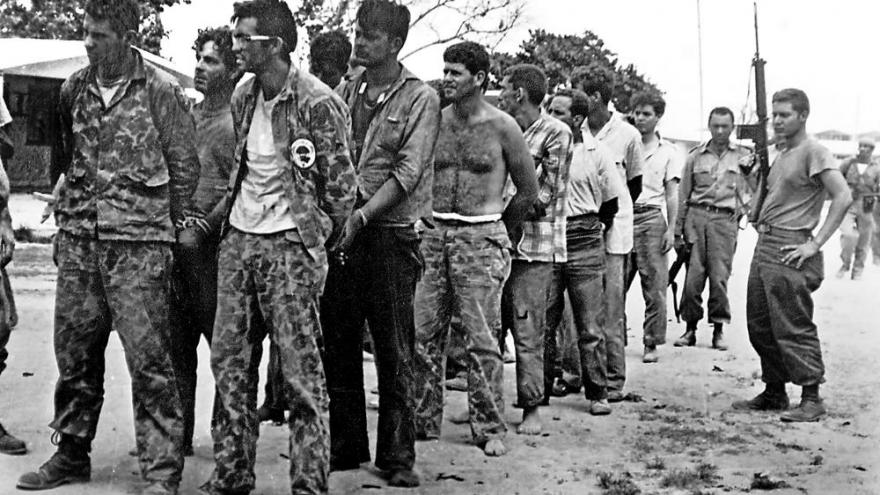 This April 1961 file photo shows a group of Cuban counter-revolutionaries, members of Assault Brigade 2506, after their capture in the Bay of Pigs, Cuba.

(CNN) -- For many, it is a historical footnote. A bit of trivia from a bygone era. A failed Cold War operation known as one of the biggest blunders in the history of US intelligence operations.

But for those who stormed a small stretch of Cuban coastline on April 17, 1961, the failed Bay of Pigs invasion was a turning point in the fight against an oppressive communist dictatorship -- one that, some argue, still carries an outsized impact on national elections in the United States, even 60 years later.

"Today, we're still hopeful that we can bring freedom to the people in Cuba," said Johnny Lopez de la Cruz, a retired US Army Colonel and president of the Bay of Pigs Veterans Association. "We cannot really rest until we see that situation taken care of."

"Even though I was young, I could realize something was wrong," said Lopez de la Cruz, who says that watching an innocent friend get killed before a firing squad without due process led him to act.

"I was sick, I couldn't believe it ... and immediately, you know, I started looking for a place to start working against the government."

That effort led him to Brigade 2506, a group of roughly 1,500 Cuban exiles, armed and trained by the CIA at camps in Florida and Guatemala.

"It was an answer to our situation, providing us tools to fight," said Pedro Roig, who joined the Brigade without knowing what the CIA was, having been recruited by friends on the island.

The Brigade was a cross-section of Cuban society, the veterans say, with doctors and engineers training alongside farmers and fishermen.

"They were Black, White ... It was a mixture of everything," Lopez de la Cruz said, pointing out that many were also students in their teens.

"I was just a kid," said Roberto Heros, who was 17 when his parents urged him to leave Cuba out of fear he'd be imprisoned or executed after a fistfight with a pro-Castro group. "The next morning, my parents said, 'You're out of here.'"

After a few months of training, the operation was underway.

"Everybody was very excited, and I was singing patriotic songs," recalls Lopez de la Cruz, who along with Heros, were paratroopers assigned to land on the island from the air. "I was just desperate to jump.

"Clearly all of us knew that we could get killed or get injured. But frankly, the thought that never passed through my mind is that we could lose," said Heros. "I was convinced that we were going to win."

But almost immediately, they say, there were signs the operation would fail.

Upon landing, Heros says the first thing he remembers seeing was a fellow brigade paratrooper, shot before reaching the ground.

"The first thing I saw was him hanging from a tree, having been killed."

"There was not a minute in which we didn't have some type of action going on," said Lopez de la Cruz, who said the brigade had some initial success against Castro's forces, but could not sustain their gains. "We actually ran out of ammunition."

According to Lopez de la Cruz, who would later serve in the US armed forces, numerous tactical changes to the original plan of attack and an overall lack of commitment from the US government doomed the operation.

Under a plan originally devised by the Eisenhower administration, the United States promised to help Brigade 2506 with air support once the operation was underway. But after three days of intense fighting, help never came.

Then-President John F. Kennedy canceled the planned strike, leaving the brigade to be crushed and captured.

"I guess Kennedy wasn't really sure what he wanted to do -- and that brought us a consequence," said Lopez de la Cruz, who says he doesn't blame anyone for the loss, adding that he doesn't know what kind of intelligence and other foreign policy considerations the administration was facing at the time.

Heros added that "many of us, at the time, blamed President Kennedy -- I myself do not."

After more than a year imprisoned by Castro, sympathizers in the United States eventually negotiated their release to Miami, where Kennedy hosted a "Welcome Back" ceremony for the captured fighters.

"The mention of Kennedy's name is considered a betrayal for Cubans," said Eduardo Celorio, a Cuban-American and avid domino player on Calle Ocho. "That's why Cubans started moving to the Republican Party."

"A great many politicians, especially Republicans, found a way to weaponize the 'C-word:' Communism."

Corben's latest film, "537 Votes" looks at how the political leanings of Cuban-Americans in Miami has altered national elections. He says the scars of communism have primed not only Cubans, but Venezuelans, Nicaraguans and other groups that have grappled with leftist regimes for a very specific message from the GOP: Democrats can't be trusted.

"There is a way that Democrats can speak to that constituency, but yet they fail to," Corben said. "And in that vacuum comes constant reminders of the trauma."

Corben points to former President Donald Trump as a perfect example of a candidate striking an emotional chord with those fleeing oppression by connecting Democrats to their oppressors.

"Those tactics and strategies are now used by Republicans all over the country," Corben says.

Despite hosting political candidates for decades, the Bay of Pigs veterans made Trump their first presidential endorsement in 55 years. Notably, Trump first visited members of the brigade when initially contemplating a bid for the White House in 1999 and then sought and gained their endorsement during his 2016 run.

During his 1999 visit with the brigade veterans, Trump called for a continuation of the embargo with Cuba, called Castro a "killer" and "criminal," and said then that ending the embargo would mean those who were part of the invasion including "all the people who died or were injured and those who are living monuments of it will be hurt by this government a second time," according to a Miami Herald article covering the visit.

In September 2020, the veterans visited the White House, thanking Trump for installing sanctions and reversing Obama-era policies on Cuba.

"You have kept your promises," Lopez de la Cruz said to Trump during a speech in the East Room.

Trump's approach paid off in the Sunshine State. In one of the biggest swings toward Trump in the country during the last election, the former president grew his share of the vote in Miami-Dade County by more than 12 points.

"We are just people that want the best for Cuba ... We are conservative and anything that smells like socialism or communism, we're going to reject," Lopez de la Cruz said of the group's Trump endorsement. He says the veterans were dismayed by Barack Obama's opening to the island, which he says has not produced tangible steps toward democracy.

Democratic Sen. Bob Menendez, the son of Cuban exiles, said the failure of the Bay of Pigs still impacts the political landscape.

"I think it began to create a foundation, particularly among older Cubans, of a belief that the Democratic Party had ultimately turned their back on them in a critical moment in history," said Menendez, who argues that many of the policies that helped welcome the exile community into the United States were passed by Democrats. While he admits the GOP's rhetoric has worked, he says it hasn't changed much on the island.

"Four years of Donald Trump and none of those years changed the reality of Castro's regime and the suffering of the Cuban people ... We're very responsive to the emotional element, but sometimes I wonder, 'Are we looking at what we are actually accomplishing?'"

The New Jersey senator added that dispelling romantic notions about Fidel Castro and the Cuban revolution must be a bipartisan effort.

"I think we all share a universal desire for the Cuban people to be free," Menendez said, adding that the veterans should be regarded as heroes who risked their lives for a noble purpose.

Along with fellow Cuban-American Sen. Marco Rubio, Menendez is co-sponsoring a resolution honoring Brigade 2506 and recommitting the United States to standing against the regime -- which Rubio says should be a bipartisan issue.

"The loudest voices in American politics that have been sympathetic to the Castro regime happened to be members of the Democratic Party," said Rubio of Florida, though he says that there are notable exceptions pushing for change, like Menendez. Rubio also admits there are even those within his own party that he believes are misguided on Cuba policy.

Rubio argues that right-wing sentiments among Cuban-Americans were solidified by policies installed long after the Bay of Pigs, adding that the Biden administration now has a chance to advance the cause that Veterans of Brigade 2506 are still fighting for.

"To me, that ultimately is what will be the defeat of the Castro regime," says Rubio, of the Brigade 2506's dedication. "These men never gave up on the cause and that's the reason why it's still alive today."

"A month doesn't go by since I don't have a very vivid dream of my being in Cuba, the Cuba that I remember, the beautiful country," said Roberto Heros.

None of the three veterans CNN spoke with have ever returned to Cuba, because according to Pedro Roig, their mission remains unchanged.

"Sixty years later, we are still fighting for freedom."