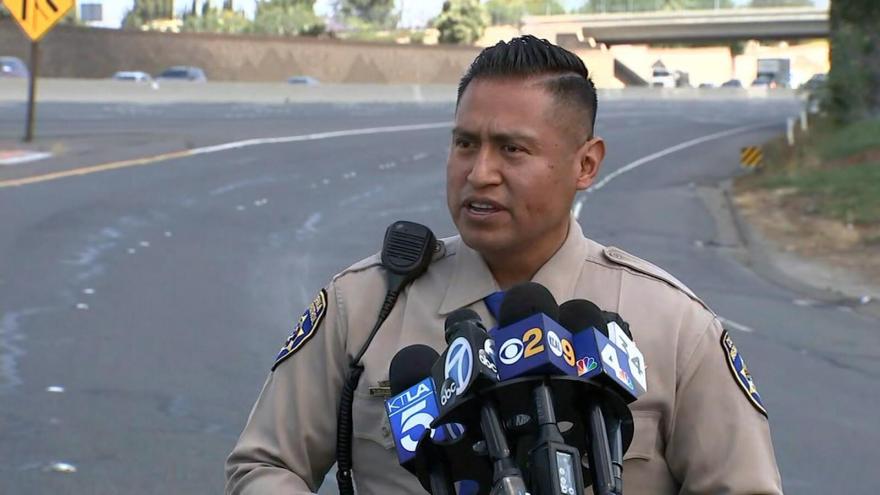 A 6-year-old boy was fatally shot Friday in a suspected road rage incident while sitting inside a car being driven by his mother. California Highway Patrol Officer Florentino Olivera answers questions from the news media about the road rage shooting that happened on the 55 Freeway in Orange County on Friday, May 21.

(CNN) -- A 6-year-old boy was fatally shot Friday in a suspected road rage incident while sitting inside a car being driven by his mother in Orange County, according to the California Highway Patrol.

The child was sitting in a booster seat in the back seat of the car traveling northbound on the 55 Freeway, said CHP Officer Florentino Olivera at a news conference on Friday. The boy was transported to a local hospital, where he was pronounced dead, Olivera said.

Authorities are looking for a white sedan and are asking for the public's help in locating it. Olivera said police are interested in talking to anyone who was driving northbound on the 55 Freeway between Chapman Avenue and the 22 Freeway from 7:55 to 8:15 a.m., especially if their car has a dash camera.

"If you were driving by, you saw something that was not right, call it in," Olivera said. "Even if it wasn't something major, call our office. We want to hear from witnesses."

The shooting was an isolated incident, unrelated to a recent string of pellet and BB gun shootings in Riverside and Orange counties, Olivera said.

Police do not know how many shots were fired or what led to the shooting, according to Olivera.

"We don't have the details of what transpired," he said.

The 55 Freeway is shut down while police investigate the incident and Olivera said the freeway would remain closed until Friday evening.