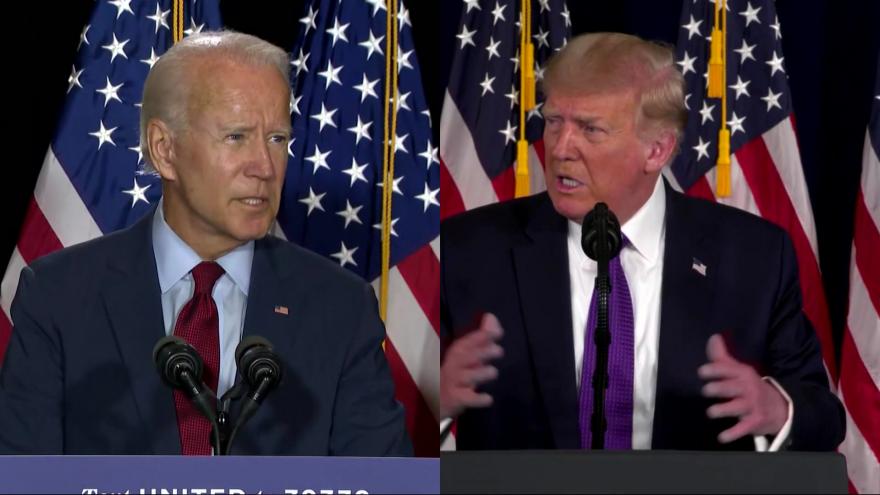 The stage of the first US Presidential debate is seen on September 28, in Cleveland, Ohio

(CNN) -- Donald Trump could face the most direct challenge of his presidency to his handling of the coronavirus pandemic, the economy and his personal conduct in his first debate against Democratic nominee Joe Biden on Tuesday.

Trump and Biden meet tonight in Cleveland for their first of three debates -- a socially distanced affair in which the candidates won't shake hands. Fox News host Chris Wallace is the moderator.

The audience, at about 70, will be limited compared with previous debates, and everyone attending the event at Case Western Reserve University will undergo testing for Covid-19 and follow other health safety protocols.

The debate is set for 9 p.m. Eastern time, and will last 90 minutes without any commercial breaks. The topics for the debate are "The Trump and Biden Records," "The Supreme Court," "Covid-19," "The Economy," "Race and Violence in our Cities" and "The Integrity of the Election," according to the Commission on Presidential Debates.

Each segment will last about 15 minutes, and the candidates will have two minutes to respond after the moderator opens each segment with a question. Wallace will then use the rest of the time in the segment to facilitate further discussion on the topic, according to the commission.

Here are six things to watch in the debate:

On the eve of the debate, Biden got a sizable cudgel to use against Trump.

The New York Times reported on Sunday night that Trump had paid no income taxes in 10 of the 15 years beginning in 2000. And in both the year he won the presidency and his first year in the White House, Trump paid just $750 in federal income taxes, an impossibly low rate.

Biden's campaign quickly jumped on the news, producing a digital ad highlighting how teachers, firefighters and nurses all pay, on average, significantly more in federal income taxes than Trump. And top Democratic operatives believe Biden will use the revelation to attack the President during the debate.

The story is a gift for Biden, whose campaign has been running on populist rhetoric that casts Trump as out of touch with average Americans. The strategy is highlighted by Biden's recent attempts to frame the campaign as "Scranton vs. Park Avenue," touting himself as the candidate in touch with working Americans because he was born and raised in Scranton, Pennsylvania, and attended state schools and Trump as out of touch because he is most associated with wealthy midtown Manhattan.

Trump has dismissed the focus on his taxes by both denying The New York Times report, despite the newspaper having the tax returns, and arguing that most people don't care about the issue. That tactic will be challenged on Tuesday.

Trump and his campaign spent months and millions of advertising dollars casting Biden as senile -- seizing on every verbal stumble, often with misleading or out-of-context videos -- in an effort to plant doubt in voters' minds that the 77-year-old former vice president is up for the job, while falsely suggesting that Biden was trying to duck the debates.

The reality, though, is that Biden is a capable debater who held his own in Democratic primary battles as well as the vice presidential debates of 2008 and 2012.

Seemingly late to grasp the likelihood that setting such low expectations for Biden could backfire, the President in recent days pivoted to a new, baseless theory on Twitter to explain away a potentially strong Biden performance -- one Trump used without evidence against Hillary Clinton in 2016, too: that Biden will take performance-enhancing drugs.

For those following the race through the lens of right-wing media, even an adequate performance by Biden could be stunning. And in the eyes of the older, independent and suburban voters who polls show have shifted away from Trump since 2016, Biden could benefit from the low bar the President has set by merely holding his own.

No single issue has dominated the presidential election more than the coronavirus pandemic. Not only has it forced both campaigns to rethink the way they operate, Trump's handling of Covid-19 has become the dominant issue for Biden.

And Tuesday represents a chance for the former vice president to take those critiques directly to the President.

Biden aides believe that the pandemic is the reason the election polling has remained steady, and the former vice president looks poised to make it a central part of his attack on Tuesday.

Trump repeatedly tells the same story on the virus: He blames China, talks up the increases in testing in the United States and then touts the possibility that a vaccine could be approved soon.

All of those points have significant holes in them for Biden to exploit, and Trump proved at an ABC News town hall earlier this month that he struggles to answer direct questions about the virus when he leaves the confines of Fox News and other friendly conservative outlets.

Republicans' decision to press forward with a Supreme Court confirmation just weeks before the presidential election -- ignoring the principle they created four years earlier, when they refused to consider then-President Barack Obama's nominee nine months before the election -- is all but certain to be a flashpoint Tuesday night.

If Trump nominee Amy Coney Barrett is confirmed, conservatives would hold a 6-3 court majority. The Trump administration is seeking in court to throw out Obama's Affordable Care Act -- a move that would fulfill Trump's long-standing promise to end Obamacare, but would also gut protections for those with preexisting conditions and slash coverage for lower-income individuals. A 6-3 court could also overturn Roe v. Wade, the landmark 1973 decision that legalized abortion nationwide.

Democrats, including Biden, have homed in on health care in the battle over the Supreme Court. And while Trump has tried to insulate himself by signing an executive order saying that protections for those with preexisting conditions would remain in place, that order is toothless, and neither he nor Republicans have put forth new legislation to mandate those protections.

Trump, meanwhile, successfully used the promise of conservative judges to motivate Republican voters in 2016 and could seek to do so again this year -- when he'll likely need a stronger turnout among base GOP voters to win reelection.

Trump has been a boon to the fact-checking industry. But on Tuesday night, it remains an open question who will be fact-checking any falsehoods uttered onstage.

Fact-checking is a key component of any debate, because those who are watching might have only the information presented in the moment -- and might not separately seek out more details later.

Frank J. Fahrenkopf Jr., co-chair of the Commission on Presidential Debates, told CNN on Sunday that they don't "expect" any of the moderators to fact-check Trump or Biden in the moment.

"The minute the TV is off there will be plenty of fact checkers," said Fahrenkopf.

And a Biden aide with knowledge of the debate process told CNN that the former vice president doesn't intend to fact-check Trump's falsehoods, even if the President routinely pivots to them. That, the aide said, is the job of the moderator.

Some Democratic strategists believe it is foolish for Biden to get bogged down in fact-checking Trump.

"The best way to deal with Trump ... won't be to try to fact-check him in real time or to let lies and absurdities go in the hope that moderators -- or viewers -- catch them," wrote Philippe Reines, a former aide to Hillary Clinton who played Trump during her 2016 debate prep.

Instead, wrote Reines, Biden should preempt the President early in the debate by noting that he frequently tells lies.

A pivotal section on race

The section on race pits each candidate's core arguments against the other's.

Biden has said since he launched his campaign that Trump's failure to condemn white supremacists who marched in Charlottesville, Virginia, in 2017 is what motivated him to run for president this year. His argument that the "soul of the nation" is at stake is based in part on Trump's racist comments and actions, which Biden has said embolden white supremacists across the country.

Though he has condemned violence, property damage and looting, Biden has broadly supported protests against racial injustice and police brutality, and has met with the families of George Floyd, who was killed by police in Minneapolis, and Jacob Blake, who was shot in the back by police in Kenosha, Wisconsin.

Trump, meanwhile, devoted much of the Republican National Convention to condemning the property damage and looting that have taken place along with largely peaceful protests in some cities, and to promising a crackdown. He has warned that electing Biden would lead to more chaos. His objective is to frighten suburbanites who have drifted toward Democrats since he took office -- and while similar tactics failed for Trump and the GOP in 2017 and 2018, he is on the ballot this year, unlike those elections.