6 takeaways from the DNC's first night 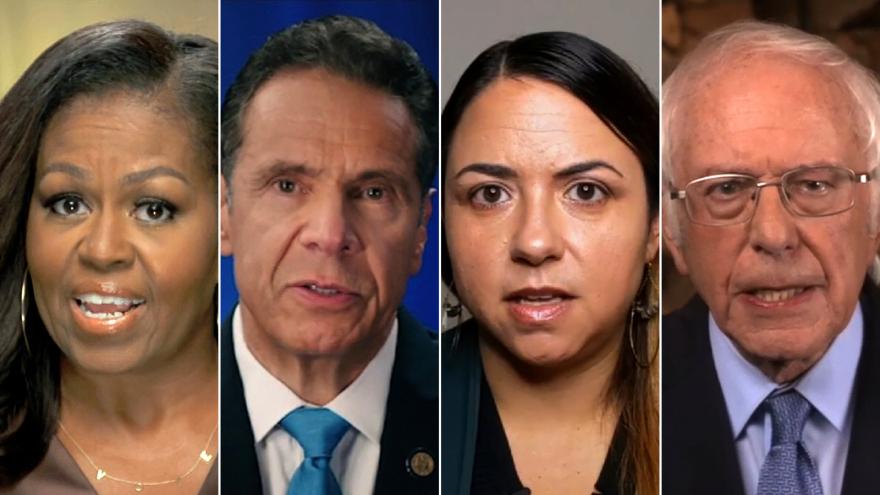 Michelle Obama closed the first night of an unprecedented Democratic convention with a powerful, direct-to-camera excoriation of Donald Trump's presidency that could reverberate through the rest of the 2020 campaign.

(CNN) -- Michelle Obama closed the first night of an unprecedented Democratic convention with a powerful, direct-to-camera excoriation of Donald Trump's presidency that could reverberate through the rest of the 2020 campaign.

The coronavirus pandemic forced Democrats to turn their plans for a four-day party in Milwaukee into a two-hour-a-night event made for TV that's being broadcast this week from studios across the country.

The night started slowly, highlighting individual Americans across the country hurt by the pandemic and Trump's politics and policies. It included interludes designed to highlight the character of the party's choice to take on Trump, former Vice President Joe Biden -- such as a short panel discussion led by Biden on racial justice and a video of his relationships with Amtrak workers.

In speeches, Democrats (and a handful of Republicans) criticized Trump's handling of the pandemic and lambasted his efforts to undercut by-mail voting. Family members of people who were killed by police or died of coronavirus were featured. Vermont Sen. Bernie Sanders, Biden's strongest primary rival, called for Democratic unity in November's general election.

And then Obama captured the evening with a memorable speech made more effective by its setting.

Here are six takeaways from the first night of the Democratic National Convention:

Obama excoriated Trump for what she called "a total and utter lack of empathy" in the most important speech of Monday night's program.

Her role was clear: The former first lady got nearly 19 minutes -- the longest speaking slot of the night, by far -- to tear into Trump's character.

"I know that regardless of our race, age, religion, or politics, when we close out the noise and the fear and truly open our hearts, we know that what's going on in this country is just not right," she said. "This is not who we want to be."

Obama's remarks were a revision of the message she'd electrified Democrats with four years earlier -- "when they go low, we go high," she said then -- for the current political realities of a nation in which a pandemic has killed more than 170,000 people and Trump has fanned racist sentiments amid protests over racial injustice and police violence across America's cities.

She told Democrats that her catchphrase means "unlocking the shackles of lies and mistrust with the only thing that can truly set us free: the cold hard truth."

"So let me be as honest and clear as I possibly can," she said. "Donald Trump is the wrong president for our country. He has had more than enough time to prove that he can do the job, but he is clearly in over his head. He cannot meet this moment. He simply cannot be who we need him to be for us. It is what it is."

She also urged Democrats to turn out in force to vote -- pack a brown bag with dinner and even breakfast and wait in line all night, she told them.

"If you think things cannot possibly get worse, trust me, they can; and they will if we don't make a change in this election," she said.

By his standards, Trump issued a restrained response Tuesday morning.

"Somebody please explain to @MichelleObama that Donald J. Trump would not be here, in the beautiful White House, if it weren't for the job done by your husband, Barack Obama," Trump tweeted.

It started slow. There were small technical glitches -- though no major ones. But overall, Democrats appeared to effectively pull off their first of four nights under extraordinary circumstances.

Perhaps the biggest question is whether people who tuned in for the 9 p.m. ET start of the convention stuck with it through earnest conversations with individual voters and a video montage set to Bruce Springsteen's "The Rising."

The convention's opening night had a distinctly Biden-esque flair -- and it could prove to be much like Biden's Democratic primary campaign: Boring to Twitter-obsessed insiders who were waiting for fireworks, but effective with broader audiences.

'His only pre-existing condition was trusting Donald Trump'

Kristin Urquiza, whose father died after contracting the coronavirus, delivered a line that will echo -- on social media and, likely, political ads -- for the rest of the campaign.

"My dad was a healthy 65-year-old," Urquiza said. "His only pre-existing condition was trusting Donald Trump, and for that he paid with his life."

Urquiza's speech put a human face on the coronavirus crisis. She told the audience that her father died because he "believed (Trump) and his mouthpieces when they said that coronavirus was under control and going to disappear."

The President's mismanagement of the virus loomed over more than just Urquiza's speech, as well.

Michigan Gov. Gretchen Whitmer remembered a 5-year-old girl named Skylar, who died of the virus. And New York Gov. Andrew Cuomo, one of the state leaders at the center of the coronavirus fight, said, "Our nation is in crisis, and in many ways, Covid is just a metaphor."

The focus on the virus highlights how deeply Democrats believe the President's handling of the virus will sink his chances at reelection in November.

Some of the most compelling words spoken on Monday night came from Americans with close personal ties to the twin crises that gripped the country this summer.

Family members of George Floyd, killed by police on Memorial Day in Minneapolis, and the mother of Eric Garner, who died after being placed in a chokehold by a police officer in New York six years ago, both addressed a national audience.

Floyd's brother, Philonise, pleaded with Americans not to let up in their push for racial justice.

"When this moment ends," he said, "let's make sure we never stop saying their names."

Gwen Carr, Garner's mother, called on Biden and other political leaders to face down police violence with greater urgency.

"When my son was murdered, there was a big uprising, but then it settled down," Carr said during a virtual roundtable on criminal justice reform. "We can't let things settle down. We have to go to the politicians. We have to hold their feet to the fire. Otherwise, the big uprising is not going to mean a lot."

Bernie Sanders has run for president twice, given hundreds of speeches and sparked a progressive revival that reshaped Democratic politics. But in making the case for Biden on Monday night, Sanders might have delivered his most poignant argument against Trump -- and in defense of the democracy the Vermont senator said the President now threatens.

"I and my family and many of yours know the insidious way authoritarianism destroys democracy, decency and humanity," Sanders said. "As long as I am here, I will work with progressives, with moderates and, yes, with conservatives to preserve this nation from a threat that so many of our heroes fought and died to defeat."

In appealing to his own supporters -- progressives who are angry or frustrated by Biden's refusal to embrace policies like "Medicare for All" -- Sanders made note of the former vice president's increasingly ambitious climate change plans and warned that his election was key to safeguarding the left's recent gains.

"Many of the ideas we fought for that just a few years ago were considered radical are now mainstream," Sanders said. "But let us be clear. If Donald Trump is reelected, all the progress we have made will be in jeopardy."

Biden said throughout the Democratic primary that he was the best candidate to win over moderate Republicans. On Monday at the Democratic National Convention, former Ohio Gov. John Kasich and a trio of other former top Republicans looked to make that case to millions.

Kasich, in pre-taped remarks delivered at what appeared to be a literal crossroads, told voters who he -- a former Republican executive and 2016 presidential candidate -- was rejecting Trump and backing Biden.

"I'm a lifelong Republican, but that attachment holds second place to my responsibility to my country," said Kasich, who added that even though he is "proud" of his Republican heritage, Trump is a leader who "belies those principles."

Some Democrats question whether including Republicans at the Democratic convention will lead to any voters to cross party lines, especially in a polarized time when moderate Republicans who aren't loyal to Trump are shrinking by the day.

Todd Whitman encapsulated the peculiarity of a quartet of Republicans speaking at the convention: "What am I doing here," she asked, adding later, "This isn't about a Republican or Democrat. This is about a person."