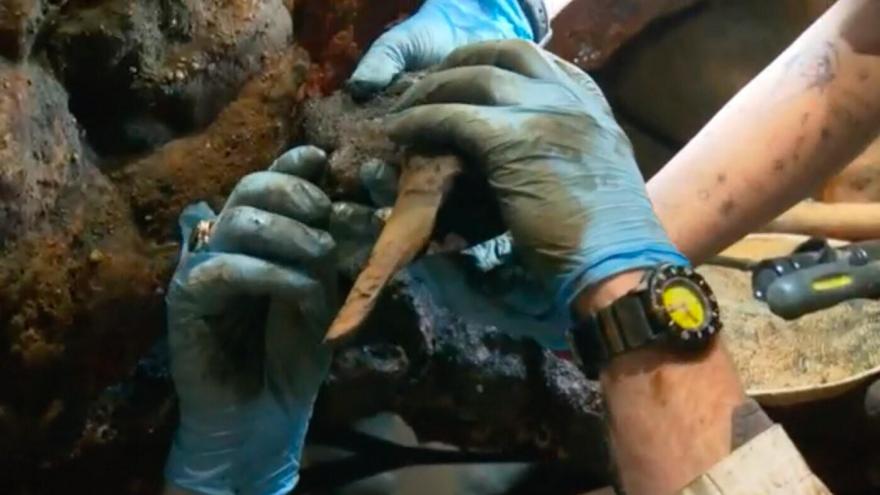 The skeletal remains of at least six pirates were discovered at the site of a shipwreck that happened off Wellfleet in 1717.

(CNN) -- For the pirates of the 18th century, treasure meant gold.

But for the investigators at Whydah Pirate Museum in Cape Cod, Massachusetts, treasure could simply mean big rocks -- as long as there are skeletons tucked inside.

This week, the museum announced that its investigative team had found several concretions off the Massachusetts coast, containing six skeletons.

Some of the remains may belong to the captain of the world's only verified pirate shipwreck, the Whydah, which sank in 1717.

The skeletons are being examined

The recovered concretions -- compacted masses of matter -- are under examination by Barry Clifford, an underwater explorer, and his team of archaeologists, according to the release, obtained by CNN affiliate WBZ and shared with CNN.

Clifford discovered the Whydah Gally, or ship, in 1984, making him the discoverer of the world's only authenticated pirate shipwreck.

The team hopes the skeletons will lead to pirate identifications, Clifford said in the statement -- and maybe to living descendents.

But will they point to Sam Bellamy?

The legend of Whydah's captain, pirate "Black Sam" Bellamy is a love story, and a tragic one.

As legend has it, Bellamy was sailing back to his lover when a storm wiped out his ship, leaving only two survivors, according to the museum's website.

In 2018, a member of Whydah museum's investigative team, Casey Sherman, obtained Bellamy's DNA through a descendant in England and tested it against a bone found at the wreck site.

"That bone was identified as a human male with general ties to the Eastern Mediterranean area," Sherman said in the statement.

Now, with Bellamy's DNA, Sherman said the new remains could finally lead to the captain himself.

Whydah is the world's only verified glimpse into pirate life

Holding thousands of artifacts from the Whydah, the Whydah Pirate Museum is a material look into the lives of pirates -- secretive fleets of men that sailed the seas in the 17th and 18th centuries.

The artifacts point to a pirate culture which may surprise some: One of egalitarianism, racial tolerance and democracy, the Whydah website says.

"... the legendary Samuel 'Black Sam' Bellamy and crew were experimenting in democracy long before the so-called civilized societies had considered such a thing," Clifford said in the statement.

The museum's contents represent over a dozen countries on four continents -- but the skeletons might tell new stories about the men who called the ship home.

The concretions containing the remains are now on display at the Whydah Pirate Museum in West Yarmouth.