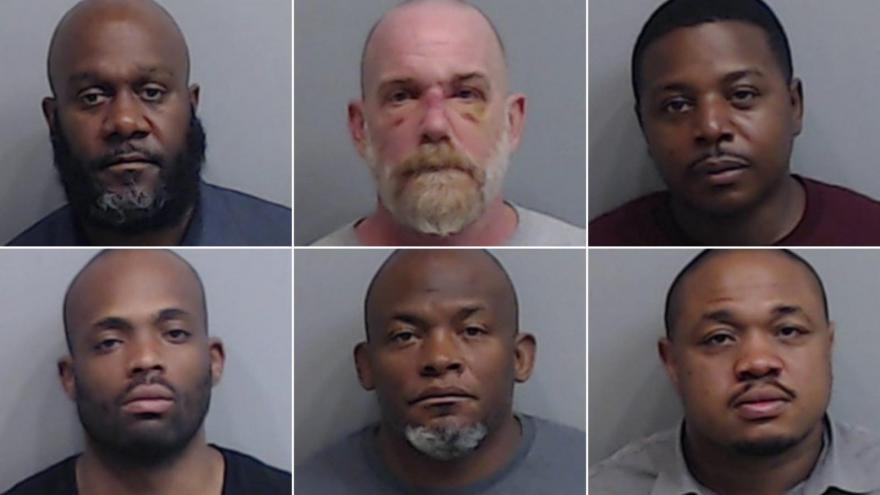 Six Atlanta police officers were booked, five on felony charges after allegations of using excessive force during a protest, according to the sheriff's office.

(CNN) -- Six Atlanta police officers were booked, five on felony charges, Wednesday after allegations of using excessive force during a protest Saturday, according to the sheriff's office.

All six have been released on signature bonds, according to the Fulton County Sheriff's Office.

In a video recording of the incident, the officers are seen breaking windows of a vehicle, pulling a woman out of the car and tasing a man.

The two victims have been identified as students at Spelman and Morehouse, two historically black colleges. They were on their way home from picking up food when they got caught in traffic downtown caused by a protest of police violence against black citizens.

Atlanta Police Chief Erika Shields expressed concern about the charges in an internal memo and indicated she hadn't expected them.

Criminal charges "were never part of any discussion that I had with the Mayor or her administration," Shields wrote in the memo provided to CNN by the deparment. Shields said she found out about them from "a fellow employee."

"I called the DA and strongly expressed my concern, both to the appropriateness and the timing of any charges," Shields wrote.

"The officers were fired because I felt that is what had to occur," Shields wrote. "This does not mean for a moment that I will sit quietly by and watch our employees get swept up in the tsunami of political jockeying during an election year."

The regional director of the police union expressed concern about how quickly the officers were fired and charged.

"We are asking the same thing that we ask, that everybody asks, for citizens," Champion said. "They have their time to have investigations. They were given no due process."

In a police report, one of the officers said that he used his taser because he was unsure whether Pilgrim or Young were armed.

Pilgrim, 20, said she and Young were riding home from protests when the incident took place.

"I thought I might be killed," she told Alisyn Camerota on CNN's "New Day" Wednesday.

"Nothing really warranted it ... After I realized none of this really had a reason, I was just thinking, OK, this is the end."

Young's wrist is injured and he has about 20 stitches in his forearm along with bruises all over his ribs, he said.

In her memo, the police chief said she spent about four hours watching all available video of the incident.

"The more I watched and the more I listened it was apparent we were in the wrong," Shields wrote.

"We gave conflicting instructions; we didn't allow the driver or passenger a chance to respond -- we created chaos and we escalated a low-level encounter into a space where we introduced violence."
Correction: An earlier version of this story incorrectly reported that Taniyah Pilgrim and Messiah Young had taken part in protests before their arrest.