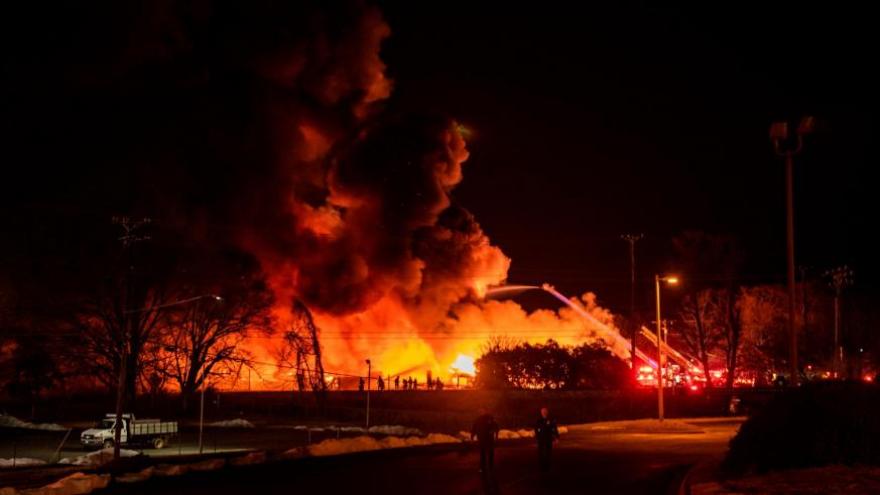 A fire burns Monday at the fertilizer plant in Winston-Salem, North Carolina.

(CNN) -- A fire that erupted Monday night at the Winston Weaver fertilizer plant in Winston-Salem, North Carolina, still poses a threat to the community Wednesday -- and an evacuation radius remains in place, authorities said.

The fire is still burning at the plant and the one-mile evacuation radius that has affected thousands of people is ongoing, Bobby Wade, division chief of the Winston-Salem Fire Department said at a news conference early Wednesday.

"The potential for an explosion is still there, and we have to be patient and just observe and keep those safe distances and those safe zones established until we get to a point where we can re-enter the site and start assessing that," Wade said.

The department said it plans to tweet an update at 11 a.m.

The fire forced emergency responders to urge the evacuation of about 6,000 people, including Wake Forest University students and more than 200 inmates from a nearby prison.

The potential for an ammonium nitrate explosion at the plant was a top concern, fire officials said, as authorities scrambled to evacuate almost 2,500 homes within a mile of the blaze.

"If that doesn't convey the gravity of this situation and how serious folks need to take it, I don't know how else to verbalize that," Mayo said.

Through aerial surveillance, officials have been able to determine that there is no imminent heat threat to the rail car on the back of the facility that contains about 100 tons of ammonium nitrate, according to Mayo.

Officials on Tuesday were able to shut off two lines that were flowing natural gas into the vicinity of the fertilizer plant, the fire chief said.

As the winds begin to shift into the evening, Mayo warned residents that they will be able to see a haze in the air, and they will begin to smell an odor similar to "spent fireworks."

The odor is from irritants and not considered toxic, he said.

Still, people with "sensitive respiratory systems" should avoid being outside, Mayo said.

"We do not encourage folks to be out exercising, running and walking and doing that sort of thing," he said.

At one point, fire trucks were driving down every road in the evacuation zone -- and going door to door in some places -- using a public address system to urge residents to evacuate, Winston-Salem Fire Department Battalion Chief Patrick Grubbs said early Tuesday.

The blaze began Monday night at the plant. After battling it for two hours, the fire department pulled back its crews after the blaze spread to the rail car containing ammonium nitrate, Grubbs said.

"Right now, the fire is still active, and there's still potential for explosion. We're asking all the citizens to evacuate the area for a one-mile radius around it," he said Tuesday morning. "We do not know the full extent of the time we'll be here. It will not be anytime soon that we'll be leaving."

The cause of the fire remains under investigation, Grubbs said, and the fire department has been in touch with the company that owns the plant. The Winston Weaver Co. did not respond immediately to CNN's request for information.

On the City of Winston-Salem Facebook page, a company official said there had been no injuries or loss of life.

"We will continue working with first responders and relevant officials to ensure safety of the community, and we would participate fully in the investigation into the cause of the fire," he said.

The fertilizer plant had passed a routine inspection in December, officials said.

There was no imminent threat to the Forsyth facility, Bull said. Emergency officials recommended moving the prisoners as a precaution. They'll be returned to Forsyth when it's safe, he said.

Wake Forest University canceled classes Tuesday, the university said. The evacuation area includes a unit of on-campus housing, Deacon Place, and students on campus or living outside the 1-mile zone are encouraged to stay indoors and keep their windows closed, the school said. The Wellbeing Center, Benson Center and Z. Smith Reynolds Library are open for faculty, staff or students who need a place to stay.

"Travel in the evacuation area around 4400 North Cherry Street will become increasingly difficult as police begin to shut down roads and prohibit vehicle traffic. Faculty, staff and students are encouraged to evacuate as soon as possible. Use personal vehicles and carpool when possible. Parking anywhere on campus is allowed," Wake Forest said early Tuesday.

At least 90 firefighters and up to about 150 emergency personnel -- including police and others -- have been working on the fire and evacuating the area, Grubbs said.