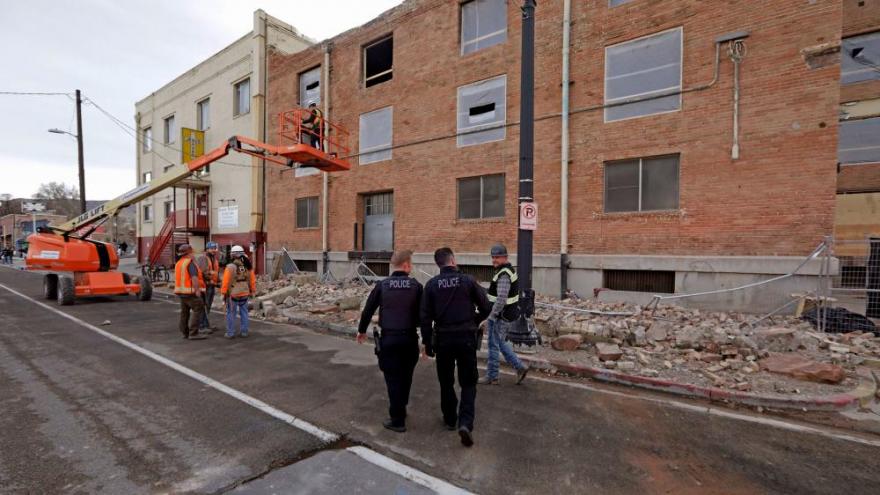 Flights to Salt Lake International Airport were diverted, departures were postponed and terminals and concourses were evacuated so engineers could inspect the facilities, the airport said.

People in downtown Salt Lake City left buildings and gathered outside after the quake, talking about the shaking, CNN affiliate KSL reported.

"It didn't feel like a small earthquake at all. I heard things in my kitchen falling," Michael McCarlie, who lives in an apartment at the City Creek Landing development in the capital, told KSL.

This is the state's most powerful quake since 1992, when a magnitude 5.9 temblor struck the St. George area, Utah's Division of Emergency Management said.

Operations at the state's public health laboratory were halted as the building was assessed for damage, the state Department of Health said.

The state's coronavirus hotline, which residents may call to request tests and seek information, was down after the quake, Gov. Gary Herbert said on Twitter -- though the health department said a temporary information line was available.

The Department of Health said its lab is being assessed for damage, and testing will resume when the building is "determined to be safe."

"There were no samples being tested at the time of the earthquake," the department said in a media advisory posted on Twitter. "Additionally, no samples or laboratory equipment were damaged during the earthquake."

Commercial labs in the state are working and still processing Covid-19 tests, the department said.

By the early afternoon there were about 10,000 customers without power, down from 73,000 immediately after the quake, Rocky Mountain Power reported.

"Please stay away from the downtown area while crews assess damage," Herbert said. "Unless you work in public safety, or are an essential employee, remain at home or telework."

The quake comes as Utah residents, like people across the world, are adjusting to changes brought by the coronavirus pandemic, including canceling schools and limiting mass gatherings.

"I know the last thing we need right now is an earthquake, but here we are, and it sounds like aftershocks are likely," Salt Lake City Mayor Erin Mendenhall said on Twitter.

At the city's iconic Mormon temple, the quake dislodged the trumpet of the angel statue atop its highest spire, video from KSL showed.

"The trumpet on the Angel Moroni statue fell off, and there is minor displacement of some of the temple's smaller spire stones," said Daniel Woodruff, a spokesman for The Church of Jesus Christ of Latter-day Saints.

Aerial photos show the fallen trumpet appeared to have landed on the roof of the temple near the base of its spires.

School districts in the area have been offering grab-and-go lunch pickup programs during the coronavirus break, but some districts canceled those programs Wednesday because of the earthquake, CNN affiliate KTVX reported.

The airport said Wednesday afternoon it was resuming operations after checking for damage.

"The airport has completed the security sweep and is preparing to allow passengers through. ... Flights will begin arriving and departing," the airport posted on Twitter.

A water line that was damaged in Concourse D has been repaired, the airport said.

The first flight left for Dallas just before 3 p.m., the airport said later.

Because fewer people are flying during the coronavirus pandemic, "evacuating the terminal buildings was easier" than it would have normally been, airport director Bill Wyatt told reporters.

The runways and taxiways were not damaged, Wyatt said. Some inbound planes were diverted to Denver or elsewhere, Wyatt said.

The airport said a road to the airport initially was closed after the quake, but eventually was reopened late Wednesday morning so passengers could be picked up.

The Utah Department of Transportation said it didn't appear that the roads it's responsible for were damaged, but workers were checking to make sure. Parts of Interstate 80 were temporarily closed so inspection crews could look at bridges, it said.

Several aftershocks were recorded within 20 minutes of the main quake, according to the USGS, and dozens were recorded later, including one with a 4.6 magnitude Wednesday afternoon.