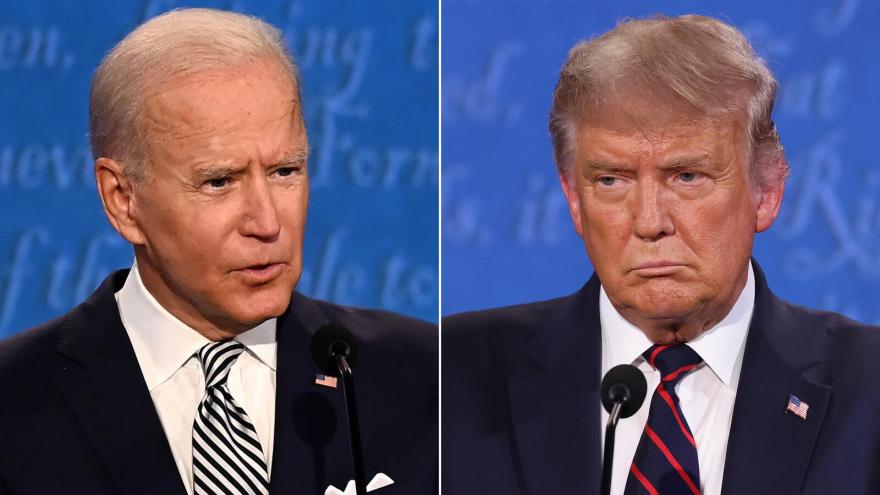 Donald Trummp is trailing Democratic presidential nominee Joe Biden in most national and battleground state polls, making the debate the incumbent's last best chance to change the trajectory of a race that, with less than two weeks to run, appears to favor the challenger.

(CNN) -- Time is running out on President Donald Trump.

He is trailing Democratic presidential nominee Joe Biden in most national and battleground state polls, making Thursday night's debate the incumbent's last best chance to change the trajectory of a race that, with less than two weeks to run, appears to favor the challenger.

After an initial match up that quickly descended into a glorified shouting match, with Trump repeatedly interrupting Biden and running roughshod over the moderator, the second debate, scheduled for last week, was canceled after the President tested positive for the coronavirus and subsequently refused to take part in a virtual meeting.

This time, the Commission on Presidential Debates has given the green light to an in-person face-off, but with one unprecedented change: The candidates will have their microphones cut off while their opponents respond to the first question of each of the debate's six segments.

But that's just where the moderator, NBC's Kristen Welker, will begin. Where the candidates go from there, especially in Trump's case, is the wild card.

Here are five things to watch in the debate:

Will Trump trample over the new rules?

In order to enforce the debate's rule, the commission has resorted to something familiar to a country operating by video conferences: The mute button.

But there are questions over how effective the new guardrails will really be.

Trump's campaign has suggested that length of time will provide Biden with a chance to talk himself into a corner. True or not, past performance suggests Trump lacks the self-control to stand quietly by and find out. If he does try to interrupt, his voice could be picked up by Biden's microphone.

The President's sense of grievance over the changes could also lead him to lash out at Welker. His campaign has already attacked the commission and the President has a history of launching sexist attacks against female debate moderators.

Trump and his allies have been teeing up his plans to attack Welker and the commission by flouting the rules wherever they can. How Trump executes that strategy could provide the voters who haven't already cast a ballot with their last memory of the President before they make a decision.

Coronavirus on the rise

Trump wants to avoid the constant drumbeat of coronavirus news. Surging numbers across the country -- including swing states central to his victory -- make that impossible.

The national surge is significant: Johns Hopkins University found the United States reported over 60,000 new cases on Tuesday and 58,000 on Monday, leading public health experts to refer to this moment as a third surge in infections.

Politically, however, the numbers in swing states are even more dire. Both case and death numbers are on the rise in Wisconsin, Pennsylvania, Ohio, Iowa and Michigan, all swing states central to Trump's reelection. The surges are dominating local news coverage, too, meaning most voters are heading to the polls with frequent reminders of the ongoing pandemic.

That's a problem for Trump. The virus has dominated the 2020 election, forcing both candidates to rethink the way they campaign, especially after Trump himself contracted the virus. But Trump has shown recent signs of deep-seated anger at the focus on the virus, lambasting journalists for covering the pandemic and even abruptly ending an interview with 60 Minutes when many of the questions focused on the virus.

Coronavirus remains the most important issue in the minds of voters. How Trump handles questions about the issue will have significant implications in this election.

Thursday night's debate is effectively the last major hurdle that must be cleared by Biden, a candidate who -- despite his reputation for gaffes, and some minor stumbles along the way -- has largely stuck to the same message since launching his campaign in April 2019.

In the waning weeks of the 2020 race, that's required Biden to finesse his way around some questions about how he'd govern. The most persistent one he's ducked: Whether he would back some progressives' push to add seats to a Supreme Court that could soon see a 6-3 conservative majority.

He has moved those conversations onto safer political ground, focusing on policy questions such as the future of Obamacare's protections for those with pre-existing conditions instead of handing Trump's campaign ammunition to paint Biden as a tool of his party's progressive wing.

By turning in solid performances in debates and interviews, Biden has also avoided any moments that could look -- to an audience of millions of people -- anything like the mental decline that Trump's campaign has baselessly claimed the 77-year-old former vice president faces.

The day-to-day grind of stump speeches and interactions with reporters on the campaign trail that'll follow Thursday night's debate won't be seen by anywhere near the audience that will tune in. If Biden emerges largely unscathed, he'll likely have successfully weathered every key moment with the potential to alter the dynamics of a presidential race polls show he is winning.

In the alternate universe of right-wing media, Biden is currently embroiled in scandal -- most of it focusing on unproven allegations about his son Hunter Biden. There's also a bogus "Obamagate" conspiracy theory that Trump has promoted, despite its underpinnings all having been knocked down in the real world.

None of it seems to have moved voters who aren't already part of Trump's base, and attacking Biden's surviving son could also backfire.

But Trump is sure to try to use it all to attack Biden -- a candidate who has at times flashed a temper.

Will Biden respond aggressively, by pointing out this week's New York Times report that Trump maintains a bank account in China under a corporate name or that his own children and business have benefitted financially from his presidency? Or will he try not to be baited -- demonstrating to voters his eagerness to take the high road, though potentially leaving some of Trump's attacks unanswered?

Who do Trump and Biden direct their closing messages to?

With the beginning of early in-person voting and millions of American casting their ballots by mail, the number of undecided voters still up for grabs is likely much smaller than it was just a few weeks ago.

Even in more conventional circumstances, debates are as much about narrowcasting your message to potential supporters as they are about "winning" the argument on a given issue.

Trump in his recent speeches has made clear that he's perturbed by poll numbers suggesting his support among suburban voters and women is flagging. He'll likely address the dynamic on Thursday night, but his challenge will be to make a coherent and convincing case to those voters -- not, as he's done on the stump, simply complain about the trend or get lost in conspiracy theories.

Biden also has work to do, mainly with Black and Latino voters. They're supporting him by big margins, but not quite to the level that Hillary Clinton or Barack Obama enjoyed. If Biden can energize that traditional base of Democratic support, he will be better-positioned headed into Election Day.

If not, his margin for error becomes that much smaller.