5 things to look for in tonight's vice presidential debate 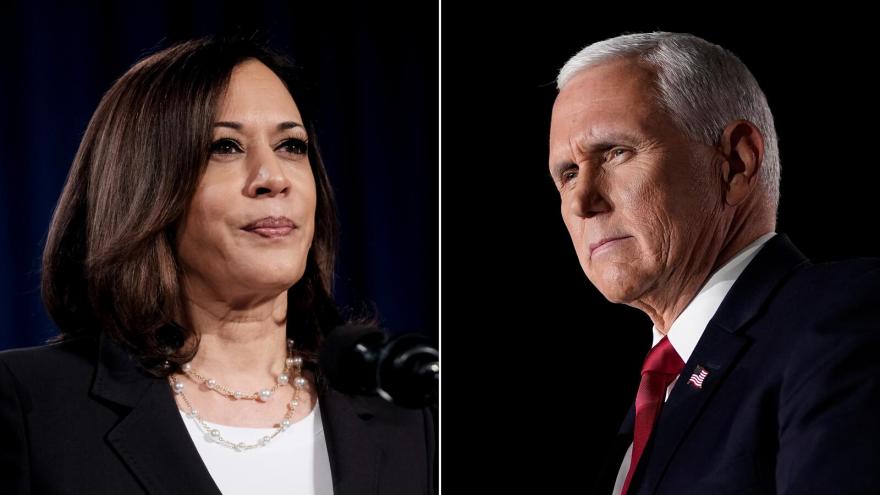 Seated 12 feet apart, Vice President Mike Pence and his Democratic rival, Sen. Kamala Harris of California, will meet in Utah on Oct. 7 for the only vice presidential debate of the campaign.

(CNN) -- Seated 12 feet apart, Vice President Mike Pence and his Democratic rival, Sen. Kamala Harris of California, will meet in Utah at 9 p.m. ET on Wednesday night for the only vice presidential debate of the campaign.

Their showdown comes with the highest stakes for a vice presidential debate in recent memory, in part because President Donald Trump's coronavirus diagnosis has made it unclear if and how additional presidential debates will take place.

It will also mark a historic moment, as Harris becomes the first Black and South Asian woman to participate in a general election presidential campaign debate.

It comes at a chaotic moment in Washington. Coronavirus is spreading rapidly through Trump's White House and among his top campaign allies. And on Tuesday, Trump abruptly halted stimulus talks with House Speaker Nancy Pelosi.

Pence and Harris share tickets with two of the oldest men to run for president -- the 74-year-old Trump and the 77-year-old Democratic nominee, Joe Biden -- putting an extra emphasis on their roles as the second in command.

Here are five things to watch in Wednesday night's debate:

Even before the pandemic is mentioned at Wednesday night's debate, its presence will be obvious.

Debate organizers, in response to the spread of the coronavirus inside the White House and the fact that Pence was at an event that was seemingly the genesis of the White House spread just over a week ago, made a number of changes to their safety protocols, including putting Pence and Harris more than 12 feet apart, using plexiglass as barriers between the candidates and requiring everyone in the audience wear masks.

The coronavirus risks around the debate led some Democrats to question why the contest was even happening, particularly given Pence's proximity to those who have recently tested positive. Jesse Schonau, Pence's physician, said in a memo released Tuesday that the vice president does not need to quarantine because he was not a "close contact" of anyone who has tested positive as defined by the US Centers for Disease Control and Prevention. Pence has had multiple negative coronavirus tests.

But the changes to the format will make a point that Pence, who chairs the administration's coronavirus task force, and the Trump campaign are seeking to avoid: The pandemic has upended nearly every aspect of American life, including the way the country holds political debates.

Pence's team challenged the installation of plexiglass barriers around him at the debate after the commission announced that they would be used, before ultimately agreeing to their installation.

But their resistance highlighted how the Trump campaign wants to avoid the omnipresence of the coronavirus and the worry among some in the President's orbit that it could set a precedent for the forthcoming debates between Trump and Biden.

Trump has tried to cast his Covid diagnosis and supposed recovery as a bonus. In his telling, he's a fearless leader who took on the virus and triumphed -- setting a model for bravery in the face of a pandemic.

He's made no mention of those in his inner circle who've fallen ill, nor the others on the White House staff -- political and nonpartisan professionals -- who are sick now. Empathy for the more than 210,000 Americans to die from the disease, and their families, has also been absent from his public statements.

For Harris, the challenge is to use this massive stage and draw a line -- clear enough for anyone to see and impossible to ignore -- from Trump's handling of the pandemic as President to the growing fiasco inside his administration.

She must do this while the President's own prognosis remains unknown. And even if, as Biden said on Monday night, his infection is largely the result of his own refusal to follow standard safety procedures, personal broadsides against him while he is battling the virus could carry some potential risk.

It has been a chaotic week for the Trump campaign, punctuated by the President himself testing positive for the virus and spending three days in the hospital but beginning with a frenzied debate between the President and Biden.

Pence's goals in Wednesday night's debate are to project a calm that Trump was unable to signal last week, while defending the administration's handling of the pandemic and delivering the Trump campaign's messaging that the virus should not dominate American life.

It's a difficult task: More than 210,000 Americans have died from the virus, small businesses across the country have been decimated and the prospect of more economic stimulus for Americans was rejected on Tuesday evening when the President urged Republicans to walk away from negotiations with Democrats, tanking the stock market.

But Pence, according to people who know him well or have debated him in the past, is one of the most skilled politicians at redirecting a question to a topic he wants to focus on.

"Mike is a good debater," said John Gregg, an Indiana Democrat who went to law school with Pence and ran against him for governor in 2012. "On certain questions that he gets, if he doesn't want to answer it, he is just a master at not answering it and pivoting to talking points."

Harris faces the ghosts of policies past

Harris entered the Democratic presidential primary as a supporter of "Medicare for All," the national health insurance plan written and championed by her competitor Sen. Bernie Sanders of Vermont.

By the time she dropped out, in December 2019, the senator from California had rowed back her support and unveiled her own plan, which called for transitioning to a government-run program over 10 years but allowing private insurers to participate.

Now she is making the case for Biden and his proposal to beef up the Affordable Care Act and create a public option on top of it.

Trump and Pence don't have a credible health care plan of their own, but that won't stop the vice president from trying to paint Harris as a tool of the "radical left" over both her initial backing of Medicare for All and her own proposal. Her ability to pivot out of that conversation and into one about the current administration's policies, both on the pandemic and their support for a lawsuit that threatens the ACA, could be a defining moment.

Trump couldn't get answers from Biden, but Pence might try to press Harris on those questions as he seeks to argue that the Biden-Harris ticket is beholden to the Democratic Party's progressive wing, which has sought the changes.

Pence, meanwhile, could have to address Trump's seesawing tweets Tuesday about an economic stimulus. The President took to Twitter to announce that he had ended negotiations with Pelosi over a massive economic package. Then, hours later, he tweeted "True!" in response to Federal Reserve Chairman Jerome Powell arguing for more financial help from Congress.