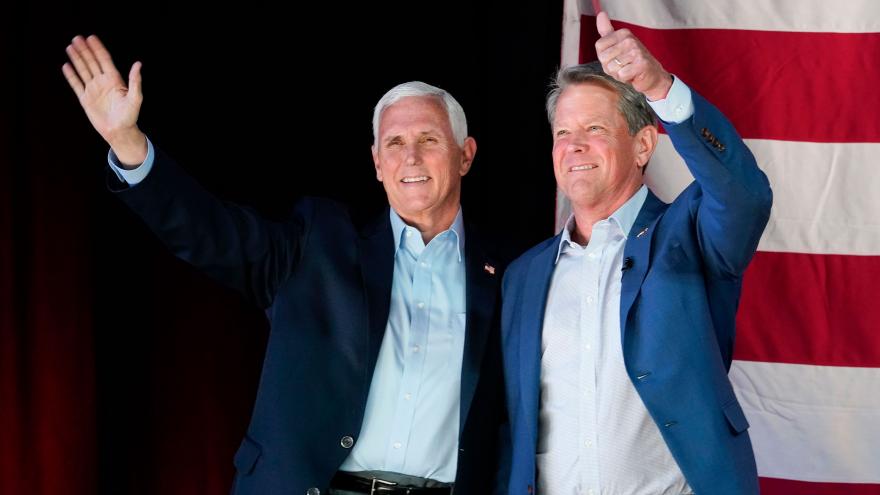 (CNN) -- The salary question during an interview can be a prickly subject for some job seekers. If you get clammy hands when asked about compensation, keep this in mind: Job candidates have more bargaining power now due to rising inflation and the nationwide labor shortage. Plus, experts say there are almost two jobs available for every job seeker -- so, the odds are in your favor.

Primary elections are being held in Alabama, Arkansas, Georgia and Texas today. Many eyes are on Georgia, where former Vice President Mike Pence has been rallying support for Gov. Brian Kemp, the Republican incumbent. Pence appeared at an event for Kemp yesterday -- and it was widely seen as an implicit rebuke of former President Donald Trump, who has endorsed Kemp's primary opponent, former GOP Sen. David Perdue. On the Democratic side, Stacey Abrams is running unopposed, setting up a potential rematch with Kemp following a previous loss to him in 2018. However, since her defeat, Abrams has soared to national prominence and is no longer an underdog with little following outside of Georgia. This comes as early voting has surged to record levels in the Georgia primary, with more than 800,000 ballots cast ahead of today's contests.

President Joe Biden today met with the other leaders of the "Quad" nations -- Japan, India and Australia -- at an in-person summit in Tokyo to discuss the ongoing war in Ukraine and other pressing issues. The leaders talked about their responses to the humanitarian crisis in Ukraine and reiterated their "strong resolve to maintain the peace and stability in the region," according to a joint statement. Meanwhile, Ukrainian officials reported Russian aerial strikes in east-central Ukraine and heavy fighting in the eastern Donetsk region, where Russian forces are trying to advance. New satellite images also appear to show Russian ships loading up with what is believed to be stolen Ukrainian grain. Ukraine's President Volodymyr Zelensky has accused Russia of "gradually stealing" Ukrainian food products and trying to sell them.

Three child-size doses of the Pfizer/BioNTech Covid-19 vaccine appeared to be safe and showed a strong immune response in children ages 6 months to 5 years, the companies announced yesterday. Midtrial results found vaccine efficacy of 80.3% against symptomatic Covid-19 in this young age group. The vaccine makers said they will finish submitting the trial data to the FDA this week. Moderna submitted its vaccine data for children 6 months through 5 years of age to the FDA late last month. The FDA said yesterday that its vaccine committee will similarly convene in June to discuss Moderna's emergency Covid-19 vaccine request.

In response to a global outbreak of monkeypox cases, the US is working to release a vaccine from the nation's Strategic National Stockpile to combat the rare virus. There is one confirmed case of monkeypox and four suspected cases in the US, the CDC said. The confirmed case is in a man in Massachusetts, and the four other suspected cases are in men in New York, Florida and Utah. While anyone can get or spread monkeypox, a "notable fraction of cases" in the latest global outbreak are happening among gay and bisexual men, the CDC said yesterday. As a result, the CDC decided to hold a news conference about the outbreak now because LGBTQ Pride month usually kicks off around Memorial Day weekend, and officials wanted to make sure the community was aware of the situation.

Californians could face mandatory statewide water restrictions this summer unless residents and businesses scale back on their water use, Gov. Gavin Newsom said. California is stretching into its third year of drought and the state's reservoirs are dropping to critically low levels. In July 2021, Newsom announced a drought emergency, calling on residents and businesses to voluntarily cut their water usage by 15%. Yet in March, not only had the target not been met, but urban water usage rose by 19% from March 2020, according to the State Water Resources Control Board. Scientists found earlier this year that the West's current megadrought is the worst in 1,200 years, and the climate crisis has made it 72% worse.

Rodeo bull jumps fence and causes quite a commotion

Congratulations to the 20-year-old country singer from Kentucky whose life just changed forever. Welcome to Hollywood!

Take a moment to bask in the beauty of this priceless tiara, famously worn by Princess Diana during her wedding to Prince Charles in 1981.

Arby's is selling a fast-food staple it's never offered before

You might be surprised to learn that this popular item was never on their menu until now.

Now, that was a close call... Check out the footage from the intense rescue.

That's the number of games New York Yankees third baseman Josh Donaldson was suspended for after making "inappropriate comments" directed toward a Black player, a spokesman for Major League Baseball said. Chicago White Sox shortstop Tim Anderson, who is Black, told reporters Saturday that Donaldson, who is White, called him "Jackie" (Robinson) in a disrespectful way multiple times during the game. "He was trying to call me Jackie Robinson, like 'What's up, Jackie?'" Anderson said. In a locker room interview, Donaldson admitted he called Anderson "Jackie" during the game, but denied any racist intentions.

"We're navigating a dark hour in our shared history."

-- President Joe Biden, referencing the war in Ukraine during opening remarks at the Quad Summit with leaders of Australia, India and Japan. Biden underscored the grave consequences of a war that continues to grind forward, despite withering sanctions from a mostly-united West. He described the conflict as "a global issue" and said the US and its partners will continue to "lead a global response."

This cat was not in the mood... Enjoy this funny 45-second video to start your Tuesday. (Click here to view)