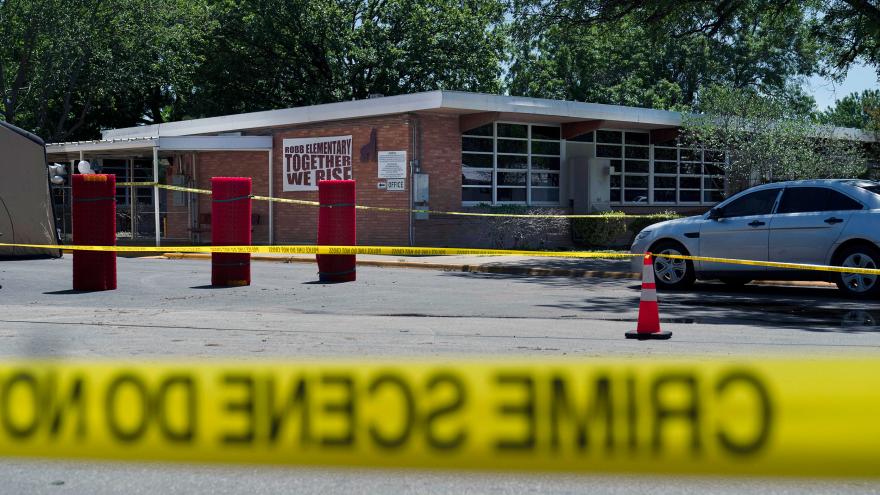 (CNN) -- On this day 42 years ago, CNN made its debut as the first 24-hour news channel. So much has changed over four decades, but one thing remains largely as it was on June 1, 1980 -- those three, unmistakable red and white letters. If you'd like to experience a wave of nostalgia, take a moment to view these retro photos and defining moments from our network's past.

After 19 children and two teachers were killed at Robb Elementary School in Uvalde, Texas, last week, extraordinary trauma continues to haunt several survivors and the community alike. Questions are now being asked about whether or when a school devastated by carnage should reopen. In many cases, other schools affected by deadly mass shootings have been closed or renovated entirely to decrease traumatic reminders. President Joe Biden, who visited Uvalde on Sunday, told Texas State Sen. Roland Gutierrez "we're going to look to raze that school, build a new one," but plans to do so have not yet been announced. As the investigation remains ongoing, authorities are offering shifting details of what happened during the shooting. Here is CNN's timeline of the events.

Supreme Court officials are escalating their search for the source of the leaked draft opinion that would overturn Roe v. Wade, taking steps to require law clerks to provide cell phone records and sign affidavits, three sources with knowledge of the efforts have told CNN. The probe has intensified the already high tensions at the Supreme Court, where the conservative majority appears poised to roll back a half-century of abortion rights and privacy protections. Some clerks are apparently so alarmed by the sudden requests for private cell data, that they have begun exploring whether to hire outside counsel. The young lawyers selected to be law clerks each year are regarded as the elite of the elite. They are overwhelmingly graduates of Ivy League law schools and have had prior clerkships with prominent US appellate court judges.

President Biden said the US is providing Ukraine "more advanced rocket systems and munitions" as its war with Russia grinds on. The new systems will enable Ukraine to hit targets 50 miles away -- a range far greater than anything the country has been sent to date, US administration officials say. This will be the 11th security assistance package sent from the US to Ukraine. Meanwhile, at least 243 children have died and hundreds of others have been injured in Ukraine since the Russian invasion began in February, the Ukrainian prosecutor general's office said today, which marks Children's Day in Ukraine. This grim statistic comes as Russian troops are actively "storming" the eastern Ukrainian city of Severodonetsk, the head of the Luhansk regional military administration said, adding Russians now control "most" of the city.

Travel industry leaders are pressing the Biden administration to end its requirements that vaccinated international travelers take a Covid-19 test before flying to the US. Groups representing several major US air carriers -- including American Airlines, United Airlines, Southwest Airlines and Delta Air Lines -- said yesterday the requirement does not match the current threat from Covid-19. They also say the requirement is negatively impacting the US economy. Roger Dow of the US Travel Association said in a separate statement that while restrictions on many other businesses have been lifted, "the travel industry remains disproportionately harmed by this requirement." Others across the industry have criticized the policy as out of date for months.

With President Biden facing near-record low approval ratings five months before the critical congressional contests, the White House has unveiled a monthlong focus on the economy. A recent CNN poll found that 59% of Americans disapprove of Biden, while 41% approve. As a result, the administration has sought to renew its attention on the economy amid widespread inflation worries. In fact, Treasury Secretary Janet Yellen said in an exclusive interview yesterday on CNN that she was incorrect to believe last year that inflation was not a long-term threat. The White House is also blanketing TV airwaves with top economic officials in a concerted push to share Biden's message. Administration officials had been booked for 20 television appearances yesterday alone, according to the White House. Plus, Biden is scheduled to deliver a speech on the new monthly jobs report on Friday.

The film's opening weekend was Tom Cruise's biggest debut at the box office over his 40-year career. It also scored a stellar 96% on review site Rotten Tomatoes. Is it on your watch list?

What a thrilling quarterfinal! And props to the supportive crowd who watched the entire match until 1 a.m. local time in Paris.

Woodpecker gets tangled in woman's hair

The woman said her hairstyle looked like a nest, so understandably, the bird got a little confused. See what happened in this short video.

Tesla should be worried about this electric luxury car

This 1000-horsepower electric vehicle has already sold out after spending a decade in development.

A ventriloquist surprised the judges on 'America's Got Talent'

Check out this unique and shockingly believable performance.

Famed Indian singer Krishnakumar Kunnath, known by the stage name of KK, died yesterday just hours after performing at a concert in the eastern Indian city of Kolkata, according to hospital officials. The 53-year-old singer gained popularity in the country and throughout the diaspora for lending his voice to hundreds of Bollywood films.

That's how many people were killed in Haiti last month due to surging gun violence, according to a new UN report. Heavily armed rival gangs began clashing and seizing territory in Port-au-Prince with new intensity in April, forcing more than 16,800 people, including children, to abandon their homes and shelter in temporary accommodations.

"I knew there would be scrutiny against me if I competed as a woman. I was prepared for that. But I also don't need anybody's permission to be myself and to do the sport that I love."

-- Transgender swimmer Lia Thomas, saying that trans women are "not a threat to women's sports" in an interview with ABC yesterday. In March, the former University of Pennsylvania swimmer became the first transgender athlete to win an NCAA Division I title in the women's 500-yard freestyle event. Thomas previously swam for the men's team at Penn in 2017 before undergoing her transition. Now out of college, Thomas says her goal is to swim at an Olympic trials.

A note for our readers: Today is the first day of Pride Month, when the world's LGBTQ communities come together and celebrate the freedom to be themselves. Learn more about LGBTQ trailblazers and their fight for equality here.

This man lives in an airplane

Take a look inside this unique living environment! You may assume it would get a little boe-ing to live alone in a plane in the middle of the forest, but this man loves it. (Click here to view)