5 things that could happen in Ukraine next 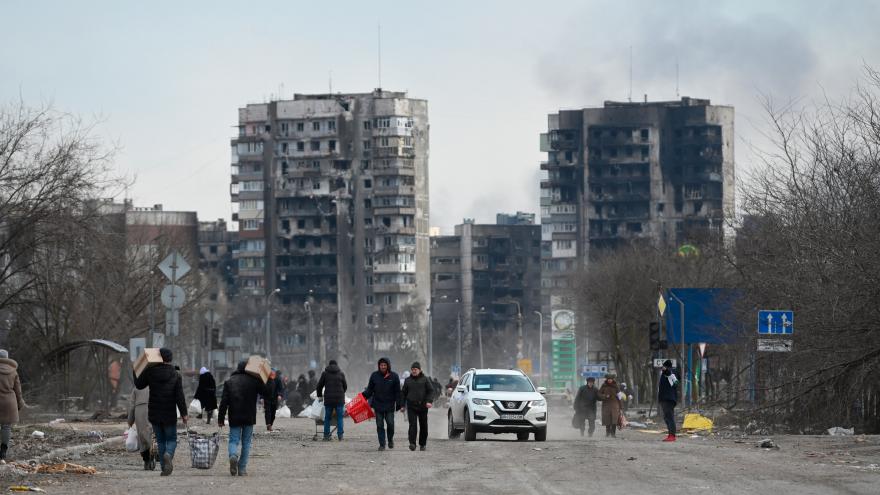 (CNN) -- It's been a month since Russian troops invaded Ukraine, and despite making some rapid early gains, their advancement on some key cities, including the capital of Kyiv, has slowed.

While there's a growing picture that Russia's assault on Ukraine has not gone to plan, the country continues to use its air power to obliterate cities and target civilians to push Ukraine into submission.

So where is this war going? Here are five things to watch out for in coming weeks.

1. Russia could intensify its bombing campaign

Experts are warning that the more Russia takes a hit on the ground, the more likely it is to intensify its aerial bombing campaign and the use of other "standoff" weapons that put Russian soldiers in less danger.

There is little reliable information coming out of either Ukraine or Russia on death tolls, but a report in a Russian tabloid on Monday suggested that the Russian side had lost nearly 10,000 soldiers and that another 16,000 had been injured.

The Komsomolskaya Pravda website removed the numbers later in the day, claiming the numbers only appeared in the first place because it had been hacked. CNN could not verify the numbers, but the death toll is closer to what US intelligence agencies have been reporting.

And in the region of southern Mykolaiv, local authorities are mulling what do with hundreds of Russian corpses.

Such losses, if proven to be true, would explain both the stall in ground movement and the uptick in aerial bombing of key cities and other standoff attacks. A senior US defense official, for example, said Russia has begun firing on the southern city of Mariupol from ships in the Sea of Azov.

"Russia still has capabilities and reserves, and there's going to be an uptick in intensity as it makes an effort to bring in more troops," Jeffrey Mankoff, a distinguished research fellow at the US National Defense University's Institute for National Strategic Studies, told CNN.

A recent UK Defense Ministry update said that Russia was pulling in troops from across the country, and as far away as its Pacific Fleet. It is also pulling fighters from Armenia and private military companies, Syrians and other mercenaries, it said.

The question is how long Russia can continue with high losses of personnel.

"There's going to be more troops and other equipment and help, of course, but there is a point where it's going to be hard to sustain this kind of an operational tempo, particularly the figures that we've been hearing about both in terms of men and material losses, when it outstrips the ability to resupply," Mankoff said.

2. While there's focus on Kyiv, Russia may try to encircle Ukrainian fighters in the east

There is a lot of talk about the Russian war effort stalling, but whether or not that's true comes down to what Moscow's objectives were in the first place. Even that's hard to know for sure, as the country's public justification for its invasion is clear propaganda -- the "denazification of Ukraine," for example.

It's likely that Russia is, at the very least, trying to absorb parts of eastern Ukraine. Areas like Donetsk and Luhansk, which make up the Donbas region, have been controlled by Russian-backed separatists since 2014, when Russia annexed Crimea, and while Russia's ambitions may stretch beyond Donbas, it's still likely a central focus, experts say.

While there is a lot of attention on Russia's push toward Kyiv, most of the Ukrainian army remains near Donetsk and Luhansk, where they are grouped as the Joint Forces Operation (JFO). The movement of Russian troops suggest they are trying to encircle the JFO on three axes, and this is likely to be Russia's main focus. That's clear by looking at the sophistication of the kind of troops being sent there, said Sam Cranny-Evans, a research analyst with the Royal United Services Institute.

"The Southern Military District -- in Donetsk, Luhansk, Mariupol, Berdyansk, Melitopol -- these are the best troops in the Russian army. And they always work. They're designed to fight NATO," Cranny-Evans told CNN.

"So the forces that were committed to the Kyiv encirclement suggests that it was a goal that either Russia thought would be easily achieved, or they overestimated the capabilities of those forces. So that leads, in part, to the conclusion that an encirclement of the Ukrainian troops in the JFO is part of the goal that Russia is looking to achieve. And the movements of Russian forces do seem to suggest that that is the case."

He added that the Western media was so focused on Russia's losses and Ukraine's defiance that it was giving a false sense of the dynamics of the war.

"If we look at these maps, it's clear that Russian forces have actually advanced a long way into a very big country. They have taken quite a few towns, so there are now a lot more Ukrainian citizens living under Russian rule than there were three weeks ago," Cranny-Evans said.

"Regardless of how many Russian vehicles have blown up, or how many Russian soldiers are killed, there's also likely to be a very high number of Ukrainians that have suffered a similar fate."

3. There will be more talk about talks

One scenario is that the Ukraine war could become a protracted conflict. But it's likely that Russia has lost a significant number of soldiers, weapons and equipment in the war, and while it has engaged in long-running conflicts in the past, it won't want to leave this one with its military totally destroyed.

So it may be willing to take talks seriously, analysts say.

"The negotiations are the one area where things are looking a little promising because both Russia and Ukraine have said in the last week that they're moving towards an actual substantive discussion, instead of Russia just laying down an ultimatum," Keir Giles, a Russian expert at the UK-based think tank Chatham House, told CNN.

Russian officials have said that their demands include Ukraine dropping its pitch to join NATO and to demilitarize and adopt a "neutral" status, like Austria and Sweden have. But the conditions for what that means for Ukraine would have to be negotiated.

President Vladimir Putin's chief spokesman, Dmitry Peskov, told CNN in an interview Tuesday that Russia also wanted Ukraine to accept that Crimea -- which Russia annexed in 2014 -- is officially part of Russia and that the breakaway statelets of Luhansk and Donetsk "are already independent states."

Numerous experts have speculated that Russia will look to carve off parts of eastern Ukraine.

"It's going to be painful to deliberate, unless it becomes possible for Western aid, both military and humanitarian, to be absorbed in Ukraine at sufficient rates that they can genuinely turn the tide against the Russian advancement," Giles said.

"If it's a question of who can pour in the greater resources and take the greater pain in order to prevail, Russia has a track record for inflicting substantial economic damage on itself and suffering on its own population, in order to prosecute wars," said Giles, referring to sanctions that are starting to bite the Russian economy.

But US officials are not so optimistic talks will go well. US Secretary of State Antony Blinken said at a press conference last week that a diplomatic solution to the war was unlikely, saying that Russia's actions "are in total contrast to any serious diplomatic effort to end the war."

He also suggested that Russia would escalate the war by using chemical weapons.

4. There could be wholesale 'deportations' of Ukrainians into Russia. That's worrying

Russia has been telling residents of the southern city of Mariupol to leave as it carries on an aggressive aerial bombardment that has torn the city to pieces. It forces have opened what they call "humanitarian corridors" to allow civilians to flee, but tens of thousands of them have been transported to Russia.

But Mariupol council accused Russia of forcing residents to go to Russia against their will. "Over the past week, several thousand Mariupol residents have been taken to Russian territory," the city said in a statement.

Mariupol mayor Vadym Boichenko said Saturday that "what the occupiers are doing today is familiar to the older generation, who saw the horrific events of World War II, when the Nazis forcibly captured people."

Giles said there was a concern of a reprise of that dark history in the coming weeks.

"Russia has a history of vicious and savage reprisals against civilians in any area when any kind of resistance movement is taking place. It's moved already to deport people from Mariupol to the remote parts of Russia, which is straight out of Russia's 20th century script for dealing with these problems," he said.

Giles referred to the "deportations" of hundreds of thousands of people from the Baltic states of Estonia, Latvia and Lithuania, which Russia annexed into the Soviet Union at the start of World War II.

"'Deportation' is a euphemism. It's been used as a fairly innocuous term for what happened to these people, which was effectively enslavement and starvation. is shipping off the women, the children, the people that you want to remove from societies in order to neutralize them," Giles said.

"They are generally met with pretty horrific fates. If they survived at all, they did not return for years or decades."

5. Millions more Ukrainians could flee, leaving a nation in pieces

The fate of the war is one thing, but the fate of Ukraine is another. Just as Russian air power left some of Syria's cities and towns in rubble, parts of Ukraine are beginning to look the same.

Already, more than 3.5 million Ukrainians have left the country. Most are women and children, meaning families are also being torn apart. The war has triggered the biggest movement of refugees Europe has seen since World War II. Those numbers are increasing at a rate of around 100,000 people a day.

If you include the number of people internally displaced, 10 million Ukrainians have now left their homes. That's nearly a quarter of the country's population.

And what past wars show is that refugees often never return to their home countries. So often there is little to return to. Sometimes the threat of yet another war is enough to keep refugees away.

It's something that negotiators will need to think about in any talks on the horizon. Even if a diplomatic solution can be found to end this war, a question that will remain is whether it's enough to prevent the next one, Cranny-Evans said.

"If we look, historically, at authoritarian regimes that perform poorly in a military setting, they don't tend to change their behavior in a positive direction afterwards. So the question might be that if the Ukrainians say, 'OK, we will be neutral, just get out,' the Russians might say 'No, you have to give us Donetsk and Luhansk. That might be bearable for Ukraine, perhaps, in order to stop the war," he said.

"But what if, for instance, 10 years down the line, Ukraine has advanced on a significant military modernization? Or the next Russian president wants to prove his worth, and they conduct another war? There are a lot of scenarios to think through in terms of what ending this war could lead to."