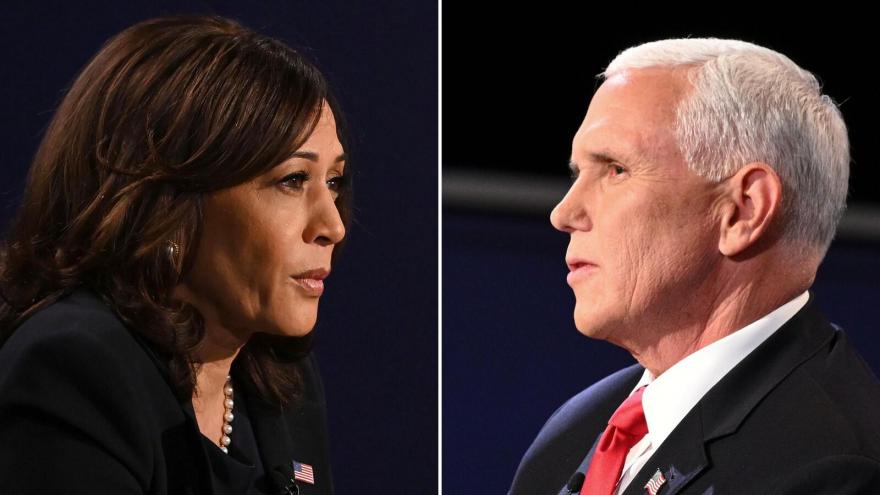 In the vice presidential debate Wednesday night in Utah, Vice President Mike Pence blew through the moderator's efforts to enforce time limits -- but was more polite about it than President Donald Trump was last week.

The two offered no direct answers on whether they'd discussed the transfer of power with the tops of their tickets -- two men who are vying to be the oldest person ever elected president, in the middle of a pandemic.

Harris, who is known for her sharp questioning of Trump nominees in Senate committee hearings, often played it safe -- keenly aware of the racial and gender dynamics present as the first Black and South Asian women to participate in a general election debate. She did, though, fire back at Pence when he spoke over her.

"Mr. Vice President, I am speaking," she said when Pence interrupted an answer on the coronavirus pandemic.

Overall, the debate ultimately was about Trump, with Harris offering blistering criticism of the administration's record on the pandemic and Pence defending the President at every turn.

Here are five takeaways from the vice presidential debate:

If Pence isn't exactly known for providing forthright answers to questions in interviews or press conferences, his avoidance of answering moderator Susan Page of USA Today's questions on Wednesday seemed to reach new levels of evasion.

"Stop playing politics with people's lives" is a phrase you would probably expect during a debate this year -- just not coming from someone working for Trump. Nevertheless, Pence made the accusation, saying Harris was undermining confidence in an eventual coronavirus vaccine by saying she wouldn't take it unless it was endorsed by public health experts.

"The fact that you continue to undermine public confidence in a vaccine, if a vaccine emerges during the Trump Administration, I think is unconscionable," Pence said. "Senator, I just ask you, stop playing politics with people's lives."

His attack seemed to ignore the repeated efforts by Trump to explicitly insert politics into the pandemic, including efforts to develop a vaccine.

He also told Harris she wasn't entitled to her own facts, despite the Trump administration's own poor relationship with facts.

Harris opened the night with a swift condemnation of the Trump administration's handling of the coronavirus pandemic, noting that some 210,000 people have died and more than 7.5 million people have contracted the disease.

"The American people have witnessed what is the greatest failure of any presidential administration in the history of our country," Harris said, arguing that frontline workers had been treated like "sacrificial workers" and that Trump had repeatedly minimized the seriousness of the virus, while discouraging people from wearing masks.

Harris played it safe for much of the night Wednesday -- a tactic available to a ticket that polls have shown is leading by double-digits nationally and is ahead in every crucial swing state. A source close to the campaign told CNN's Jake Tapper that Harris "went into it aware of the various dynamics and to thread the needle on balancing being assertive and letting it go at points. Women are judged differently, it's a needle we have to thread all the time and of course she has been the only woman and the only Black woman in many spaces."

But she cast Trump's administration as incompetent on what might be the only issue that matters in the 2020 election.

"You respect the American people when you tell them the truth. You respect the American people when you have the courage to be a leader, speaking of those things you may not want people to hear, but they need to hear so they can protect themselves. But this administration stood on information that if you had as a parent or a worker, if you didn't have enough money saved up, you're standing in a food line because of the ineptitude," Harris said. "They've had to sacrifice far too much because of the incompetence of this administration."

No answers on health, transfer of power

If their answers were any clue, it doesn't seem so. Neither Pence nor Harris wanted to go there; instead, each delivered a response unrelated to the issue and ran out the clock.

For Pence, the issue is touchy. Trump is both extremely guarded about his health and sensitive to suggestions he's unfit for the job. Over the weekend, when Trump was hospitalized with coronavirus, he grew irritated watching speculation on television about whether he would transfer power to Pence, according to people familiar with the matter.

Instead of providing any information about his conversations with Trump on the issue, Pence delivered an entire answer on the 2009 swine flu outbreak, using all of his time.

Later, pressed on whether a president should be transparent about their health, Pence pivoted quickly to expressing thanks on behalf of Trump for the outpouring of support during his bout with Covid.

Harris also seemed mindful of answering a question that could be interpreted as a tacit acknowledgment her running mate might not make it for four years. Instead of providing a full answer about whether a president owes it to Americans to be transparent about their health, she turned to an attack on Trump -- for not revealing his tax returns.

The answers were perhaps not surprising. Health is a sensitive and personal issue that, whether candidates like it or not, informs voters' decisions.

But their lack of answers is unsatisfying for Americans who want to know that plans are in place should the oldest president in history -- which will be true for either candidate should they win -- falls ill or becomes incapacitated.

For the second consecutive debate, Republicans have pushed their Democratic rivals to address whether they would embrace progressives' push to add seats to the Supreme Court. And again, the Democrats dodged.

"This is a classic case of, if you can't win by the rules, you're going to change the rules," Pence said, turning to Harris and asking directly if she and Biden were "going to pack the Supreme Court to get your way?"

Harris did not answer directly, instead saying that the Senate should not move forward with Coney Barrett's confirmation.

"Joe and I are very clear: The American people are voting right now. And it should be their decision about who will serve on (the court) ... for a lifetime," she said.

Biden and Harris have broadly avoided procedural questions about how they would overcome congressional Republicans' intransigence. Progressives are furious that the GOP is moving forward with a Supreme Court nomination now after holding one up for the final 11 months of former President Barack Obama's tenure. And they have insisted that ending the Senate's 60-vote threshold to break the filibuster is the only way to enact major Democratic policies.

The Democratic ticket has been willing to take occasional punches from Republicans on those questions in order to avoid triggering full news cycles around their answers to date. It's not clear whether that strategy will be sustainable.

Plexiglass serves as a Covid reminder

Harris might have won the debate before she and Pence took their seats Wednesday night in Utah.

The plexiglass barriers erected by the Commission on Presidential Debates served as a visual reminder of the coronavirus pandemic that has altered nearly every aspect of American life. And every time Harris and Pence were shown in a single camera shot, the barriers were visible.

Political observers said the debate likely did little to change Americans' votes -- and while both candidates might have delivered lines that can be turned into short clips for ads, neither said anything surprising.

On social media, what drew more buzz than anything either candidate did was a fly that landed on Pence's hair.